A Carrollwood neighborhood is working to stop more speeding and crashes in their neighborhood.

HILLSBOROUGH COUNTY, Fla. — A Carrollwood neighborhood is working to stop more speeding and crashes in their neighborhood.

Residents stood at the corner of Farmington Blvd. and Ehrlich Rd. on Monday morning with signs saying things like "Put your phone down" and "You are driving a deadly weapon" to get drivers in Carrollwood Meadows to slow down. 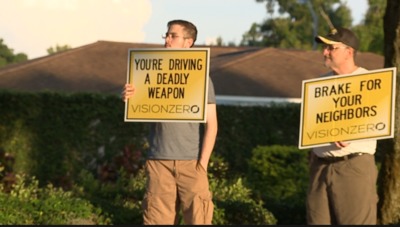 David Fredricks, who helps run the Carrollwood Meadows Neighborhood Association, says he's seen several near misses and has witnessed several crashes in the subdivision that has more than 800 homes.

His wife has also been involved in a crash, he said.

After seeing a recent presentation by Vision Zero, Fredricks says his community was inspired to put on their own event to reduce speeding and put forth a clear message.