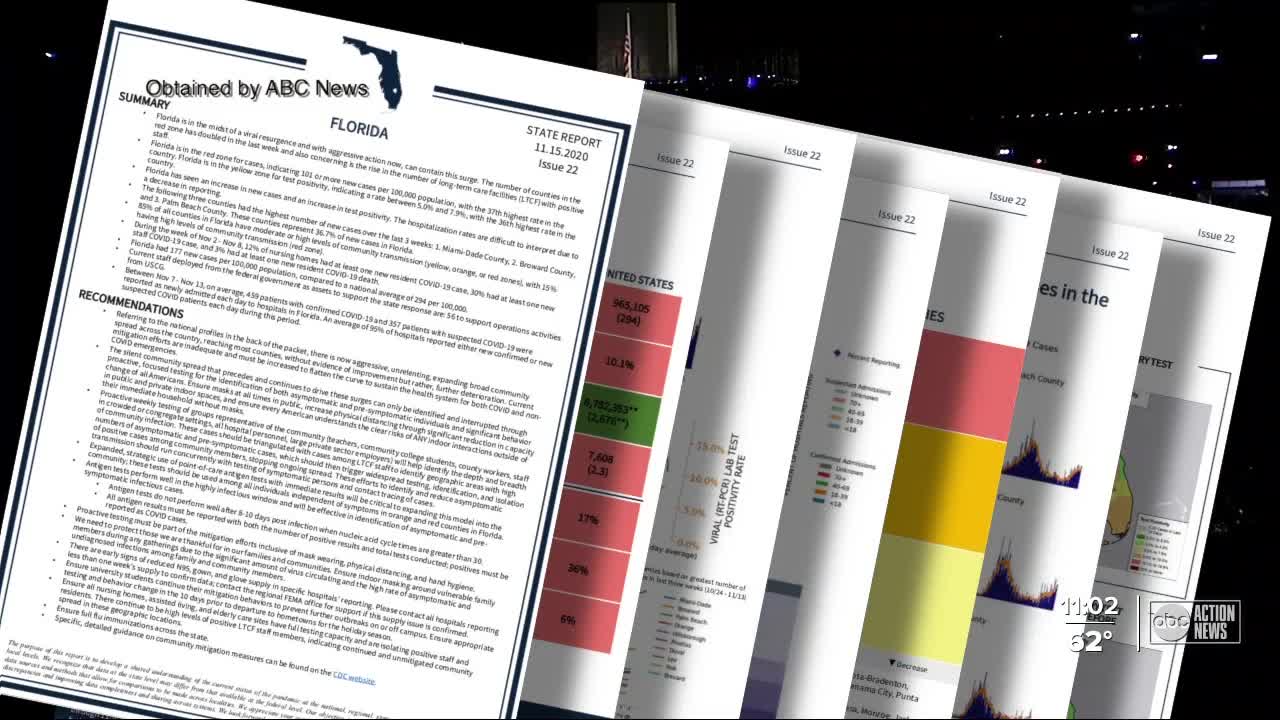 A report from the White House is detailing what it calls a resurgence of the virus in Florida. 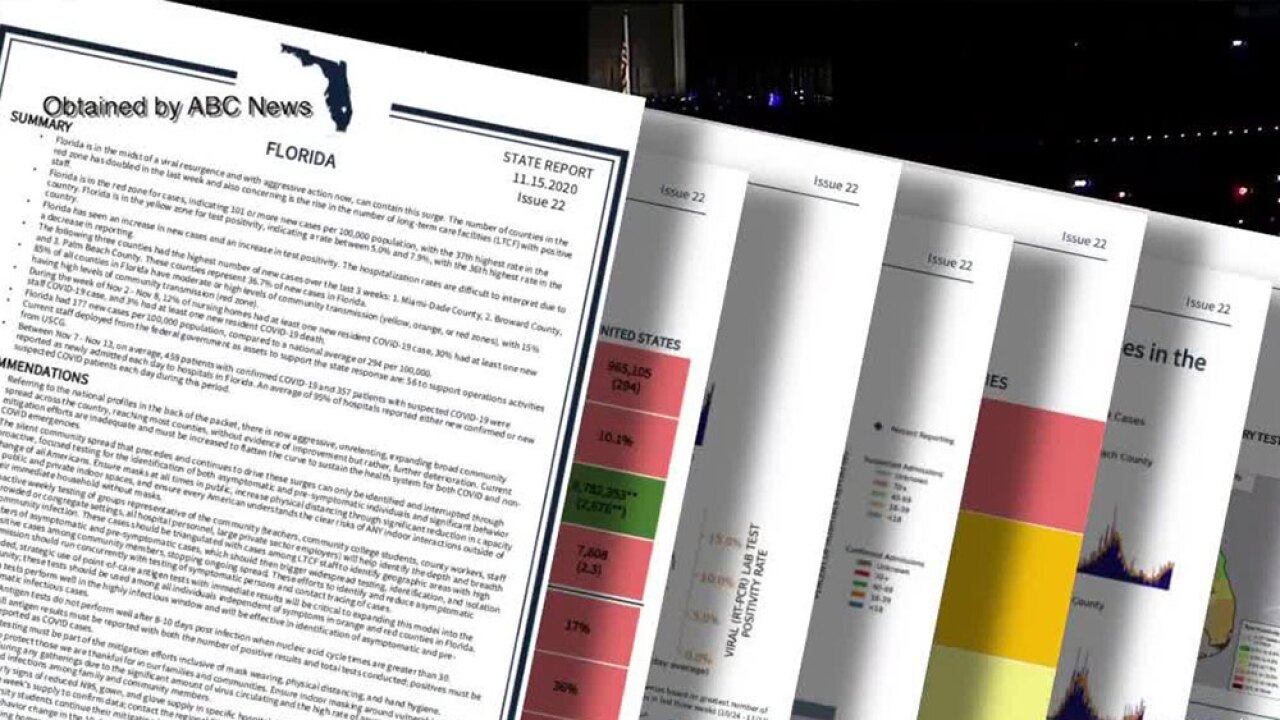 TAMPA, Fla. — While the fight against COVID-19 carries on, the most recent weekly White House Coronavirus Task Force briefing obtained by ABC News offers more insight into the virus in Florida.

The briefing for governors, dated Nov. 15, said Florida is in a viral resurgence “…and with aggressive action now, can contain this surge.”

“We’ve had a 40% increase in the positivity rates just over the past two weeks and it’s beginning to climb throughout the state,” said Dr. Jay Wolfson, an associate dean at USF’s Morsani College of Medicine. “Of course with the highest rates being down in South Florida but every county in this state is affected in a way that is not positive for the health of those communities.”

The report noted a concern in the rise in the number of long term care facilities with positive staff.

It also said the number of the counties in the red zone doubled in the last week. While the briefing notes more than a third of new cases were from Miami-Dade, Broward and Palm Beach counties, it said 85% of all counties have moderate or high levels of community transmission.

Hillsborough, Pinellas, Polk and Pasco Counties were listed in the top 12 counties for the state based on the number of new cases in the past 3 weeks.

“We’re less bad than some of the other states but the flame is on underneath us and it’s going to start boiling as a consequence of the natural trends we are seeing within our state today,” Wolfson said.

Wolfson said if the same trajectory continues, it’s possible to see 15,000 cases a day. He points to fatigue and complacency.

“Unless we take very aggressive preventive steps that rate is going to increase to that horrible number in January and we can’t afford to close the state down again,” he said.

St. Petersburg is getting ready to launch a public information campaign. The city’s mayor plans to join others in a news conference addressing COVID-19 efforts Wednesday.

“The last thing we want to do here in St Petersburg is shut things down again. We’re seeing it happen around the county,” Mayor Rick Kriseman said.

“We, at the City of Tampa are vigilantly watching the trends of COVID-19 as the numbers tick in the wrong direction. We are working around the clock with our partners at the county, the region, the state and our medical institutions to look towards additional measures we can implement to keep our community safe. The next few weeks are critical as we move through the holidays a significant number of cases are being traced to family gatherings and events that bring people in close proximity. There is no doubt we are all frustrated and fatigued by restrictions associated with this pandemic, but we must remain vigilant and do our part to stop the spread. Stay safe, wash your hands, social distance, wear a mask.”

ABC Action News reached out to the state for a comment. While we haven’t heard back, Governor Ron DeSantis previously offered thoughts on restrictions in September after easing restrictions on bars and businesses when numbers were lower.

"We're also saying in Florida everybody has the right to work, every business has the right to operate. Some of the locals may be able to do reasonable regulations, but you can't just say no. you can't say no after six months and just have people twisting in the wind,” he said at the end of September.

The briefing offered recommendations. Referring to national profiles, it stated “Current mitigation efforts are inadequate and must be increased to flatten the curve to sustain the health system for both COVID and non-COVID emergencies.”

Under Florida’s recommendations, like other states as well, the briefing pointed to proactive, focused testing, weekly proactive testing of groups representative of the community to identify the depth of community infection and expanded strategic use of antigen tests, including “among all individuals independent of symptoms in orange and red counties in Florida.”

The briefing said proactive testing should be a part of mitigation efforts, including wearing masks, physical distancing and hand hygiene. It noted indoor mask wearing around vulnerable family members during any gatherings and ensuring testing and behavior change in university students 10 days before they head home for the holiday season. It also said to ensure long-term care facilities have full testing capacity and are isolating those positive and to ensure flu shots across the state.

Some area hospitals noted they do not have PPE shortages at this time and are adequately stocked.

The hospital is offering free rapid antigen tests ahead of Thanksgiving during a drive-through event on Nov. 24 from 9 a.m to 12 p.m. on a first come first serve basis.

BayCare Health System is also offering a rapid test to detect COVID-19 and the flu for those who are asymptomatic ahead of the holiday season, available for $150.

“We are noticing an increase in demand for testing at our drive through sites and an increase in hospitalizations as well. We remain ready to help support the community in this time of need,” a spokesperson stated.

The AdventHealth West Florida Division said its hospitals are prepared to care for patients, including those with COVID-19.

“While we have seen a slight uptick in cases, this has not impacted care as our hospitals are designed to create flexible and expandable spaces as needed. We also have sufficient personal protective equipment (PPE), ventilators and specialized equipment available to quickly and safely convert existing spaces in the hospital into standard patient rooms or ICU/critical care rooms if there is increased demand,” a spokesperson stated, noting their at-home patient monitoring and use of telemedicine.