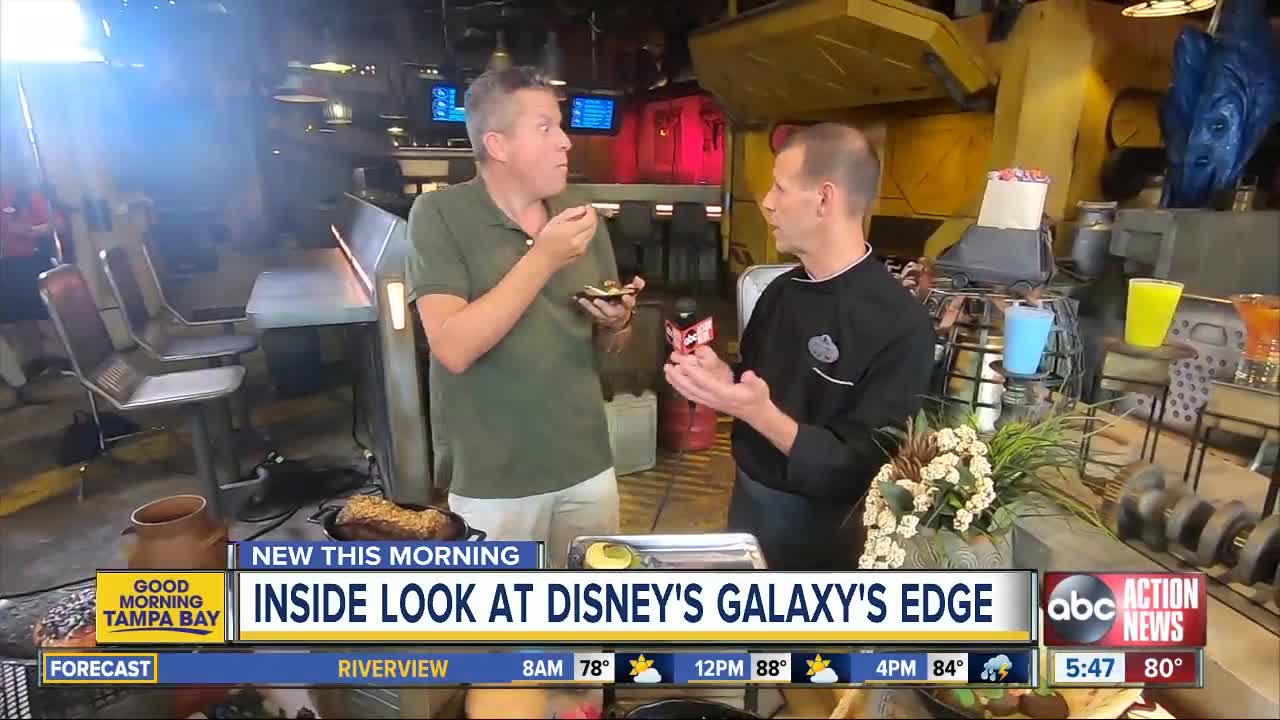 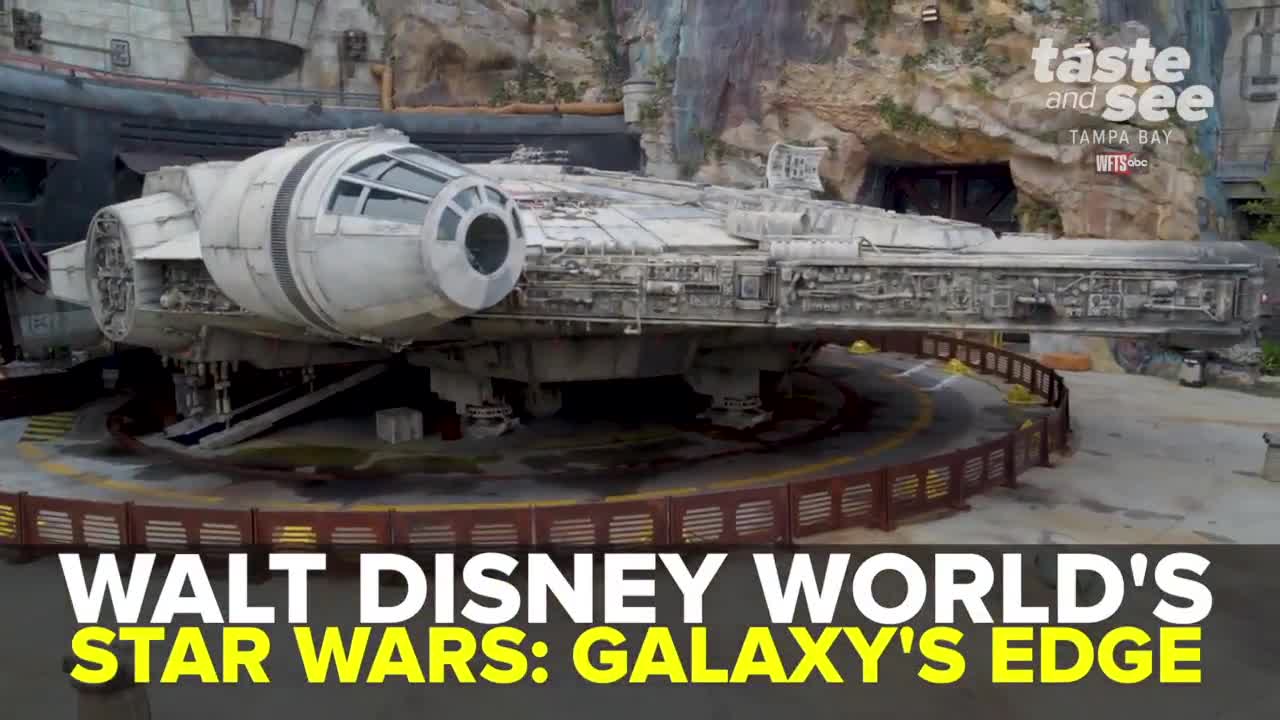 Guests will be transported to a galaxy far, far away on a journey to the planet Batuu, the newest location in a story that began in 1977 with the first Star Wars film.

Become part of the story as you sample galactic food and beverages, enter an intriguing collection of merchant shops and take the controls of the most famous ship in the galaxy aboard Millennium Falcon: Smugglers Run starting Thursday, August 29.

For more than four decades, fans of Star Wars films have imagined what it would be like to blast across the stars inside the Millennium Falcon or race through the halls of a Star Destroyer. Star Wars: Galaxy’s Edge will feature two signature attractions that turn those dreams into reality.

In Millennium Falcon: Smugglers Run, guests climb into the cockpit of “the fastest hunk of junk in the galaxy” for their own Star Wars adventures. They take the controls of the Falcon in one of three unique and critical roles as the ship hurtles through space. Some will be pilots, some gunners and some engineers, creating multiple ways for guests to engage with the attraction in an experience that responds in real time to the actions they take.

A second attraction, opening Dec. 5, 2019, at Disney’s Hollywood Studios, is Star Wars: Rise of the Resistance, one of the most ambitious, advanced and immersive experiences ever undertaken by Walt Disney Imagineering. It places guests in the middle of a climactic battle between the First Order and the Resistance, including a faceoff with Kylo Ren. Their journey takes them aboard a full-size transport shuttle and then into a nearby Star Destroyer on a harrowing and thrilling adventure that blurs the lines between fantasy and reality.

Welcome to the Edge of Wild Space: Black Spire Outpost on Batuu

Batuu is a far-flung destination along the galaxy’s Outer Rim, on the frontier of Wild Space – the uncharted region beyond all known star systems. The planet is home to Black Spire Outpost, an infamous port for smugglers, traders and adventurers wishing to avoid any unnecessary entanglements with the First Order.

When guests arrive at Black Spire Outpost, they will come across aliens, droids and other inhabitants of this planet as they search for rare and unique goods, discover unusual food and drink, or join a crew seeking adventures. Along the way, guests may encounter some familiar faces, including Rey, Chewbacca or even Supreme Leader Kylo Ren and his Stormtroopers.

A Diverse Menu of Food and Beverages Await

What does Blue Milk or Green Milk actually taste like? That question and more will be answered when guests visit Star Wars: Galaxy’s Edge and experience the new land’s expansive array of food and beverages. Vendors offer various local favorites such as an Outpost Mix of flavored popped grains from Kat Saka’s Kettle, a unique popcorn snack with a combination of sweet, savory and spicy flavors.

At Oga’s Cantina, even the blaster-bolt scorches on the walls tell a story. Here, guests gather to share their tales from around the galaxy as they enjoy exotic beverages served in unique vessels and listen to spirited musical entertainment provided by DJ R-3X, otherwise known as Rex, the former Starspeeder 3000 pilot droid from the original Star Tours. Rex re-invents himself as the cantina’s DJ, and he’s as quirky and talkative as ever.

A multi-purpose transport shuttle docked on top of a large hangar beckons guests into Docking Bay 7 Food and Cargo, a designated location for traveling food shuttles.

Elsewhere, Ronto Roasters draws attention with its large podracing engine firing up a barbecue pit for mouth- watering Ronto Wraps. When hungry customers queue up to order, they encounter a former smelter droid, carefully turning the spit of meats. Guests can also choose from a variety of exotic non-alcoholic drinks like the Sour Sarlacc or Tatooine Sunset.

The Droid Depot invites guests to construct their own astromech droids. Patrons pick pieces off a conveyor belt to build one of two core models (R-series or BB-series) and they can customize their droids with various parts and colors. These droids interact with elements throughout the land, enhancing guests’ adventures. Additional accessories can be added to further customize these new friends. In addition, the Droid Depot offers pre-built droids, droid-inspired toys and apparel, and more.

At Savi’s Workshop – Handbuilt Lightsabers, guests have the opportunity to craft and customize their very own lightsabers. In this mystical experience, guests feel the Force as they build these elegant weapons from a more civilized age.

Inside Dok-Ondar’s Den of Antiquities, guests find a selection of rare and mysterious items for sale, representing different eras of the Star Wars galaxy including holocrons, ancient Jedi and Sith artifacts, lightsabers and more.

In addition to these special experiences, the Black Spire Outpost marketplace features the Creature Stall dedicated to the plethora of rare and fascinating creatures that populate the galaxy, as well as Black Spire Outfitters, showcasing the latest in galactically trendy apparel and accessories.

When guests choose to use the Play Disney Parks app in Star Wars: Galaxy’s Edge, they will be able to transform it into their very own Star Wars: Datapad. Using the app provides new opportunities for guests to engage with the land, such as translating a galactic language or learning what’s hidden inside crates and containers.