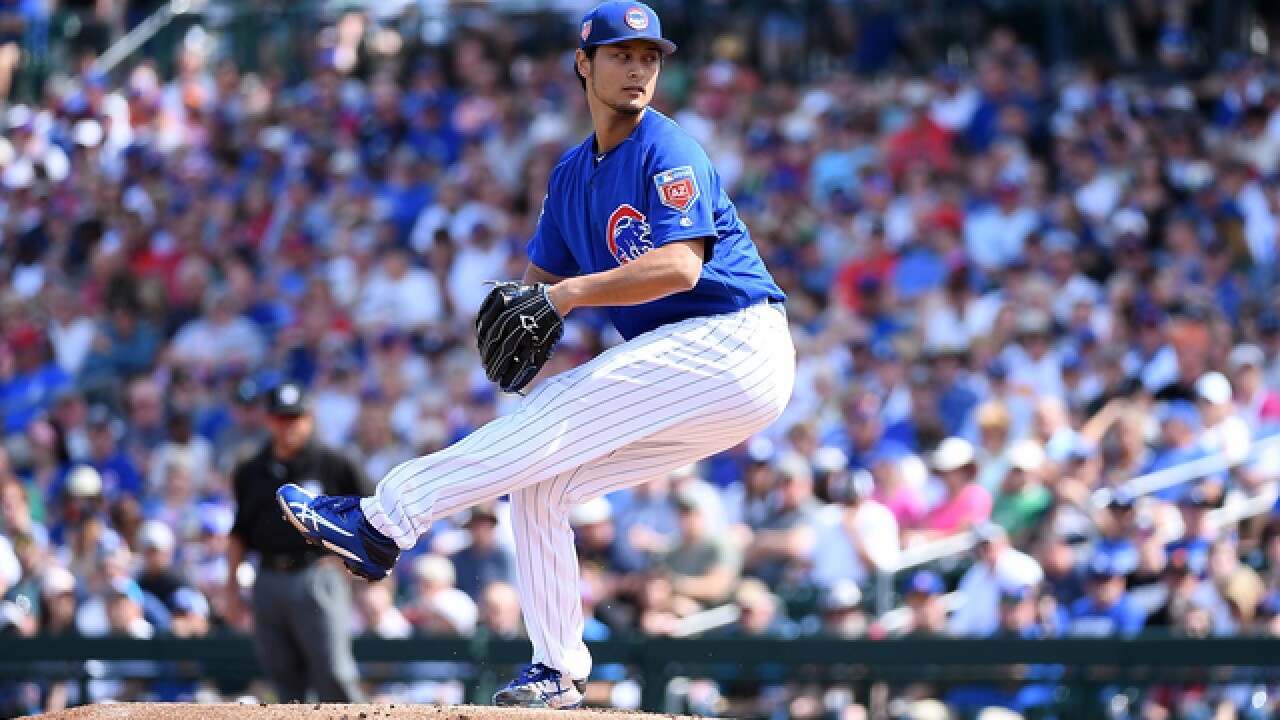 Copyright 2018 Scripps Media, Inc. All rights reserved. This material may not be published, broadcast, rewritten, or redistributed.
Norm Hall
<p>MESA, AZ - MARCH 06: Yu Darvish #11 of the Chicago Cubs delivers a first inning pitch during a spring training game against the Los Angeles Dodgers on March 6, 2018 in Mesa, Arizona. (Photo by Norm Hall/Getty Images)</p>

MESA, Ariz. (AP) — If Yu Darvish was tipping his pitches in the World Series last year, he seems to have fixed it.

Darvish threw two hitless innings in his spring training debut for the Chicago Cubs, facing his former teammates on the Los Angeles Dodgers.

When last on the mound, Darvish was chased by Houston after getting just five outs in both Games 3 and 7 of the World Series. Darvish said he was moved to lose 15 pounds “because of what happened in the World Series.”

Darvish was concerned about the possible impact of the weight loss on his velocity but those worries seemed unwarranted Tuesday.

“It was right up there,” he said of his velocity, speaking through a translator. “Glad it’s 95.”

There was speculation that the Astros had figured out what sort of pitches Darvish was about to throw.

“They could simply be a good, strong team,” Darvish said, adding he has considered “various things to keep consistency and mix up pitches and throw from the same slot.”

Darvish struck out four, including Corey Seager, Matt Kemp and Yasiel Puig in the opening inning. The Japanese star allowed one run when Chris Taylor walked leading off the game and circled the bases on a pair of wild pitches around a stolen base.

“Everybody is happy here,” he said. “I certainly feel comfortable being a Cub.”

Darvish also has warm feelings toward the Dodgers.

“Every one of them is great. I don’t want to hit any batters. I have that in mind,” he said

He joked with Dodgers manager Dave Roberts, saying he would beat the Dodgers.

“I only said I’m going to beat them in spring training,” Darvish said. “After the first three batters, I think I was able to command my fastball, slider and curve . really well,” he said.

Darvish is coming off a World Series in which he twice was hit hard by the champion Houston Astros, including a rough outing in Game 7 at Dodger Stadium.

“It’s like, ‘Oh, we have to deal with Darvish? We just dealt with (Jon) Lester and (Kyle) Hendricks.’ He can take a hitter who thinks he’s hot and make him not very quickly.”

Third baseman Kris Bryant is happy he doesn’t have to face him anymore.

“He throws hard, so you obviously have to stay on the fastball,” Bryant said. “But his breaking stuff is really sharp. It’s definitely not a comfortable at-bat.”

Notes: Zobrist and newly acquired Brandon Morrow made their spring training debuts, and Zobrist said he may play first base a couple times during the exhibition season. He played left field against Los Angeles and went 0 for 3 ... Morrow, expected to be the team’s closer, gave up an unearned run in one inning. ... The Cubs scored six runs in the first inning, including a two-run homer by Albert Almora Jr. off Wilmer Font. ... Almora made a spectacular diving catch on Taylor’s drive to center in the third.