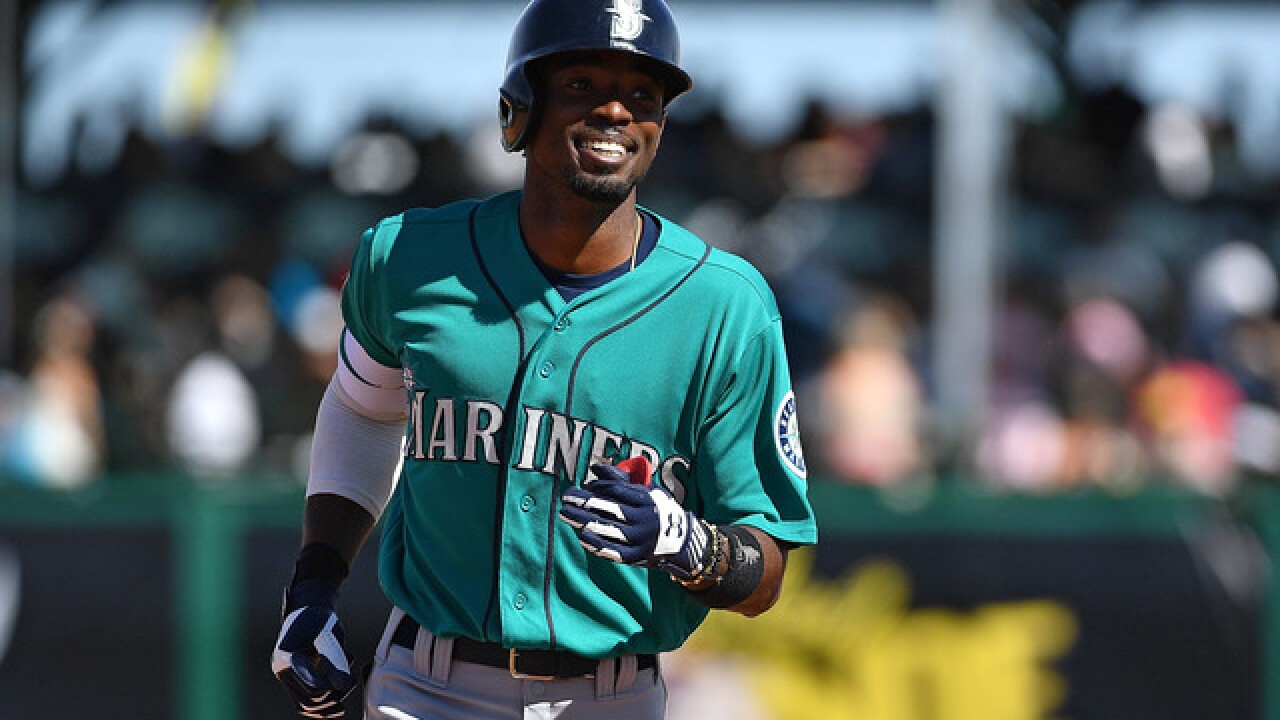 Copyright 2018 Scripps Media, Inc. All rights reserved. This material may not be published, broadcast, rewritten, or redistributed.
Jennifer Stewart
<p>SCOTTSDALE, AZ - MARCH 09: Dee Gordon #9 of the Seattle Mariners smiles while running the bases after hitting a solo home run in the fifth inning of the spring training game against the San Francisco Giants at Scottsdale Stadium on March 9, 2018 in Scottsdale, Arizona. (Photo by Jennifer Stewart/Getty Images)</p>

Cruz hit a two-hop RBI single to the right-field wall in the first inning against Colorado, then walked slowly to the Mariners’ dugout while rubbing his right thigh and slightly favoring the leg. He was replaced by pinch runner Daniel Vogelbach, and the Mariners said Cruz had soreness in his right quadriceps.

Second baseman Robinson Cano left Sunday’s game because of tightness in his left hamstring, and a scan Monday revealed a minor strain, the Mariners said.

Left-hander Marco Gonzales left his start Monday after 1 2/3 innings when he was hit on his right hand by a comebacker off the bat of Leury Garcia of the Chicago White Sox. Gonzales threw to first for the out, then departed. Seattle said he sustained a bruise.

Ace right-hander Felix Hernandez hasn’t pitched in a game since he was hit on the right forearm by a line drive off the bat of the Chicago Cubs’ Victor Caratini on Feb. 26.

A day after finalizing a $12 million, one-year deal with Minnesota, Lance Lynn struck out five in three hitless against Baltimore. He walked one.

“I wanted to go somewhere where they had a chance to win no matter what,” Lynn said. “It seemed like the perfect fit, and I look forward to doing what I have to do, which is take the ball when it is my turn.”

Ryan LaMarre singled and drove in a pair of runs and Miguel Sano doubled.

Miami starter Jose Urena got just one out, giving up six runs and six hits. Carlos Martinez struck out five in four innings and gave up four hits. Marcel Ozuna had two hits, including his third double of spring training, and raised his batting average to .188. Jose Martinez drove in three runs with a double and a single. Cameron Maybin tripled and drove in two runs.

Jesmuel Valentin, the 23-year-old son of former major leaguer Jose Valentin, hit his second home run of spring training in the ninth. Drew Hutchison gave up two homers but struck out five in 2 2/3 innings. Maikel Franco connected off Chris Archer for his second homer of spring training. Archer allowed two runs, one hit and three walks in 4 1/3 innings. Daniel Robertson, a first-round draft pick by Oakland in 2012, doubled and homered.

Bryan Shaw gave up two hits and struck out two in a scoreless ninth. David Dahl homered and drove in two runs. Charlie Blackmon doubled. Taylor Motter had two hits and stole a pair of bases.

Washington ace Max Scherzer struck out nine in five scoreless innings for his third win of the spring. Bryce Harper was 2 for 2 with a double, two walks and two runs scored, and Trea Turner’s two first-inning steals led to a run.

Mets starter Zack Wheeler allowed five runs and seven hits in three innings, raising his ERA to 6.75. New York didn’t have a baserunner until Amed Rosario’s double — the only hit Scherzer allowed — in the fourth.

Addison Russell hit his first home run of the spring over the left-field bullpen, and Ian Happ clocked his fifth for Chicago in front of a Cactus League-record 15,849 fans. Cubs starter Tyler Chatwood struck out nine in five innings of one-hit ball.