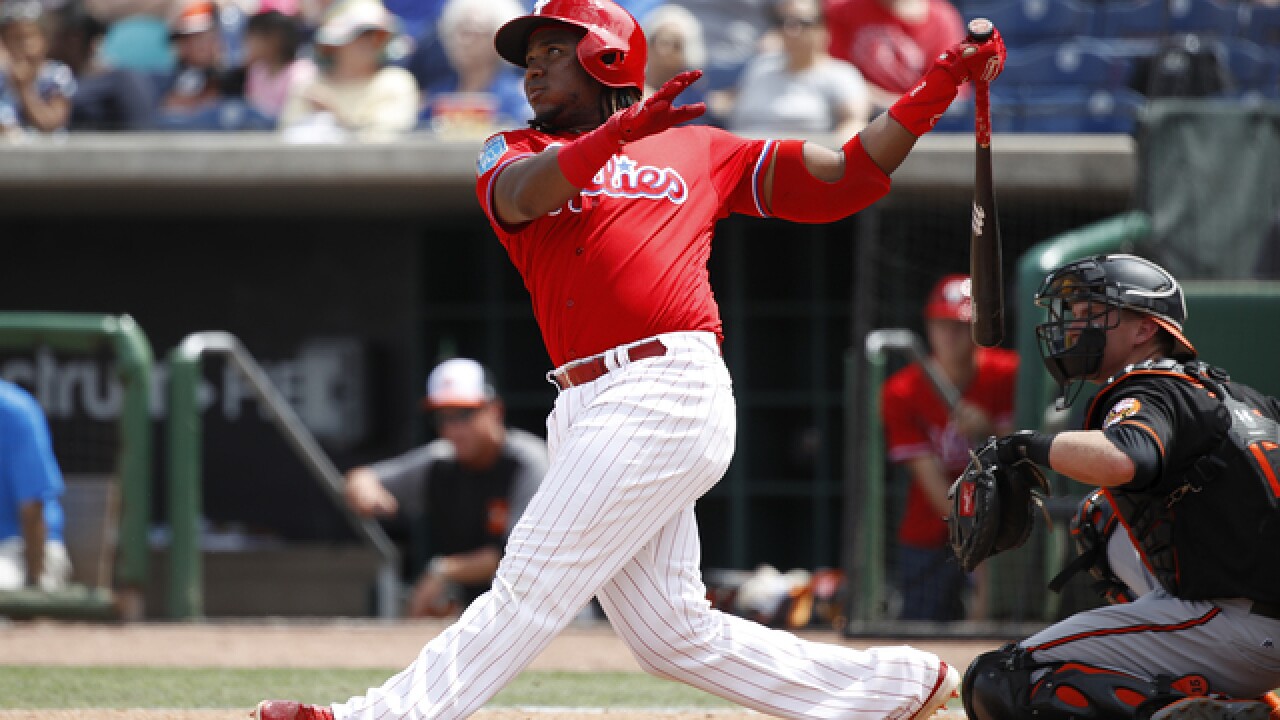 Copyright 2018 Scripps Media, Inc. All rights reserved. This material may not be published, broadcast, rewritten, or redistributed.
Joe Robbins
<p>CLEARWATER, FL - MARCH 25: Maikel Franco #7 of the Philadelphia Phillies hits a two-run home run against the Baltimore Orioles in the seventh inning of a Grapefruit League spring training game at Spectrum Field on March 25, 2018 in Clearwater, Florida. (Photo by Joe Robbins/Getty Images)</p>

The Philadelphia Phillies are banking on young Scott Kingery.

A prized prospect who has never played in the majors, Kingery reached a six-year deal with the Phillies on Sunday that takes him through the 2023 season.

The 23-year-old Kingery is batting .392 in 20 spring training games and is tied for the Grapefruit League lead with 20 hits.

Kingery hit a combined .304 with 26 home runs and 29 steals as a second baseman for Triple-A Lehigh Valley and Double-A Reading last year. He was a second-round pick in the 2015 draft from the University of Arizona.

Kingery is regarded as the best second-base prospect in baseball. The Phillies currently have Cesar Hernandez as their starting second baseman, so Kingery has also seen time at third base this spring and worked in the outfield.

Coming off a 66-96 record and last-place finish in the NL East, the Phillies have been aggressive going into this season. They recently signed former NL Cy Young Award winner Jake Arrieta after previously adding slugger Carlos Santana.

Washington starter Stephen Strasburg struck out 10 in his final tuneup, pitching 5 2/3 innings and giving up two runs on three hits and three walks. Michael A. Taylor and Matt Adams homered for the Nationals. Bryce Harper went hitless in three trips and is batting .283. Tommy Pham had two hits, scoring twice for St. Louis.

The Cardinals said pitcher Adam Wainwright will begin the season on the disabled list after injuring himself during conditioning drills earlier this week. Manager Mike Matheny said rookie Jack Flaherty will move into the rotation.

The Marlins announced top prospect Lewis Brinson has made the opening day roster. Brinson, acquired from Milwaukee in the Christian Yelich trade, is batting .328 this spring, hitting two home runs and driving in nine. The center fielder will hit leadoff when Miami opens at home Thursday against the Cubs.

Maikel Franco hit his sixth homer and Rhys Hoskins hit his fifth for Philadelphia and Roman Quinn stole his ninth base, most in the majors this spring. Chance Sisco and Ruben Tejada both had two hits and scored a run for Baltimore. Sisco, competing with Caleb Joseph for the starting job at catcher, is hitting .429.

Yankees first baseman Greg Bird is set to see a specialist in New York on Monday for inflammation in his right foot.

Mookie Betts hit a pair of home runs and walked, driving in three runs and scoring three for Boston. J.D. Martinez had three hits and an RBI for the Red Sox, while Andrew Benintendi homered for a fourth time. David Price made his final spring start for Boston, pitching three innings and allowing one run on one hit, a home run by Brian Dozier. Minnesota closer Fernando Rodney pitched the fourth inning, allowing three runs on two hits and two walks.

Francisco Cervelli had two hits, including his fourth homer, driving in three runs and scoring twice for Pittsburgh. Jose Osuna hit his fifth home run for the Pirates.

Steve Pearce homered for Toronto while Josh Donaldson went 0 for 3, leaving him at .148 this spring. Blue Jays starter Marco Estrada was rocked in his final tuneup, pitching 2 2/3 innings and giving up five runs on five hits and two walks.

The Indians announced that outfielder Michael Brantley, who had two hits and an RBI, will begin the season on the disabled list. He is recovering from offseason ankle surgery.

Kyle Hendricks pitched four scoreless innings in his final tuneup for Chicago, allowing one hit and issuing two walks. Ben Zobrist had a pair of doubles for the Cubs, scoring a run. Kansas City starter Ian Kennedy gave up one run in five innings.

Chris Taylor and Yasiel Puig each hit a solo home run for the Dodgers in the opener of their annual Freeway Series. Taylor had three hits, including his shot that put the Dodgers up 3-2 in the seventh inning. Puig followed one out later with his third home run in four games.