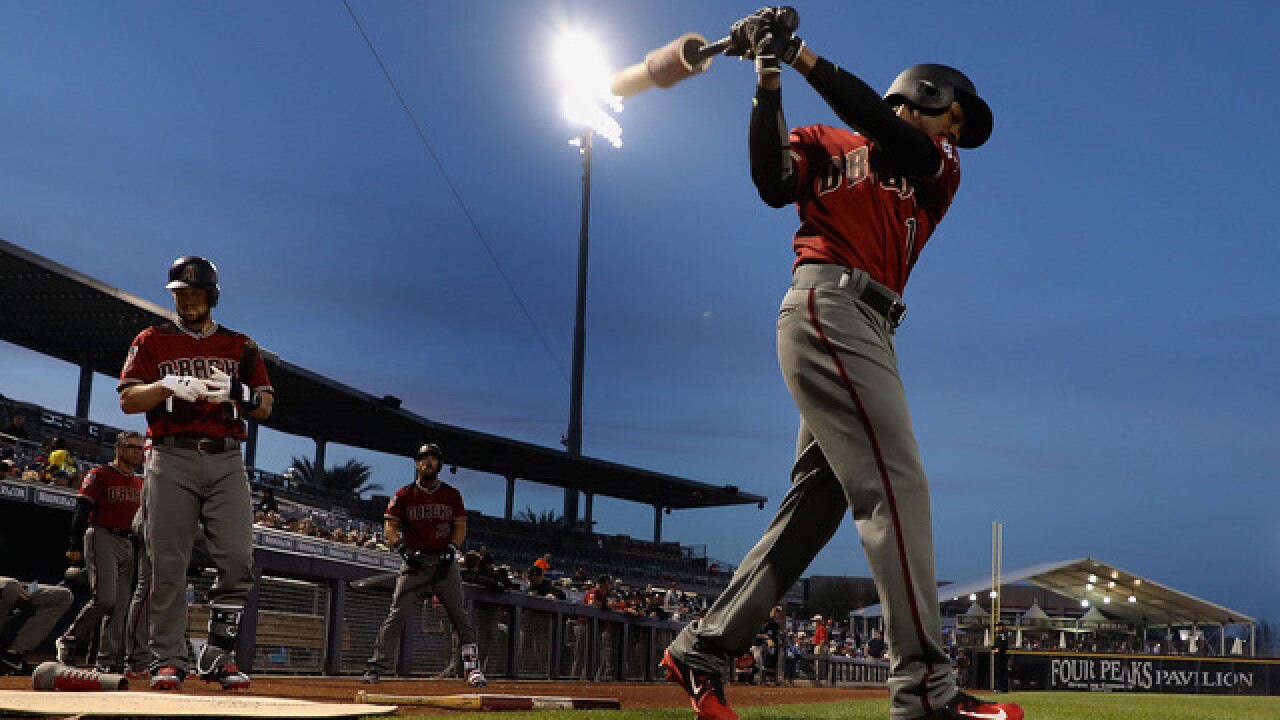 Copyright 2018 Scripps Media, Inc. All rights reserved. This material may not be published, broadcast, rewritten, or redistributed.
Christian Petersen
<p>PEORIA, AZ - MARCH 05: Jarrod Dyson #1 (R) of the Arizona Diamondbacks warms up on deck alongside Steven Souza Jr. #28 during the first inning of the spring training game against the San Diego Padres at Peoria Stadium on March 5, 2018 in Peoria, Arizona. (Photo by Christian Petersen/Getty Images)</p>

Once again, Greg Bird is hurt as spring training comes to a close.

The oft-injured New York Yankees first baseman will need surgery on his ailing right ankle and could be sidelined for two months. The team learned of the setback Monday while in Atlanta for its final exhibition game, three days before the season opener at Toronto.

“Obviously, we were hoping it was going to be a shorter-term thing,” said rookie manager Aaron Boone, who took over a club that reached Game 7 of the AL Championship Series last year. “But we feel like we got some answers. We feel like we know what the surgery’s going to accomplish.”

Bird will have surgery to remove a small broken spur on the outside of his right ankle. Dr. Martin O’Malley is scheduled to operate Tuesday at the Hospital for Special Surgery in New York.

The slugger is expected to be out for six to eight weeks.

“Hopefully this is something he will now put behind him for good,” Boone said. “We feel pretty good that the surgery is fairly minor and they’re going to go in and correct the problem. Then he should be good to go.”

Tyler Austin, who had been ticketed to start the season at Triple-A, and switch-hitting second baseman Neil Walker will likely get the bulk of the playing time at first in Bird’s absence.

“Tyler Austin is ready for this opportunity. He was just blocked by Greg Bird,” Boone said.

The 25-year-old Bird has been promising but injury-plagued since his big league debut in 2015, when he came up from the minors and had 11 homers and 31 RBIs in 46 games.

He missed 2016 after surgery to repair a torn labrum in his right shoulder. Last year, Bird hit .451 with eight homers in spring training but fouled a ball off his right ankle on March 30, started the season 6 for 60 and went on the disabled list May 2.

When the foot did not improve, O’Malley operated July 18 to remove a bone in the ankle.

Bird returned Aug. 26 and hit .253 with eight homers and 25 RBIs in 29 games, then batted .241 three homers and six RBIs in 13 playoff games. Most notably, he homered off Andrew Miller to account for the lone run in a 1-0 victory over Cleveland in Game 3 of the AL Division Series.

Bird struggled this spring, hitting just .154 in 52 at-bats with one homer, one double and four RBIs.

“In the grand scheme of things,” Boone said, “hopefully we do look back and it’s a short-term bump in the road and we can get him back for good.”

Luis Perdomo started for the Padres against their Triple-A affiliate, giving two runs and six hits in three innings. He struck out three. Freddy Galvis hit his first home run of the spring and Cory Spangenberg doubled.

Doug Fister worked two innings in his final spring tuneup for the Rangers, allowing one run and one hit while striking out two. Nomar Mazara and Rougned Odor homered.

Sonny Gray worked five innings for New York, yielding just a run and three hits while striking out seven and lowering his spring ERA to 1.98. Dellin Betances struck out the side and David Robertson tossed a perfect inning in relief. Giancarlo Stanton and Didi Gregorius homered off Atlanta starter Brandon McCarthy.

Toronto prospect Vladimir Guerrero Jr., son of the former Montreal Expos great, got to wear his father’s No. 27 at Olympic Stadium. The 19-year-old Guerrero was given a standing ovation by Montreal fans when he entered in the seventh inning and finished 0 for 2.

Matt Harvey gave up three hits and an earned run over three innings for New York against its Triple-A club. He struck out three in an intrasquad game shortened to seven innings.

Vince Velasquez pitched four innings of three-hit ball for Philadelphia, striking out three. Scott Kingery had three hits, including a double and his fifth home run, raising his spring batting average to .418.

Pittsburgh starter Trevor Williams struck out five over 2 1/3 innings, but was touched for two earned runs and four hits.

Francisco Liriano threw six innings for Detroit, striking out six and scattering five hits. James McCann hit his first home run of the spring and JaCoby Jones went 3 for 3 with a home run.

Andrew Cashner pitched 3 1/3 innings in his final tuneup for the regular season, striking six and allowing an earned run for Baltimore against its Triple-A affiliate in a game that featured the Schoop brothers starting at second base for both clubs.

Jonathan Schoop hit a two-run homer for the parent club, which banged out 14 hits. Scharlon Schoop started and went hitless for the minor league team. Michael Yastrzemski, grandson of the Red Sox Hall of Famer, had two hits for the Tides.

Albert Pujols hit a three-run double in the second game of the exhibition Freeway Series. Pujols cleared the bases against Rich Hill during a four-run third inning.

Angels starter Matt Shoemaker allowed two hits over four scoreless innings. He struck out five and walked one. Two-way sensation Shohei Ohtani was the designated hitter and batted for the first time at Dodger Stadium. He singled his second time up against Hill and finished 1 for 4 to raise his batting average to .125 this spring.

Mark Canha was 4 for 4 with a solo homer and a go-ahead single, and Matt Chapman also went deep for Oakland in the Bay Bridge exhibition series. Canha’s hit off D.J. Snelten highlighted a seven-run outburst in the 10th.

San Francisco lefty Derek Holland gave up two runs in five innings of four-hit ball. He struck out five. Holland will open as the team’s No. 3 starter because of injuries to Madison Bumgarner and Jeff Samardzija.