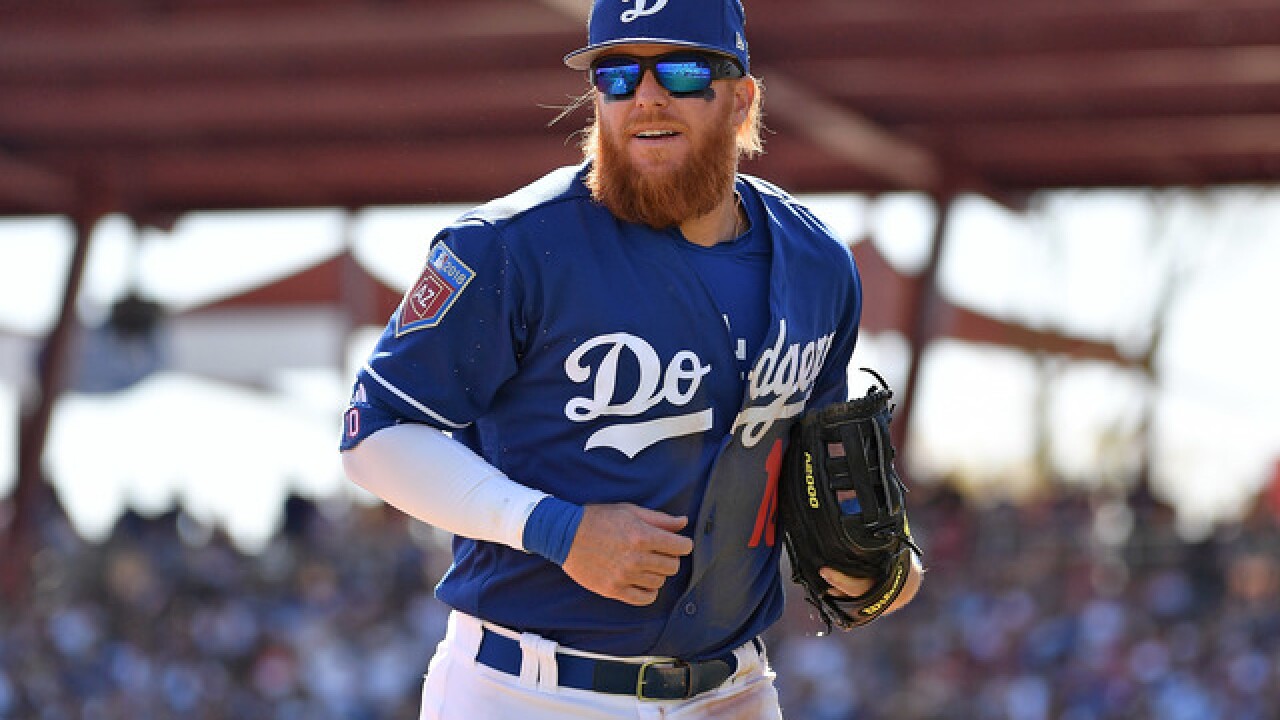 Copyright 2018 Scripps Media, Inc. All rights reserved. This material may not be published, broadcast, rewritten, or redistributed.
Jennifer Stewart
<p>GLENDALE, AZ - MARCH 03: Justin Turner #10 of the Los Angeles Dodgers reacts while running off the field in the spring training game against the Arizona Diamondbacks at Camelback Ranch on March 3, 2018 in Glendale, Arizona. (Photo by Jennifer Stewart/Getty Images)</p>

The Dodgers are going to be without their red-headed slugger on opening day, and possibly for a while after.

Justin Turner has a broken left wrist after being hit by a pitch during Los Angeles’ 3-1 victory over the Oakland Athletics on Monday night.

Turner was struck by a pitch from right-hander Kendall Graveman in the first inning. Turner grunted and winced as he jogged away from the plate toward the dugout, his hand hanging limp at his side. He was quickly visited by a trainer and replaced by Donovan Solano.

“I was hoping obviously the X-rays would be negative, but there’s a small non-displaced fracture,” Turner said. “We’ll just play it by ear, see how it goes.”

General manager Farhan Zaidi said the team didn’t know yet how long Turner would be out, but it should be a matter of at least a few weeks. Turner says he’ll visit the doctor again Tuesday to hopefully learn more.

Los Angeles seems likely to slide Logan Forsythe to third base in Turner’s absence, with Chase Utley or someone else assuming regular duty at second base.

“We’re not as good of a team without J.T.,” Zaidi said, adding “We do feel good about our internal options. There are guys who can move around.”

The 33-year-old Turner hit .322 with 21 homers and 71 RBIs last season. He also led the team and finished third in the majors by getting plunked 19 times.

Graveman and Dodgers left-hander Alex Wood went on to duel for five scoreless innings. Both struck out seven, with Graveman pitching two-hit ball without a walk over 5 1/3 innings and Wood allowing four hits and two walks in five frames.

Diamondbacks ace Zack Greinke will start this season in the dugout.

Arizona manager Torey Lovullo said Monday that Greinke won’t pitch on opening day because of what’s perceived to be a minor health issue.

Greinke exited his latest start after one inning because of tightness in his groin. He’s scheduled to pitch again in spring training Wednesday.

The Diamondbacks don’t want to push him to be ready for their first game March 29 at home against Colorado. Without this wrinkle, Lovullo said Greinke would’ve started the opener for the third straight year.

“Every staff has a No. 1 and he fit the bill perfectly,” Lovullo said. “He won 17 games last year. He was our staff ace.”

Lovullo said he wasn’t ready to say who would start against the Rockies. The likely candidate is Robbie Ray, who went 15-5 with a 2.89 ERA last year.

The Indians released outfielder Melvin Upton Jr., who hit .189 in 18 spring games. The 33-year-old spent last year in the minors, seeing limited action for the Giants’ Triple-A team while slowed by injuries.

Matt Davidson, who homered, and Adam Engel each had three hits for Chicago and leadoff man Yoan Moncada got two hits and drove in three runs. Carson Fulmer pitched four hitless innings for the White Sox. Arizona relievers Neftali Feliz and Kris Medlen both got roughed up.

Tampa Bay starter Blake Snell struck out nine and only allowed one run in 4 2/3 innings. The Rays scored all their runs on a pair of ninth-inning homers. David Hale pitched three innings of one-hit ball for the Yankees and Aaron Judge had a double in four plate appearances.

Justin Upton opened the scoring with his 11th RBI and Albert Pujols was one of five Angles with a run-scoring single during a seven-run fifth inning. Mike Trout went 2 for 3 and Pujols was perfect in three place appearances. Seattle first baseman Daniel Vogelbach hit his fifth home run of the spring.

Jon Lester exited after 6 2/3 innings with six strikeouts and a second-inning RBI single for the Cubs. Addison Russell added a two-RBI single and Albert Almora Jr. drove home a run. Cincinnati designated hitter Scooter Gennett was 3 for 3 with a double and run scored.