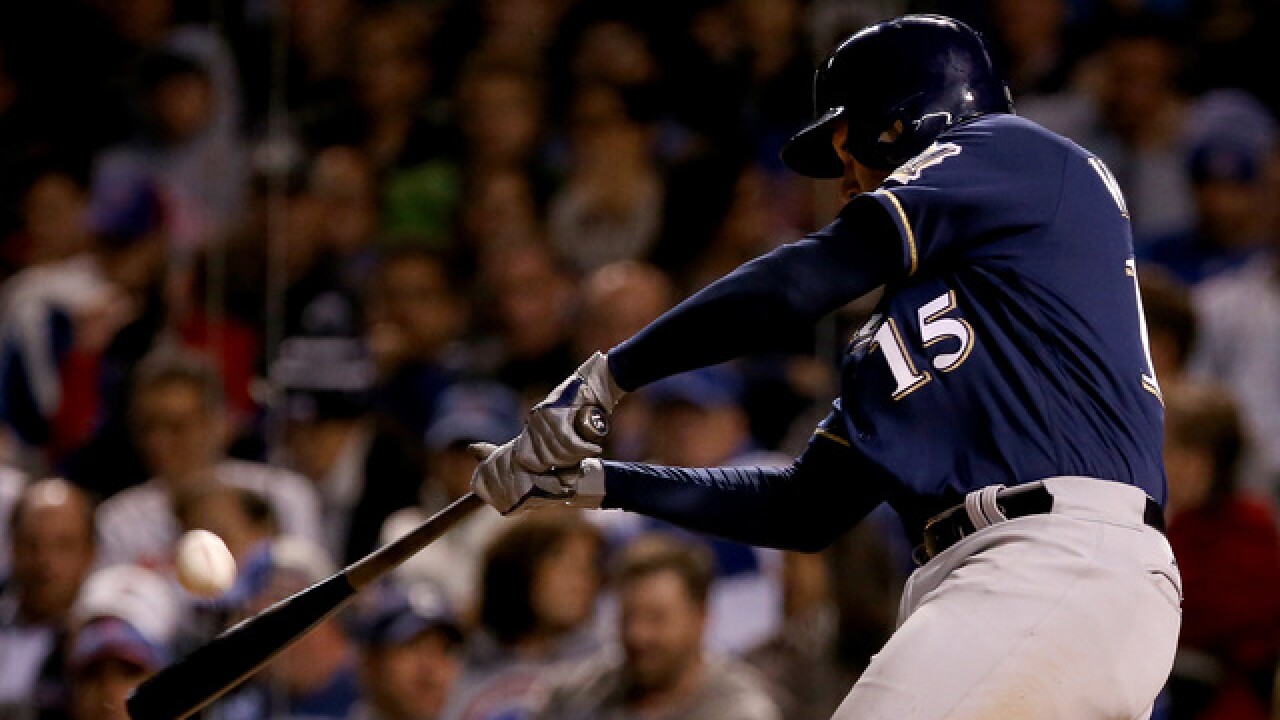 Copyright 2018 Scripps Media, Inc. All rights reserved. This material may not be published, broadcast, rewritten, or redistributed.
Dylan Buell
<p>CHICAGO, IL - SEPTEMBER 08: Neil Walker #15 of the Milwaukee Brewers flies out in the eighth inning against the Chicago Cubs at Wrigley Field on September 8, 2017 in Chicago, Illinois. (Photo by Dylan Buell/Getty Images)</p>

Neil Walker became the latest free agent to take a big pay cut as opening day approaches, joining the New York Yankees on Monday with a one-year deal for $4 million.

The veteran infielder made $17.2 million last season while playing for the New York Mets and Milwaukee Brewers. He can earn $1 million in performance bonuses this year.

The 32-year-old Walker hit .265 with 14 home runs and 49 RBIs last season, then became a free agent. He will likely start at second base, giving prospects Gleyber Torres and Miguel Andujar more time to mature in the minor leagues.

“It’s certainly a crazy offseason, but more than anything my hope was that I’d land somewhere that’s going to be competitive and have a chance to win,” Walker said. “I’m happy to be here, happy to be on a contending team.”

Starting pitcher Lance Lynn got right to work with Minnesota after finalizing his $12 million, one-year deal. He turned down a $17.4 million offer to stay with St. Louis, and looked for a richer contract in free agency.

Lynn limbered up with the Twins on a practice field, and was set to start Tuesday against Baltimore.

Right-handed starter Alex Cobb and reliever Greg Holland are among the free agents still available. All 30 teams open on March 29.

Baltimore starter Dylan Bundy gave up one run and struck out five in five innings. Jonathan Schoop hit his third home run of the spring. Starling Marte doubled for Pittsburgh and is batting .478.

Edwin Jackson got his third start for the Nationals and gave up three hits in three innings. Detroit designated hitter Victor Martinez had two hits, including a double.

Clayton Kershaw struck out seven over 3 2/3 innings, and Justin Turner and Chase Utley each had two hits for Los Angeles. Ji-Man Choi hit a grand slam for Milwaukee, and Christian Bethancourt homered in the ninth.

Cleveland starter Trevor Bauer struck out eight in five innings and Bradley Zimmer homered. Texas starter Clayton Blackburn got just one out while giving up three runs and four hits.

Colorado used only two pitchers to get through nine innings. Chad Bettis worked the first five, allowing two runs and striking out four. Antonio Senzatela finished with one-hit relief. Kris Medlen gave up a hit over two innings in the start for Arizona.

San Francisco catcher Nick Hundley doubled and drove in three runs. Steven Duggar, a sixth-round draft pick in 2015 from Clemson, homered for the fourth time this spring and raised his batting average to .300. A’s starter Jharel Cotton did not give up a hit over four innings, walking three and striking out five. Stephen Piscotty hit his second homer for Oakland.

Delino DeShields was 2 for 4 with an RBI and two runs, and Adrian Beltre had his first RBI of the spring on a sacrifice fly for Texas. Rangers starter Jesse Chavez pitched three perfect innings in his fourth appearance.

Chicago leadoff man Adam Engel hit a home run on the first pitch of the game and added another in the ninth inning for his fourth of the spring. Seattle’s Jean Segura smashed a line drive into the right-field corner for a triple, scoring Ichiro Suzuki after a leadoff walk. Nelson Cruz missed his third consecutive game for the Mariners.