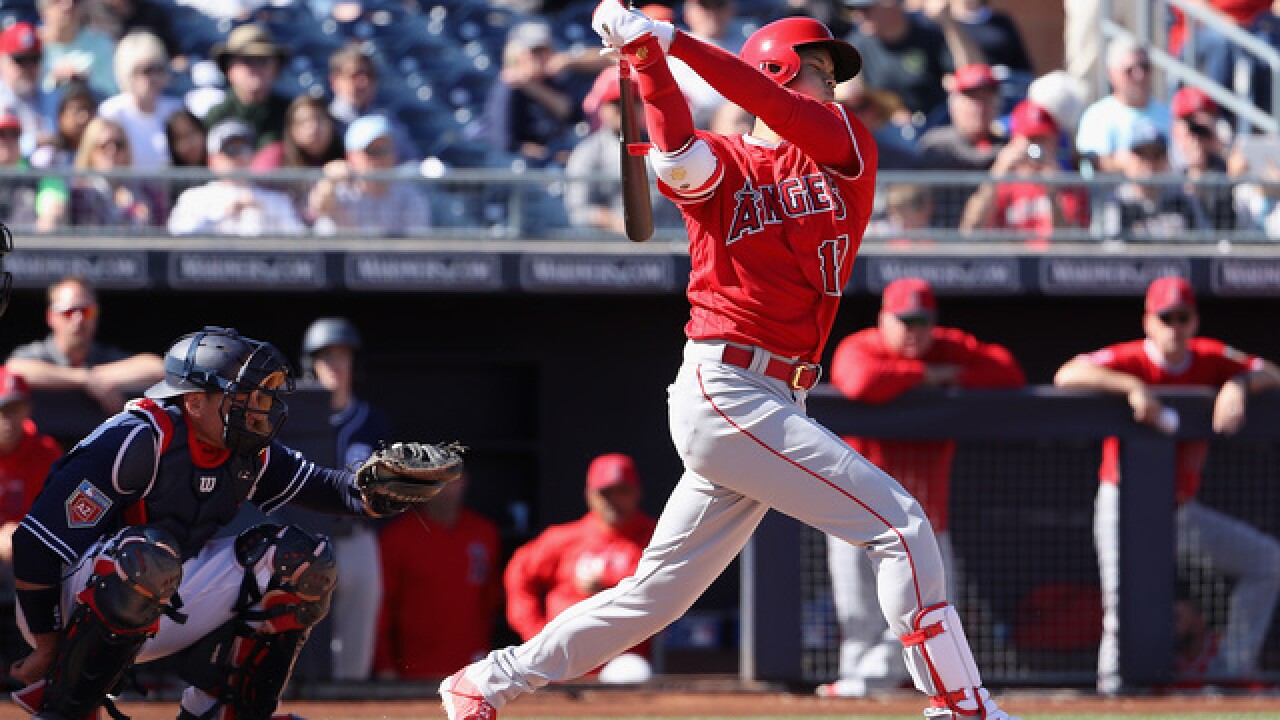 Copyright 2018 Scripps Media, Inc. All rights reserved. This material may not be published, broadcast, rewritten, or redistributed.
Christian Petersen
<p>PEORIA, AZ - FEBRUARY 26: Shohei Ohtani #17 of the Los Angeles Angels bats against the San Diego Padres during the third inning of the spring training game at Peoria Stadium on February 26, 2018 in Peoria, Arizona. (Photo by Christian Petersen/Getty Images)</p>

This was not how Felix Hernandez hoped to start spring training.

Slowed by injuries last year, the Seattle ace was struck in his pitching arm by a line drive Monday and forced to leave his exhibition debut.

The Mariners said a precautionary X-ray of his right forearm was negative. Hernandez was listed as day-to-day and will be re-evaluated Tuesday.

Hernandez was hit by a liner from Victor Caratini of the Chicago Cubs. The 2010 AL Cy Young Award winner immediately grabbed his arm and didn’t chase the ball on the infield grass.

Hernandez went down to a knee, hopped up and walked around in obvious pain. He headed to the dugout with a trainer holding his arm, and Caratini gave him a tap of encouragement.

The 31-year-old Hernandez spent considerable time on the disabled list last season because of shoulder trouble. He was 6-5 with a 4.36 ERA in 16 starts.

Two-way star Shohei Ohtani had a much better big league debut as a hitter than he did as a pitcher.

After patiently drawing walks in his first two plate appearances, Ohtani hit a sharp RBI single up the middle in his first spring training start as a designated hitter for the Los Angeles Angels.

“I was happy to get that first hit out of the way but I was also happy with my first two at-bats,” the 23-year-old said through a translator after getting on base three times against three different San Diego pitchers.

His first Cactus League at-bats came two days after his first start on the mound. The Japanese newcomer allowed a home run and didn’t make it through his scheduled two innings against Milwaukee.

AROUND THE GRAPEFRUIT AND CACTUS LEAGUES:

Noah Syndergaard and Justin Verlander provided the first real pitchers’ duel of the spring. Syndergaard threw 11 pitches of at least 100 mph over two perfect innings, striking out two. Syndergaard, who missed five months of the 2017 season with a strained lat, matched his longest outing in a big league game since April 20, 2017.

Verlander struck out four of the six batters he faced. Hector Rondon gave up four runs on four hits in just two-thirds of an inning. Houston prospects Kyle Tucker and J.D. Davis each hit their second home runs of the spring.

Julio Teheran threw two scoreless innings for Atlanta. Rex Brothers got the save but gave up a home run to Moises Sierra in the ninth.

Baltimore starter Kevin Gausman was tagged for five runs and six hits in 1 1/3 innings. Jonathan Schoop and Trey Mancini homered for the Orioles.

Michael Fulmer gave up one hit in two innings for Detroit.

Kyle Farmer had three hits and three RBIs for Los Angeles. Mike Minor, who signed a $28 million, three-year deal with Texas, threw only 17 of 36 pitches for strikes.

Arizona slugger Paul Goldschmidt hit his first home run of the spring. Colorado pitchers Kyle Freeland and Harrison Musgrave both got roughed up.

Robbie Ray worked two scoreless innings in the start, fanning three for Arizona. Catcher Alex Avila homered and flipped over a dugout railing for a catch. Cincinnati starter Robert Stephenson couldn’t make it out of the second inning, giving up two homers.