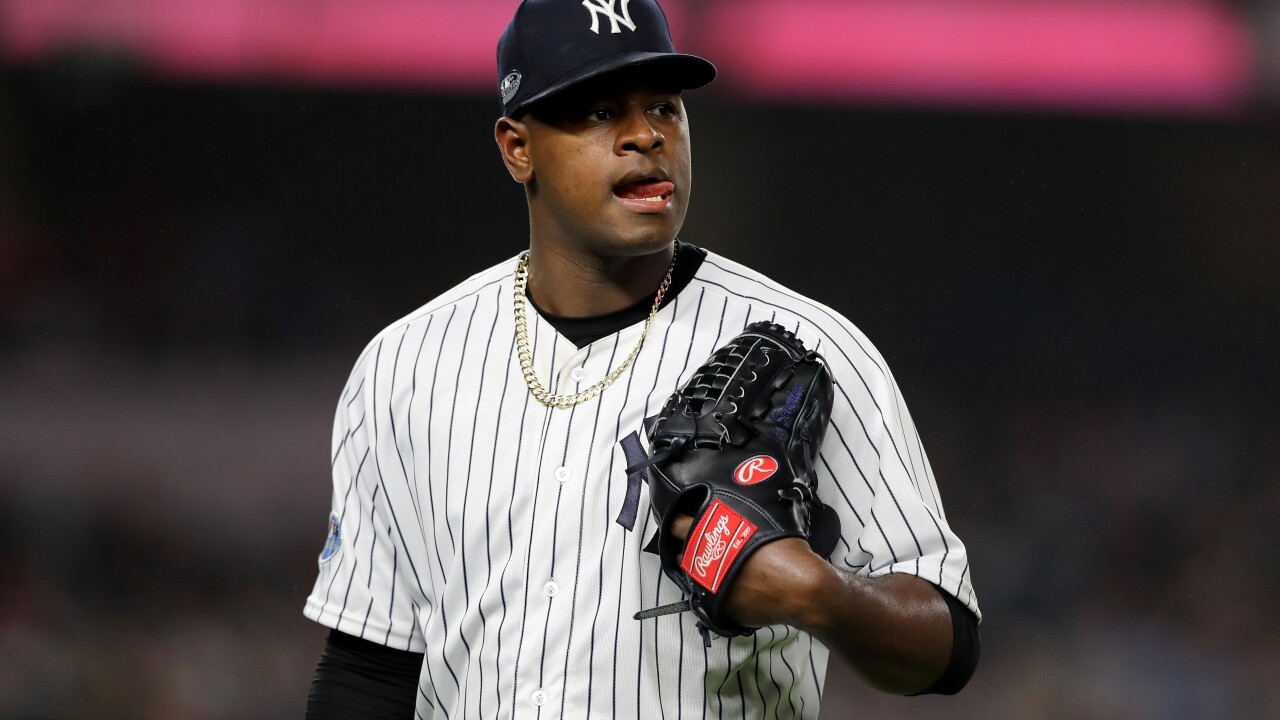 Elsa/Getty Images
NEW YORK, NEW YORK - OCTOBER 08: Luis Severino #40 of the New York Yankees walks back to the dugout after being pulled against the Boston Red Sox during the fourth inning in Game Three of the American League Division Series at Yankee Stadium on October 08, 2018 in the Bronx borough of New York City. (Photo by Elsa/Getty Images)

Padres outfielder Travis Jankowski will miss the first couple months of the season after breaking a bone in his right wrist while diving to catch a fly ball against Texas.

Padres manager Andy Green said an MRI revealed the fracture and Jankowski will have surgery this week. Jankowski was poised to be a fourth outfielder and defensive replacement.

Jankowski missed almost all of 2017 with a broken bone in his right foot. He hit .259 in 117 games last season, but his biggest value came with his defense and speed. He stole 24 bases in 31 chances.

In other news from spring training:

— Royals catcher Salvador Perez will undergo Tommy John surgery to repair a torn ligament in his right elbow, keeping the six-time All-Star off the field for the entire 2019 season. The decision was made after Perez received a second opinion Tuesday from the Los Angeles Dodgers' team physician. Perez hurt the elbow during a workout last week.

— New York Yankees right-hander Luis Severino has been scratched from his first scheduled spring training start due to right shoulder discomfort. Severino was slated to face the Atlanta Braves on Tuesday but was replaced by Stephan Tarpley. New York manager Aaron Boone has said that Severino was expected to the opening-day starter against the Baltimore Orioles on March. 28.

— Pitcher Clay Buchholz and the Toronto Blue Jays have finalized a $3 million, one-year contract. The 34-year-old right-hander is expected to join a starting rotation that includes Marcus Stroman and Aaron Sanchez. A two-time All-Star, Buchholz is 84-64 with a 4.78 ERA in 12 big league seasons for Boston (2007-16), Philadelphia (2017) and the Diamondbacks. He pitched a no-hitter against Baltimore in his second major league start.

— The Detroit Tigers have assigned top draft pick Casey Mize to minor league camp. Mize, the No. 1 selection in last year's draft, pitched two innings Monday for the Tigers against St. Louis. He struck out the first two batters of a 1-2-3 seventh, then allowed a run in the eighth after walking two.

— Minnesota Twins third baseman Miguel Sano will likely miss the first month of the season, following another procedure to repair a severe cut above the heel on his right foot. Sano saw a plastic surgeon to undergo an operation to remove damaged tissue or foreign objects from a wound. Sano suffered the gash in late January during the celebration of his team's winter league championship in the Dominican Republic.