Ace in the making, Aaron Nola has the right stuff 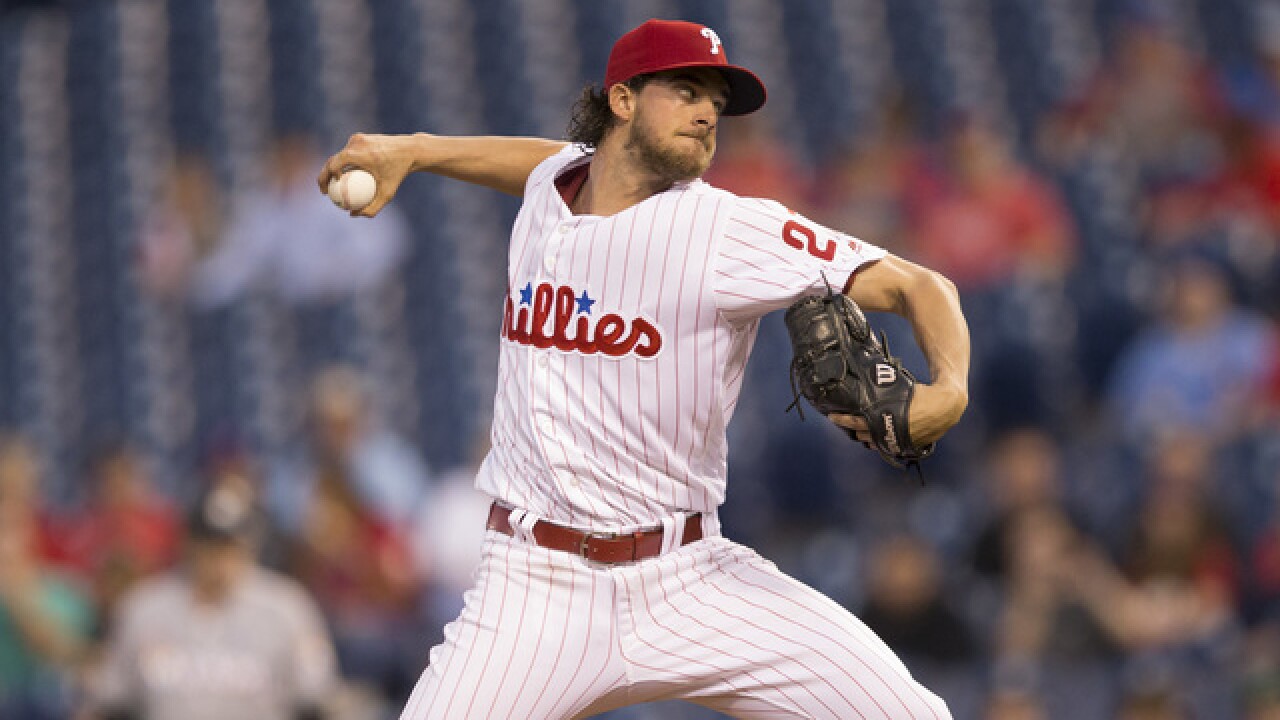 Copyright 2018 Scripps Media, Inc. All rights reserved. This material may not be published, broadcast, rewritten, or redistributed.
Mitchell Leff
<p>PHILADELPHIA, PA - SEPTEMBER 13: Aaron Nola #27 of the Philadelphia Phillies throws a pitch in the top of the first inning against the Miami Marlins at Citizens Bank Park on September 13, 2017 in Philadelphia, Pennsylvania. (Photo by Mitchell Leff/Getty Images)</p>

CLEARWATER, Fla. (AP) — Aaron Nola has the all the right stuff to be a longtime ace for the Philadelphia Phillies.

The 24-year-old righty has a sharp, biting curve, a deceptive fastball and pinpoint control. New manager Gabe Kapler raves about Nola’s “presence” on the mound and already mentioned him with Clayton Kershaw and Max Scherzer when he announced he’ll start opening day.

“He knows himself so well,” Kapler said. “He knows he’s a command guy. He’s going to command all four quadrants of the strike zone with three pitches. There’s very few guys who can spot up with the fastball, curve and changeup. The way he changes speeds is really spectacular and his presence on the mound really stands out from a lot of the guys in baseball. It’s exciting to have him on our side.”

Nola dominated the Red Sox on Wednesday, tossing four innings of one-hit ball with five strikeouts. He faced a split-squad lineup filled with many minor league players and worked on improving his changeup.

“He was pretty special,” Kapler said. “What stood out most is how he adds and subtracts to his fastball. You see some 88 mph (fastballs) up there and then he’ll reach back for 94. It’s very reminiscent of some of the best pitchers in baseball.”

The setback was frustrating but Nola handled it well.

“Pitching a bad game, two bad games in a row, whatever, it’s not going to define your season,” he said. “When I had a bad game, I stuck with my plan. I don’t throw those games away, I know who I am, I know what I can do and what I can’t do and I try to learn from mistakes.”

During a stretch from June 22 to Aug. 12, Nola became the first pitcher in franchise history to throw at least six innings and allow two runs or fewer in 10 straight starts.

He arrived to camp in excellent shape and is determined to help the Phillies be a surprise contender after five straight losing seasons.

“I trained a little harder, stuck to my routine, stayed disciplined and feel really good,” Nola said. “I’m just trying to do my part and I think everyone has the same mindset. If each one of us takes a step up in our game, we’re going to be better. We think we’re going to compete. We want play all the way to the end. A lot of people think we’re still rebuilding, but we’re past the rebuilding.”