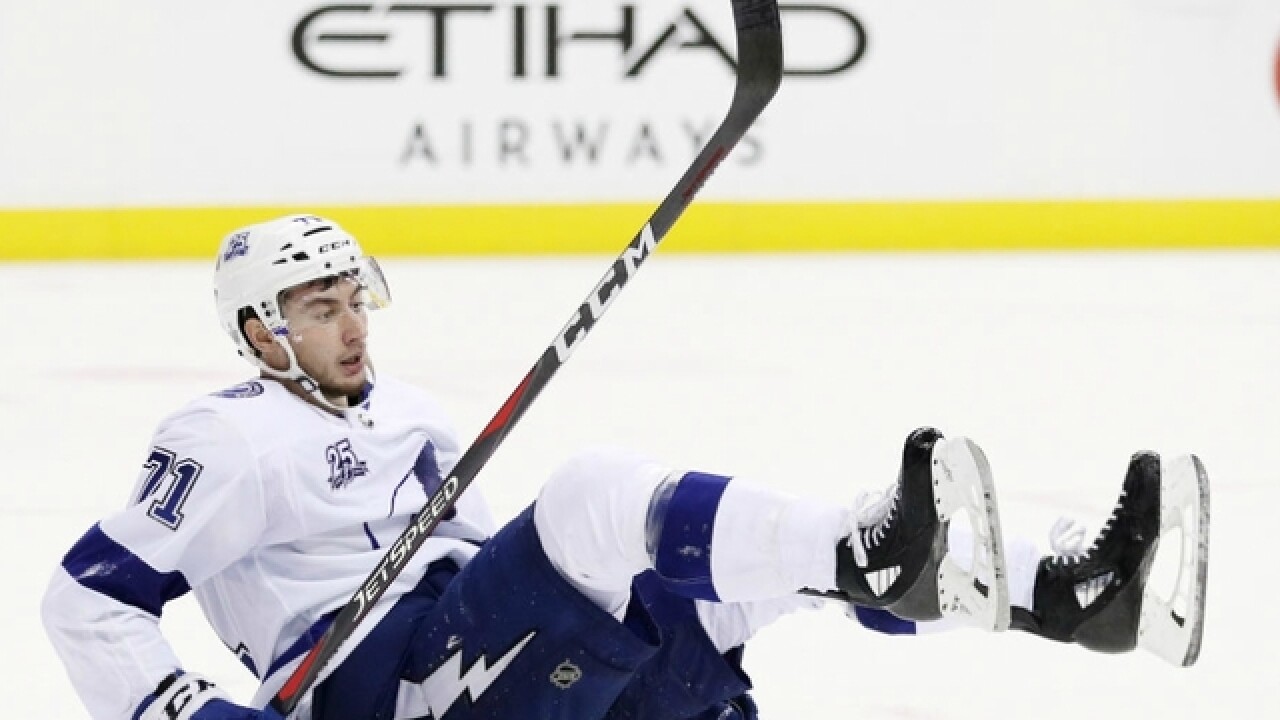 Image copyright 2018 Getty Images. All rights reserved. This material may not be published, broadcast, rewritten, or redistributed.
Patrick Smith/Getty Images
<p>WASHINGTON, DC: Anthony Cirelli of the Tampa Bay Lightning falls to the ice in the third period against the Washington Capitals in Game Six of the Eastern Conference Finals during the 2018 NHL Stanley Cup Playoffs at Capital One Arena on May 21, 2018 in Washington, DC.</p> 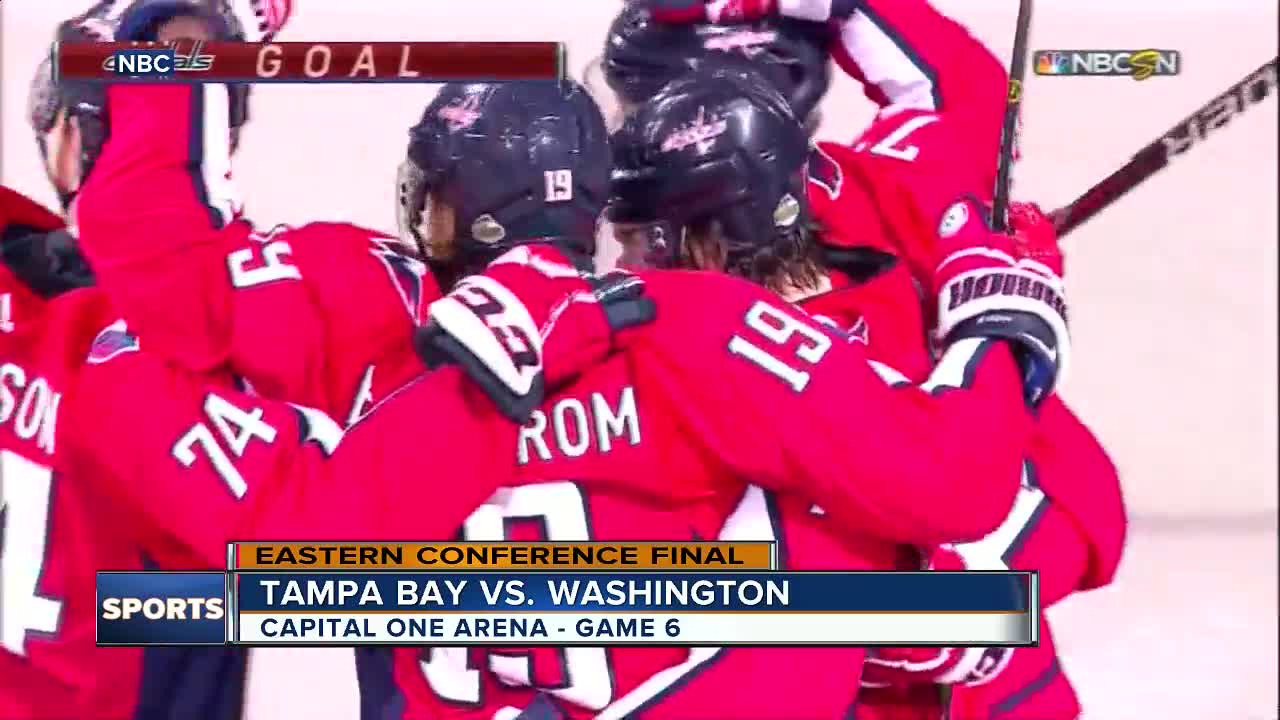 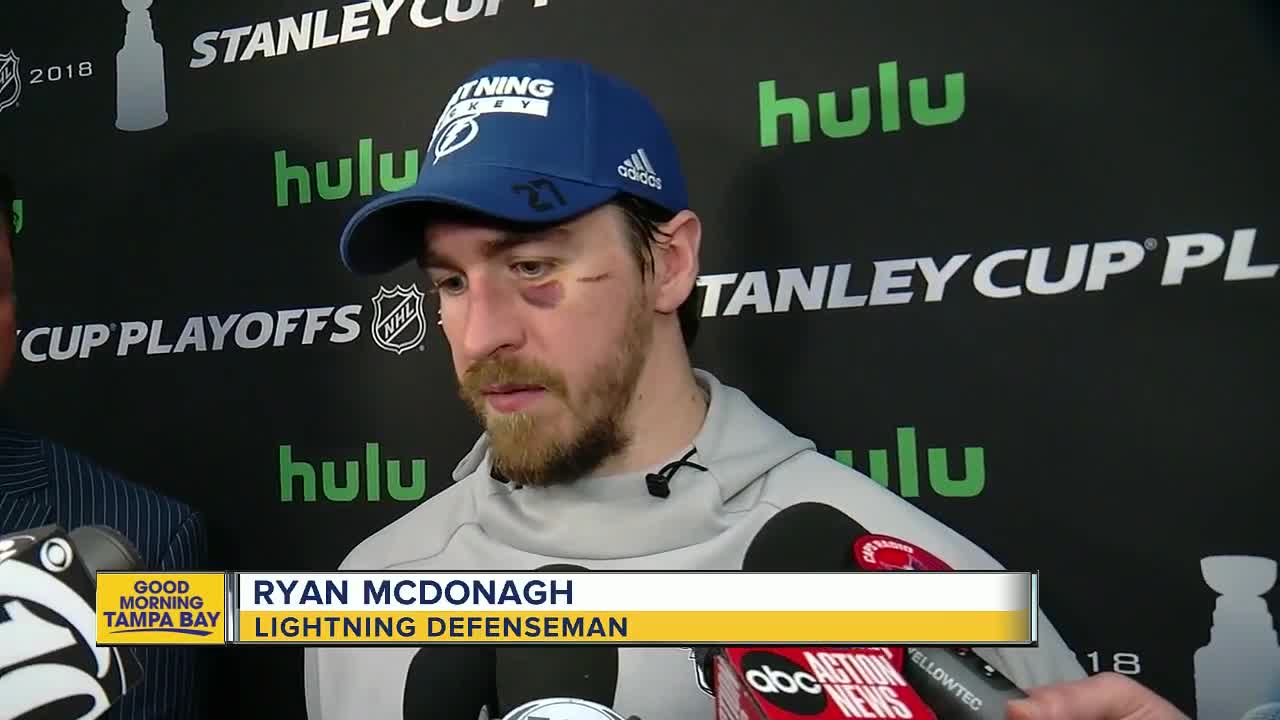 WASHINGTON (AP) -- Facing elimination at home, the Washington Capitals looked determined to hit everything that moved in Game 6 of the Eastern Conference final.

The goal was to finish checks on Tampa Bay Lightning players as much as possible, though at one point Devante Smith-Pelly decked Dan Girardi and took teammate Jay Beagle down with him.

"I apologized to him," Smith-Pelly said. "I said sorry. He didn't seem to care."

The Capitals made no apologies for taking the body and grinding out a physical 3-0 victory Monday night that tied the playoff series and set up a deciding Game 7. T.J. Oshie had a goal on the power play and into an empty net, Smith-Pelly scored a back-breaker and Braden Holtby stopped all 24 shots, but it was the bruising style that kept the Capitals alive and could still pay more dividends.

"You've got to wear them down," Smith-Pelly said. "Every game, if guys are going to be playing 25, 30 minutes, it's tough when you're getting hit every single shift. We've been on the body all game and all series. If it shows up in Game 7 where guys are starting to get tired, then it was all worth it."

Game 7 is Wednesday night at Tampa Bay. The winner faces the Vegas Golden Knights, who are in the Stanley Cup Final in their first season.

Alex Ovechkin, Tom Wilson and Brooks Orpik led the charge in the grueling Game 6, throwing their bodies around all night like human wrecking balls. Orpik separated Cedric Paquette from the puck twice on one shift, Ovechkin leveled rookie Yanni Gourde and Wilson was his usual self, dishing out a handful of crushing body checks.

The Capitals outhit the Lightning 39-19 and outshot them 34-24, bruising and battering them all over the ice.

"It's desperation, really," Orpik said. "You try to empty the tank as much as you can. That's probably one area where we have an edge is the size and physical play."

That edge was noticeable in Game 6 when Washington fired up an already-raucous crowd well before Oshie's power-play goal 15:12 into the second period. While Tampa Bay goaltender Andrei Vasilevskiy was again on top of his game in stopping 31 of 33 shots, Orpik said the Capitals wanted to give back to fans for their energy and did so by laying out Lightning players.

From Wilson's big hit on Paquette on his first shift through the time Smith-Pelly scored with 9:58 left, the physical play took a toll on the Lightning, who didn't have the energy left to muster a late comeback. Tampa Bay captain Steven Stamkos said simply the Capitals "executed their game plan" and the Lightning didn't respond.

"They played with that desperate hockey and we should have matched it and we didn't," winger Ryan Callahan said. "They played like their lives were on the line, and we played like we had another chance and that's unfortunate, but we've got to change the script now in Game 7."

Tampa Bay had no answer for the physicality with a hit disparity coach Jon Cooper chalked up as, "Somebody was engaged and somebody wasn't." The Lightning also couldn't solve Holtby, who was at his best on a handful of deflection attempts to record his first shutout of these playoffs.

"I was just trying to stay in the moment, focus on one puck at a time," Holtby said. "I try and stay the same level through the game."

The Lightning missed a chance to close out an opponent for the first time in these playoffs. They eliminated New Jersey and Boston in five games apiece but are now on the brink themselves.

The Capitals improved to 10-2 in the Ovechkin/Nicklas Backstrom era when facing elimination any time before Game 7. They're 3-7 in Game 7 over that time but will obviously take their chances after grinding their way back to 3-3 in the series.

"I think it's great that we're close," Oshie said. "I think both teams for the most part figured out what works against the other team. It's just a matter of who's going to play longer, harder and do more of it."

NOTES: Washington improved to 4-5 at home in the playoffs. The Lightning dropped to 5-2 on the road. ... An assist on Oshie's first goal extended Capitals C Evgeny Kuznetsov's point streak to nine games, tied with Backstrom in 2009 for the longest in franchise playoff history. ... F Andre Burakovsky returned to the Capitals lineup after being a healthy scratch for Game 5, replacing Alex Chiasson.