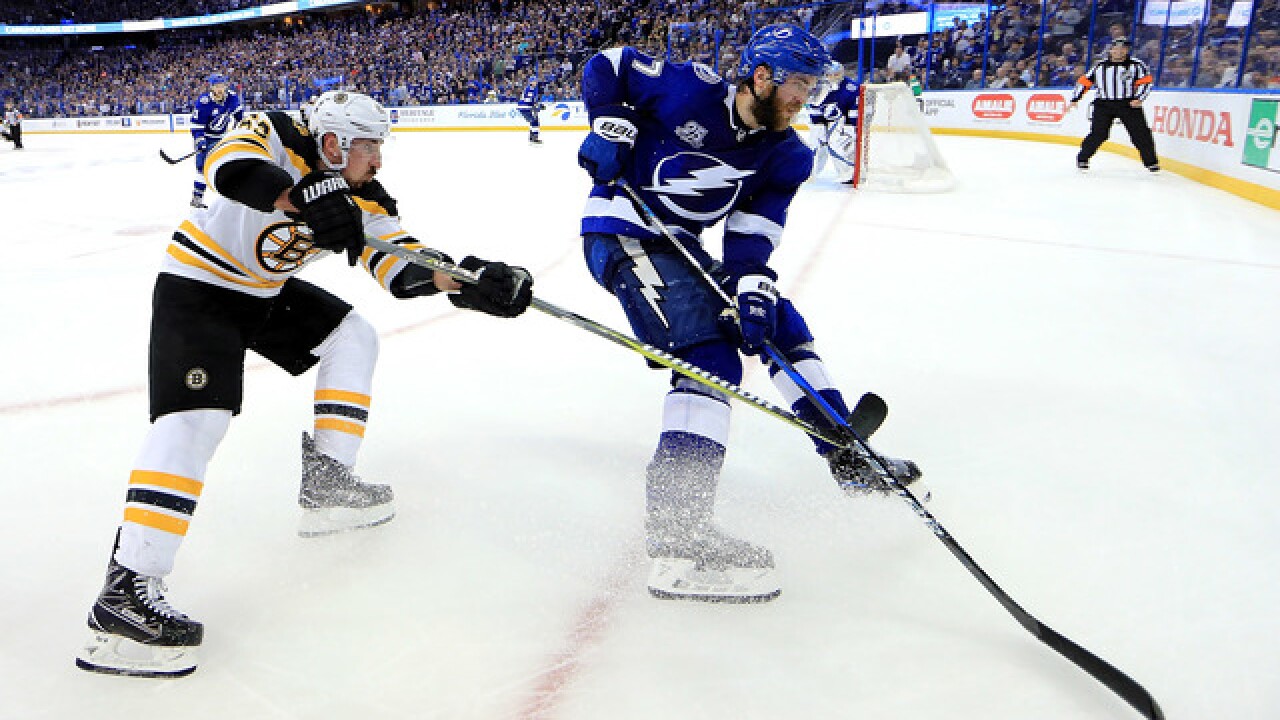 Copyright 2018 Scripps Media, Inc. All rights reserved. This material may not be published, broadcast, rewritten, or redistributed.
Mike Ehrmann
TAMPA, FL - MAY 06: Brad Marchand #63 of the Boston Bruins and Victor Hedman #77 of the Tampa Bay Lightning fight for the puck during Game Five of the Eastern Conference Second Round during the 2018 NHL Stanley Cup Playoffs at Amalie Arena on May 6, 2018 in Tampa, Florida. (Photo by Mike Ehrmann/Getty Images) 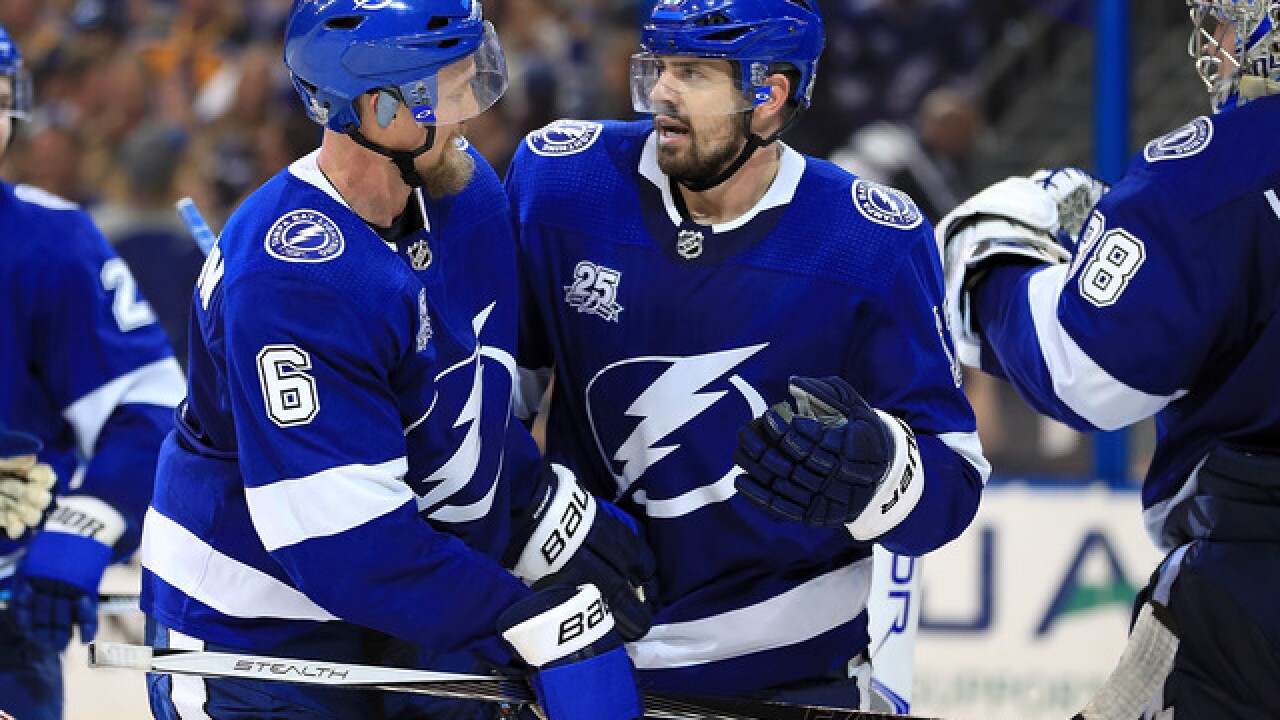 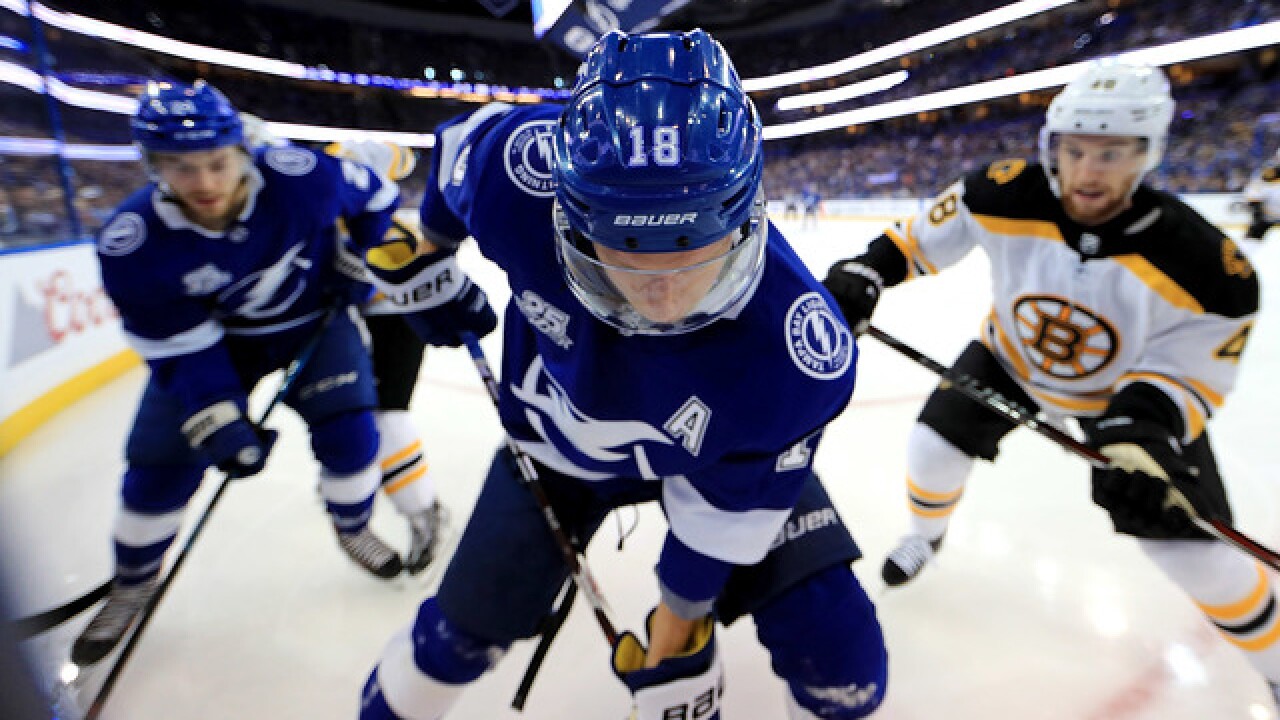 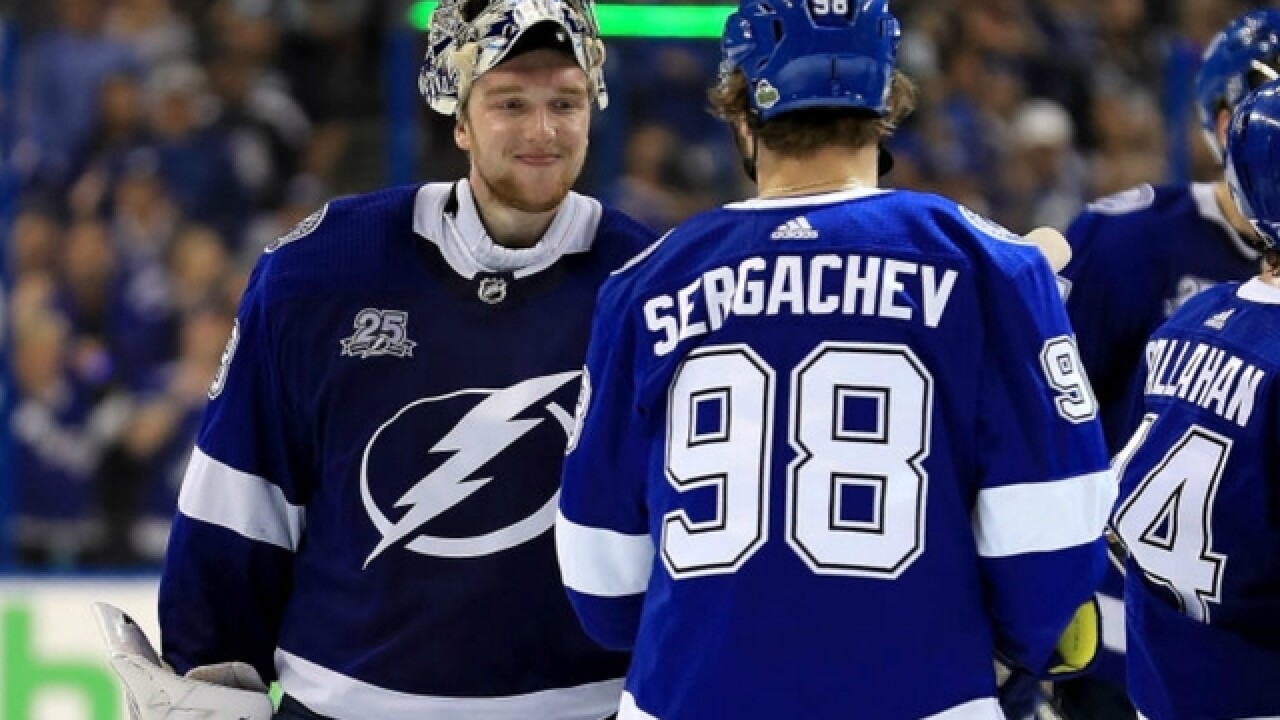 TAMPA, Fla. (AP) — The Tampa Bay Lightning, with a primary assist from a team that handled them during the regular season, are back in the Eastern Conference final for the third time in four years.

"I guess I can say it now. Boston set the bar for us, and we played them three times late in the year," Lightning coach Jon Cooper said after his team's 3-1 victory over the Bruins ended their second-round playoff series in five games.

PHOTOS | Check out these action shots from Game 5

"The first two times we played them, they literally manhandled us.  ... and we knew if we were going to go anywhere when we made the playoffs, or if we made the playoffs, that we had to be as good as Boston," Cooper added. "We beat them 4-0 (in the last meeting). I think that gave us a little hit of confidence. I guess a lot of confidence. ... and, ultimately we carried that through into this playoff round."

Brayden Point and J.T. Miller scored second-period goals and Anton Stralman added an empty-netter with 1:29 remaining to end any chance for a Boston comeback.

Andrei Vasilevskiy stopped 27 shots -- 14 in the final period -- for the Lightning, who rebounded from losing the series opener at home to eliminate the Bruins in five games.

Boston won three of the four games between the teams during the regular season, finishing one point behind Tampa Bay for the Atlantic Division title and the No. 1 seed in the East.

The Bruins outlasted Toronto in seven games in the opening round of the playoffs. They scored six goals to beat the Lightning in Game 1, but had difficulty scoring after that.

Over the last three games, Boston failed to score an even-strength goal.

"You've got to give them credit. We're a team that scored all year long with different players in and out of the lineup," Bruins coach Bruce Cassidy said.

"We scored against Toronto, so it's not like after 89 games we forgot how to score or not play the right way," Cassidy added. "I think their D corps is big and they move the puck. They did a good job of not allowing us to get inside."

David Krejci scored on the power play in the final minute of the first period to give Boston a 1-0 lead that Point erased with his unassisted goal at 10:43 of the second.

"They're a really good team. They have been all year," Bruins winger Brad Marchand said. "They compete extremely hard, they have a lot of speed. They were better than we were in a lot of areas, one of them being puck battles and their pursuit. It showed up in the end."

One day after being put "on notice" by the NHL for licking Lightning forward Ryan Callahan during Friday night's overtime loss in Game 4, there were no more such incidents involving Marchand, who also made headlines after appearing to lick Toronto's Leo Komarov in the first round.

Marchand was given an edict Saturday to stop licking opponents or subject himself to a possible fine or suspension for future incidents.

Cassidy said before the game that he had spoken with Marchand, delivering a simple, straight-forward message: "We need you on the ice, we need you playing. If part of his M.O. is to annoy people, find a different way to annoy them. Preferably by scoring some goals, that would be the best way."

Afterward, Marchand shrugged off a question about his discussion the previous day with NHL senior vice president of hockey operations Colin Campbell.

The Lightning once again did a good job of containing Boston's top line of Patrice Bergeron, David Pastrnak and Marchand. Although the trio combined for 23 points in the series (seven goals, 16 assists), about half that production (11 points) came in the Bruins' 6-2 win in Game 1.

Bergeron and Charlie McAvoy assisted on Krejci's goal, but Vasilevskiy came up big against the high-scoring line with four huge saves -- one on Bergeron's point-blank shot -- in the closing minutes while Tampa Bay was killing off Boston's last power-play opportunity.

The Bruins scored five goals over the final three games of the series, four of them on the power play and one short-handed.

"You can't rely on special teams every night to win games," Marchand said. "They help for sure, but you have to be able to produce 5-on-5."

NOTES: Bruins RW David Backes left the ice after taking a hard hit from Miller with just under eight minutes remaining in the second period. He did not return. ... The Lightning improved to 5-1 in Game 5s when holding a 3-1 series lead. ... Boston played without D Torey Krug, who injured his left ankle during Game 4. Nick Holden took over Krug's spot, making his first appearance since Game 3 of Boston's opening-round series against Toronto.