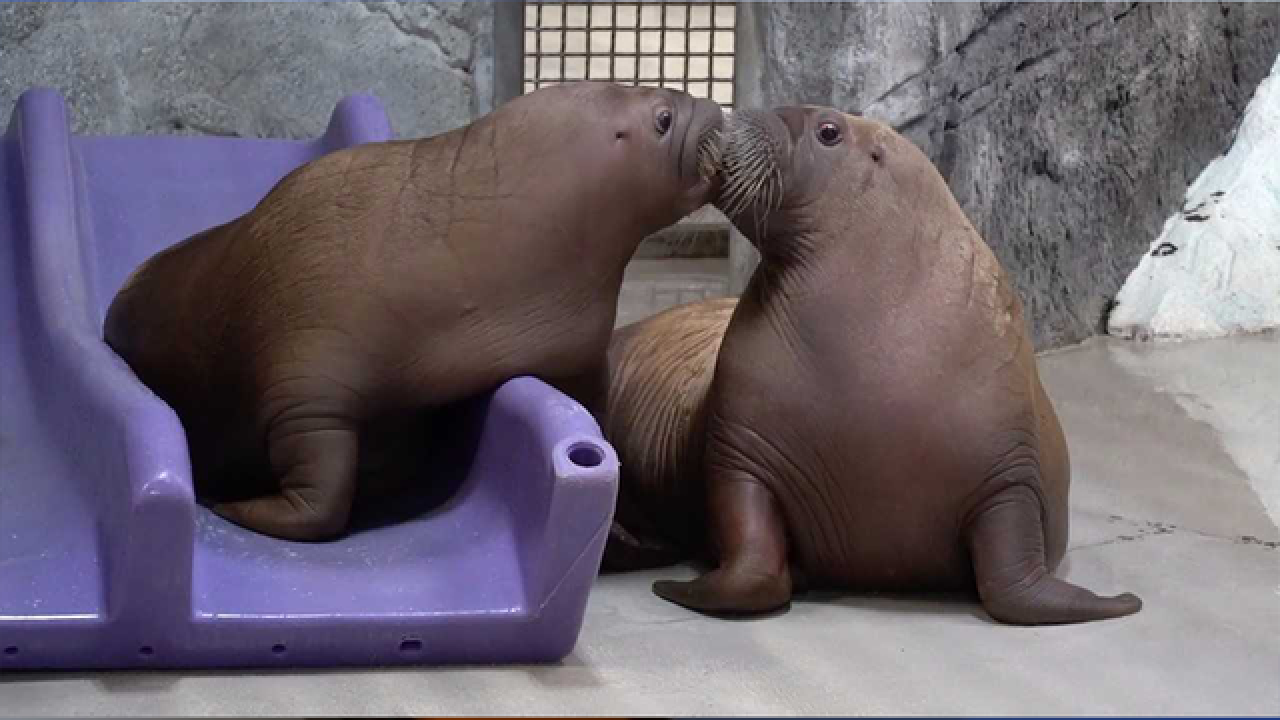 Copyright 2017 Scripps Media, Inc. All rights reserved. This material may not be published, broadcast, rewritten, or redistributed.
SeaWorld Orlando

ORLANDO, Fla. -- Late last week, two baby walruses met for the first time, and the moment was more than anyone expected.

The SeaWorld Orlando Animal Care Team introduced Aku, a rescued walrus calf from Alaska, and Ginger, a walrus calf born at the park.  As the team watched on, the two began inspecting one another curiously. After their first bottle feeding together, Aku and Ginger were soon following each other around the habitat and playing.

Ginger was born at SeaWorld Orlando on June 3 to Kaboodle, a 14-year-old female walrus, and is the first walrus calf to be born at the park. A few weeks after her birth, the SeaWorld Orlando Animal Care and Veterinarian Teams determined that she was not gaining weight and intervened to ensure she received enough nutrition. Over the course of the last five months, the teams have provided Ginger with around-the-clock care, including bottle feedings, socialization and companionship.

Aku was rescued and rehabilitated by the Alaska Sea Life Center (ASLC) in June after being found abandoned on a gold mining dredge off the Alaska coast of Nome. He was estimated to be two weeks old at the time of his rescue, and due to his age, Aku was deemed non-releasable by U.S. Fish and Wildlife Service (USFWS). After his rehabilitation, the decision was made to send him to SeaWorld Orlando, in part, to be a companion for Ginger.

The introduction of the two walrus calves is an important milestone as their specialized care progresses at SeaWorld Orlando. The goal for Aku and Ginger is to create a social bond and develop companionship between the two animals for years to come.

The park’s walrus program plays an important role in educating the public about these amazing animals. While walruses are not yet listed as a threatened species, and populations have stabilized since 19th-century commercial hunting was outlawed, the species does face growing threats in the wild, including the significant loss of sea ice.

With the permission of the U.S. Fish and Wildlife Service, SeaWorld Orlando has raised 10 orphaned walrus calves over the last 50 years, including Ginger’s father, Garfield.  The SeaWorld Busch Gardens Conservation Fund has provided research assistance on the Pacific walrus and the impact of dwindling floating sea ice. Ginger and Aku will inspire park guests to learn more about these incredible animals and the plight of walruses in the wild. Guests who are visiting SeaWorld can spot Ginger and Aku on the Walrus cam inside the Wild Arctic habitat.

You can visit Aku and Ginger at SeaWorld Orlando.