PieCaken is the ultimate Thanksgiving dessert 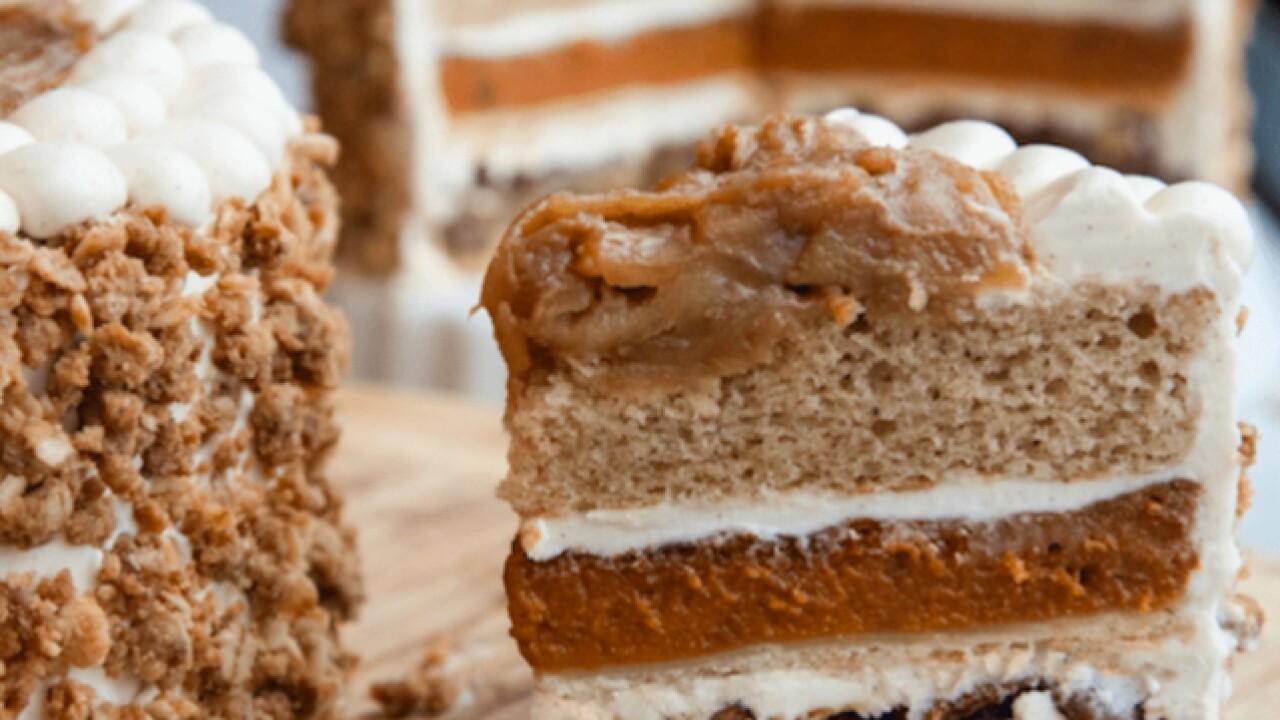 If you thought the Turducken was the most incredible layered dish you could eat on Thanksgiving, listen up. The PieCaken is the Turducken of desserts, and it will change your Thanksgiving feast for the better.

In case you’re unfamiliar with the mega-meat dish that is the Turducken, it consists of a turkey stuffed with a duck that’s then stuffed with a chicken. Each layer has stuffing in between.

The PieCaken is the same idea, only with dessert foods  instead of meats. First, there’s a layer of pecan pie. The next layer is pumpkin pie, and last, but certainly not least, is a layer of apple upside-down cake. This delectable dessert is made complete with cinnamon buttercream frosting, glazed apples and a crunchy oat topping.

Take a minute to let that sink in. Just thinking about a PieCaken is enough to push you into a sugar coma!

You have pastry chef Zac Young and his determination to one-up the Turducken to thank for this masterful creation.

While the TurDucken is a hard act to follow, culinarily-speaking, we’d have to say Young has certainly topped it. I mean, just look at this thing:

Not only does the PieCaken exist, but you can also order it online. It retails for $75, but we think it’s totally worth it for a Thanksgiving dinner split among many people.

You have your it shipped nationwide through Dec. 28 or pick it up in-store at David Burke in Bloomingdales, if you’re in the New York City area.

There are plenty of folks dying to give this dessert a try—for obvious reasons—and they’ve taken to social media to share just how badly they want to get their hands on this layered goodness:

One culinary genius even recreated the dessert from scratch. That’s commitment right there!

Um…I made a #piecaken It should actually be called #piecakin if you wanna get technical lol #ThanksgivingCanada ð¦ #yum pic.twitter.com/XoZJKR5WMb

In case you’re not willing to shell out $75 for this post-Thanksgiving treat, you can also put your baking skills to the test and try making one on your own.

There are plenty of YouTube tutorials to help show you how it’s done. You can make everything from scratch or use store-bought pies and a cake mix to bring this to life. Here’s PieCaken one tutorial from Brit + Co:

Once you’ve got that down, you can also experiment with the layers. This video has a unique take on the PieCaken, using brownie batter and cookie dough inside of the cake instead of pie:

As long as you’ve got a PieCaken in the mix, your Thanksgivings will never be the same!

Related stories
Copyright 2017 Scripps Media, Inc. All rights reserved. This material may not be published, broadcast, rewritten, or redistributed.