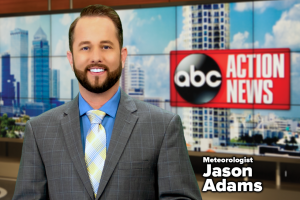 Jason is our Weekend Meteorologist here at ABC Action News. He is a graduate of Florida State University. While there, he earned his Bachelor of Science degree in Meteorology, along with a minor in Mathematics. Jason also holds the American Meteorological Society's Certified Broadcast Meteorologist seal... a top certification in the field of meteorology.

After college, Jason moved all over the country covering violent tornadoes, crippling blizzards and ice storms, and major Florida hurricanes. One week after arriving at ABC Action News, Hurricane Irma hit our area. Jason played an integral role in our digital and on-air coverage as the storm moved through. Growing up, he recalls being evacuated from Tyndall AFB in Panama City to MacDill AFB when threatened by hurricanes in the Panhandle. That’s how Tampa became a favorite spot of his and was one of the many reasons why he wanted to call Tampa Bay his permanent home.

When not tracking thunderstorms or hurricanes, Jason is most likely to be found on the beach. He is our resident beach bum, an ocean advocate, and has a passion for shark, sea turtle & manatee conservation. Look for him on Facebook, Twitter & Instagram.