It was the selfie seen 'round the world.

A 13-year-old from Massachusetts stole the show during Justin Timberlake's halftime performance at the Super Bowl LII Sunday night when he nabbed a quick selfie with the superstar mid-performance.

"I kind of just jumped in there -- it was crazy," Ryan, 13, who wished to be identified only by his first name, told ABC News. "I’m not going to get that opportunity again, and I just kind of went for it." 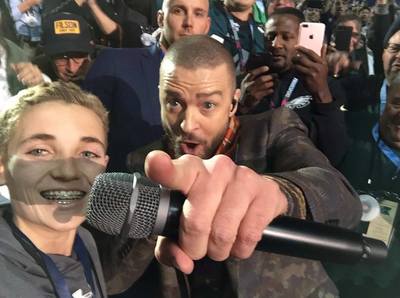 He admits he started out by experiencing some technical difficulties, saying, "at first I tried to get a selfie with him, and my phone died, and then it turned back on."

The New England Patriots fan from Scituate, Massachusetts, added that Timberlake "didn't really say anything" during their encounter.

"But I got a picture with him," Ryan said. "It was just so cool. I was speechless."

Since the incident, his phone has been blowing up with texts and calls.

"Everyone in my row was telling me I was all over Twitter and stuff and my phone exploded," he said. "I've probably gotten like 45-50 calls in like the last 20 minutes."

"I got to be on TV with Justin Timberlake, and it's crazy," the boy said. "It was just so cool. I was speechless."