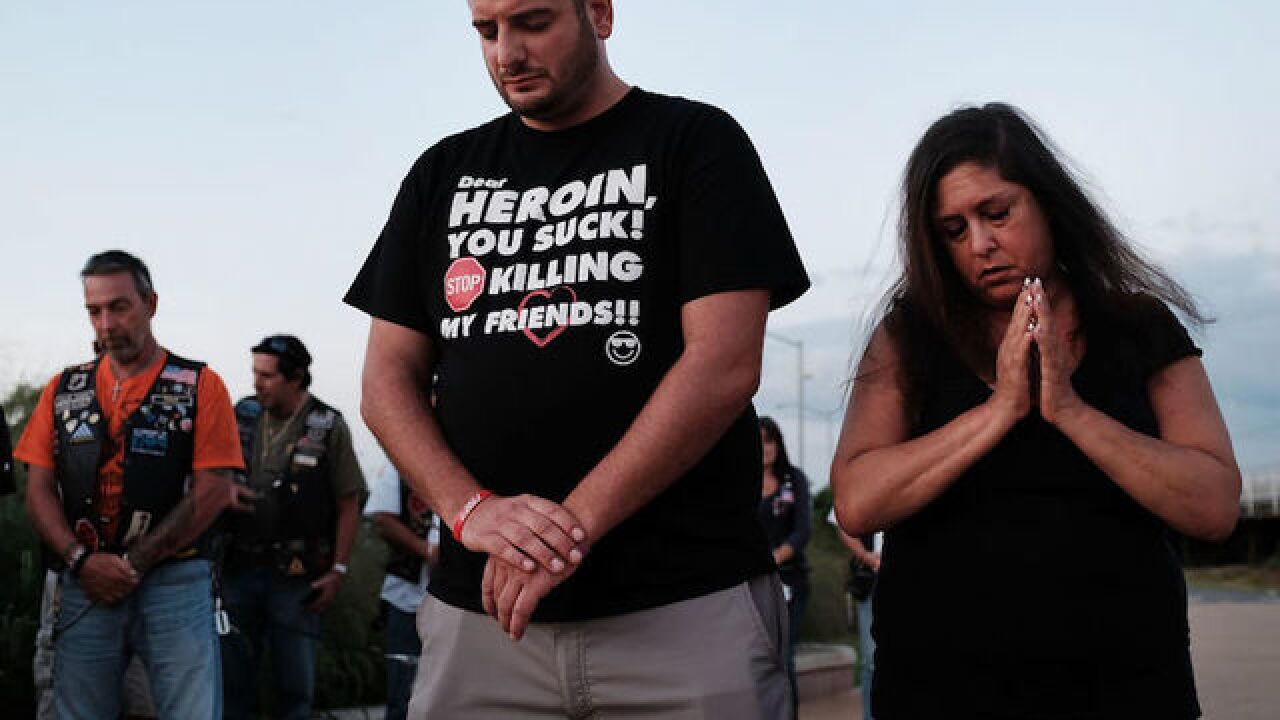 Copyright Getty Images
Spencer Platt
<p>People pause to pray during a candlelight vigil for victims of drug addiction on August 24, 2017 in the borough of Staten Island in New York City. Dozens of Staten Island residents attended the evening vigil which celebrated the lives and gave remembrance to those that have died from drug addiction.</p>

For the first time in more than half a century, Americans’ life expectancy declined for the second straight year, a change driven by drug overdose deaths among younger people, officials said.

A baby born in 2016 could expect to live 78.6 years, down from 78.7 in 2015, the National Center for Health Statistics said in its annual mortality report released last week.

The change occurred not because older people are dying younger, but because of drug overdose deaths among people aged 25 to 54. And it occurred despite an overall decline in mortality.

The death rate for all Americans decreased by 0.6 percent in 2016, but it increased among younger adults. Adults aged 25-34, 35-44 and 45–54 had the highest rates of drug overdose deaths among the 63,600 Americans who died of overdoses that year.

While the changes are slight, they are troubling to public-health officials, who note that America is the only developed nation to experience a decline in life expectancy in recent years. Moreover, it’s the first time since 1963 that life expectancy has decreased in two consecutive years.

“Even though 1/10th of a year of decline in life expectancy doesn’t seem like a lot, it actually represents a lot of lives cut short,” said Bob Anderson, chief of the Mortality Statistics Branch of the National Center for Health Statistics.

In another report issued Thursday, the center drilled down into drug overdose deaths between 1999 and 2016. Officials said there were 63,600 overdose deaths in 2016. That’s roughly the capacity of Brigham Young University’s LaVell Edwards Stadium in Provo, and it represents a 21 percent increase in drug deaths since 2015.

The age-adjusted rate of drug overdose deaths involving synthetic opioids other than methadone (drugs such as fentanyl, fentanyl analogs, and tramadol) doubled between 2015 and 2016, from 3.1 to 6.2 per 100,000, the report said.

The report also identified the areas with the highest rates of drug overdoses in 2016: West Virginia, Ohio, New Hampshire, the District of Columbia and Pennsylvania.

Overall, the 10 leading causes of deaths remained the same, although the death rates declined in seven categories and rose in three.

Good news was hard to find in the report, but one improvement came in the number of infant deaths.

In 2016, there were 23,161 deaths of children under the age of 1, 294 fewer than in 2015. The leading causes of death were the same; congenital malformation, low birth weight, sudden infant death syndrome, maternal complications and unintentional injuries lead the list.

While some people might be tempted to dismiss the decline in life expectancy as inconsequential because the change from 2015 to 2016 is so slight, Samuel Sturgeon, president of Demographic Intelligence, said even a small change can make a big difference in a country as big as the United States.

“It sounds like a small amount, but when you extend that across 300 million people, the hardship starts to add up pretty quickly. And it’s not like the average 78-year-old is dying one month earlier. What this represents is a sufficient number of young people are getting 30 or 40, if not 50, years cut out of their lives," Sturgeon said.

A change in mortality among young adults also affects the country in other ways, from the psychological toll on parents who have lost an adult child to a reduction in the number of workers helping to provide services for seniors through those workers' taxes, he said.

An increase in drug deaths among people of child-bearing age can affect the country's birth rate, which is already approaching historic lows.

“Demographically, we should be in the middle of a mini baby boomlet, just given the age of the population and the size of the millennials, but we’re not. I know this isn’t (because of) death, but to me, they’re related," Sturgeon said.

"We’re about to hit record low fertility for America most likely when the final 2017 data comes out. So whatever it is that is causing more drug use and suicide seems to be having a dampening effect on births as well."

Anderson, of the National Center for Health Statistics, said drug overdose deaths have been increasing for more than a decade, but they didn't affect life expectancy until recently because of a steep decline in cardiovascular deaths that offset the overdose fatalities.

In the past few years, however, cardiovascular deaths have flattened while overdose deaths have gone up, allowing the deaths of younger Americans to impact overall life expectancy, he said.

“I do think it is a crisis, and if we don’t get a handle on the drug overdose situation, we could have even more years of declining life expectancy. And that really says the health of the United States isn’t doing that well,” he said.