Florida air travel shuts down ahead of Hurricane Irma 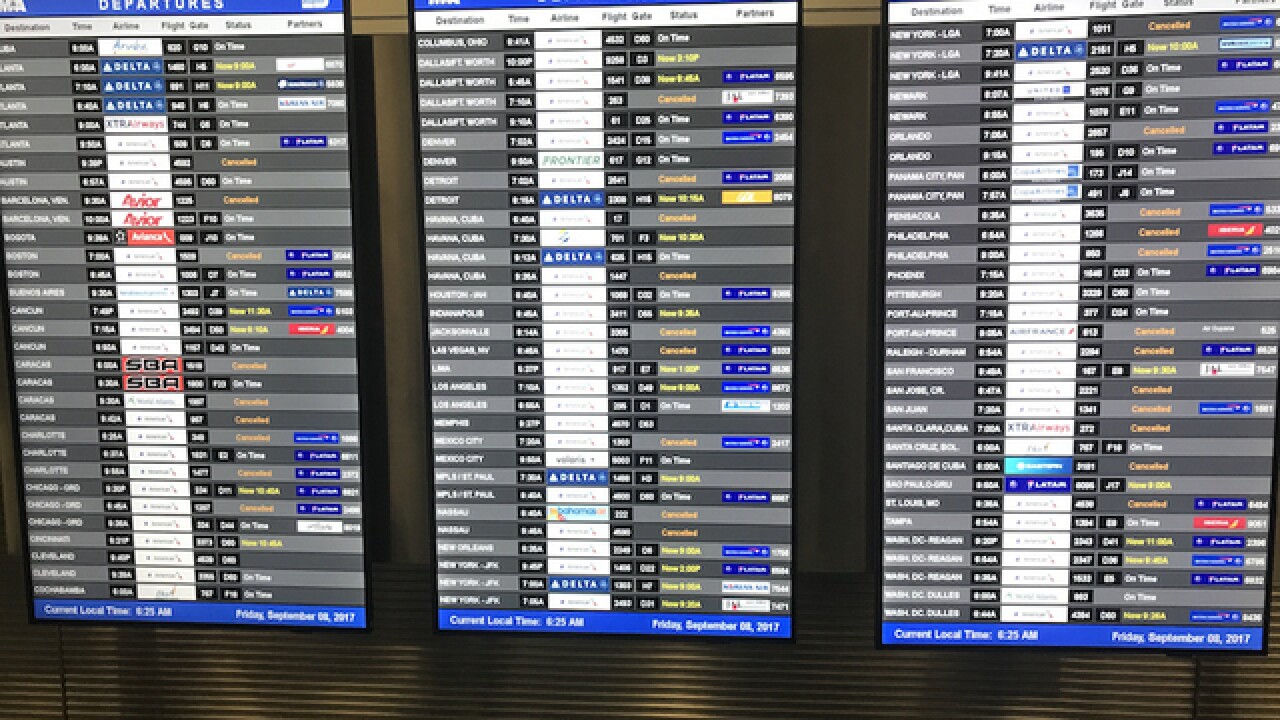 Copyright Getty Images
Kevin Conlon/CNN
<p>A Departures board at Miami-International Airport tells a tale of woe for weary travelers as they try to get out of town ahead of Hurricane Irma.</p>

United Airlines, Southwest Airlines, JetBlue and other carriers are closing up shop at Florida airports after flying as many passengers as possible out of the path of the storm and giving their staff time to prepare.

By late Saturday, Miami, Orlando and Fort Lauderdale - home to the 12th, 13th, 21st largest airports in the U.S., respectively - will be largely dormant as the extreme weather rolls in.

Airlines are also getting aircraft out of Irma's path. Forecast winds are powerful enough to lift empty and stationary jetliners off the ground.

"If it flies, it's not going to be in south Florida," said Ross Feinstein, a spokesman for American.

Irma has already trashed airports, buildings and roads in the Caribbean. St. Maarten, a major international destination for U.S. and European carriers, was in ruins after the storm. Photos from the Netherlands Ministry of Defense showed its runway covered in sand and widespread damage at its terminal building and jetways.

But the prospect of a direct hit from Irma represents another blow to U.S. air travel in one of the busiest air corridors in the world for business and leisure travel.

The Miami, Fort Lauderdale and Orlando airports handled more than 115 million passengers in 2016.

The scramble to get out of the hurricane's path was so acute that the Federal Aviation Administration on Thursday evening said air traffic controllers were increasing the space between flights from Miami and nearby Fort Lauderdale to enable them to better manage the crowded skies. And American Airlines was briefly under an FAA ground stop in Miami due to rerouting outbound aircraft.

The airline added 16 extra flights from Miami on Thursday and another seven on Friday, enough room for more than 4,000 passengers. The Fort Worth-based carrier said it has canceled more than 2,500 flights as of Friday stretching through Sept. 11.

Related: Hurricanes Harvey and Irma may mess with the job market

The biggest single carrier in the Miami-Fort Lauderdale region is American, which accounts of 38% of the flying there, according to Morgan Stanley. Southwest Airlines is the largest single operator in Orlando at 20%.

American will wind down operations in Orlando, which is a three and a half hour drive north from Miami, by 2 p.m. on Saturday. It is also shutting operations in Fort Lauderdale, Fort Myers and West Palm Beach.

Delta Air Lines has also added 5,000 additional seats since Wednesday, with flights out of Florida and Caribbean islands, including the Bahamas, Dominican Republic and Jamaica.

One Friday Delta flight out of Orlando also includes a Boeing 747-400. The aircraft took what was supposed to be its last U.S. domestic revenue flight earlier this month, but was put into service as an extra flight ahead of Irma.

Airlines and airports operate preparedness plans in 72, 48 and 24 hour markers, evacuating aircraft and personnel and preparing stations as part of a methodical checklist ahead of a storm's arrival, according to Ken Jenkins, principal crisis response strategist at NavAid Crisis Consulting Group.

Miami hasn't announced if it will cease commercial flying during the storm, but once sustained winds hit 55 miles per hour, aircraft cannot take off or land. The last commercial flight leaves Miami around 9:30 p.m. Friday, an Air Europa flight to Madrid.

Air traffic controllers may shelter at lower levels in control towers or nearby buildings and will remain on duty, according to the FAA, "and are ready to go back to work as soon as the storm passes."

Related: Airlines scramble as they prepare for Irma

Commercial flights will cease at West Palm Beach Airport at 7:00 p.m., at Fort Lauderdale's airport at 7:45 p.m. and at Key West Airport at 8 p.m. on Friday. Orlando International Airport's final flight is scheduled for 5 p.m. on Saturday and Tampa's is closed to commercial flights as of 8:00 p.m. In Orlando, 50 knot winds will shut down the airport's outdoor tram which shuttles passengers between terminals.

The duration of any shutdown remains uncertain. American said any timeline for resumption of flights will be governed by not only airport conditions, but also the ability of airport and airline staff to get to work.

It's not just commercial airlines getting out of Irma's path.

Farther north in South Carolina, Boeing said it was suspending manufacturing operations starting on Saturday morning. The company's expansive North Charleston facility is flying out any 787 Dreamliner that's able to fly or bringing aircraft inside the factory, which is rated for a category five hurricane.