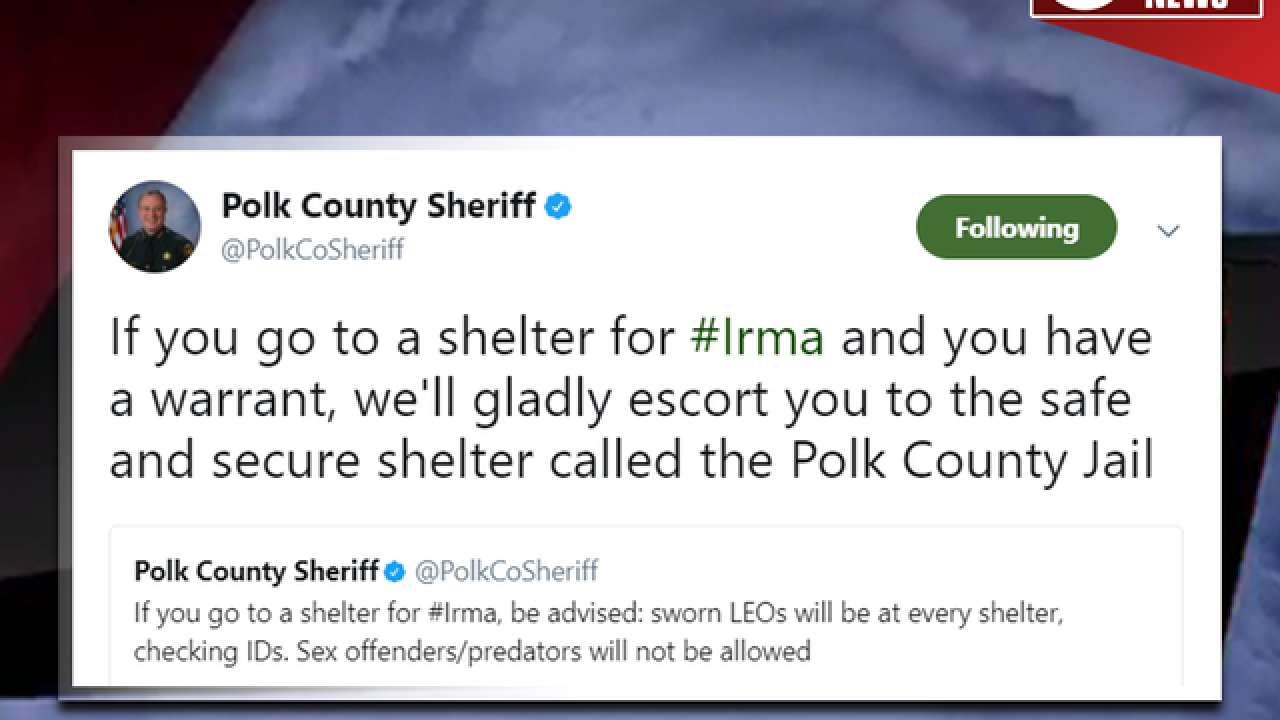 Polk County Sheriff Grady Judd now has a lawsuit filed against him by Nexus Services, Inc. after he tweeted a controversial message to fugitives in Hurricane Irma's path.

Nexus Caridades Attorneys, Inc. is one of the largest providers of pro bono legal services in the country. Nexus Caridades, Inc. is committed to standing up for victims of abuse by government agencies and officials.

According to Nexus, Sheriff Grady Judd and Polk County are engaging in a practice of discouraging people from seeking emergency shelter through fear, and conducting unconstitutional pedestrian warrant checks on Floridians in crisis, who are seeking life sustaining shelter from a major Hurricane.

When asked about the lawsuit, Mike Donovan, CEO of Nexus Services, Inc. stated, “Sheriff Grady Judd knew that people would be afraid because of his statements earlier this week. That fear is causing them to not seek shelter, and that as a result people… Men, women, and children, may die. This storm is deadly, and how many people will die or be injured because of Judd’s reckless tweets? The Sheriff has sworn an oath to protect people, not endanger them. His actions are reckless and unconstitutional, and he needs to be held accountable for his actions."

The Polk County Sheriff drew national attention earlier this week when he issued the following tweet from the department’s official, verified Twitter account (@PolkCoSheriff), “If you go to a shelter for #Irma and you have a warrant, we'll gladly escort you to the safe and secure shelter called the Polk County Jail.”

According to the press release, Sheriff Judd's tweets prompted Nexus Services, Inc. to promptly launch efforts to assist individuals and families with transportation or lodging assistance if they must evacuate but are afraid to do so because of the Sheriff’s threats. A 24-hour hotline was established (813-815-4663) for those who are in fear and in need of help to call.

The filed complaint can be viewed here: http://bit.ly/Sheriff-Polk-Co-Lawsuit-9-10-2017

If you go to a shelter for #Irma and you have a warrant, we'll gladly escort you to the safe and secure shelter called the Polk County Jail https://t.co/Qj5GX9XQBi