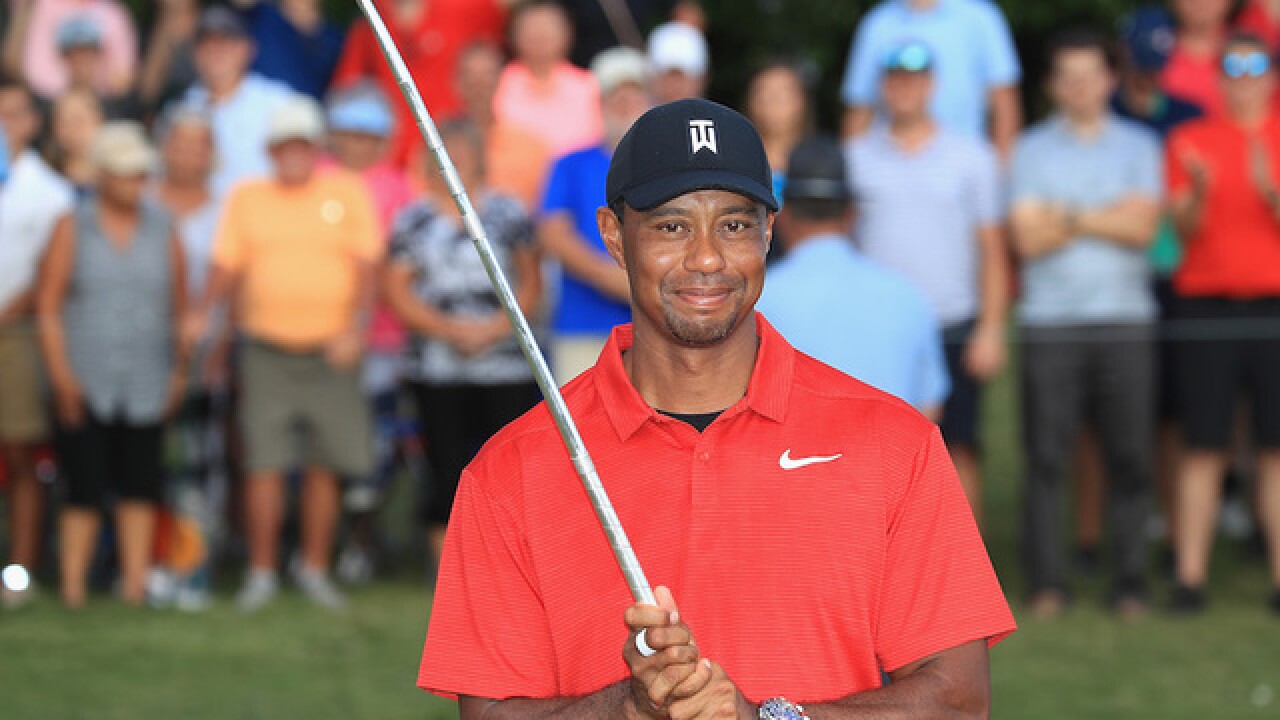 Image copyright 2018 Getty Images. All rights reserved. This material may not be published, broadcast, rewritten, or redistributed.
Sam Greenwood
<p>Tiger Woods of the United States poses with the trophy after winning the TOUR Championship at East Lake Golf Club on September 23, 2018 in Atlanta, Georgia. (</p>

Tiger Woods has won a PGA Tour event for the first time in over five years after victory at the Tour Championship.

The 14-time major winner's triumph at Atlanta's East Lake Golf Club was his 80th on the PGA Tour and his first since August 2013.

Woods finished 11-under par for the weekend, two strokes clear of his nearest challenger Billy Horschel.

Thousands of fans followed the 42-year-old down the 18th fairway, chanting "USA, USA" as Woods sealed his first win in 1,876 days.

"I just can't believe I pulled this off," added a visibly emotional Woods during the presentation ceremony.

"It's been tough. I've had it not so easy the last couple of years and I've worked my way back."

Amid the excitement, it was easy to forget current world No. 1, Justin Rose, had birdied the 18th hole to finish tied for fourth place and secure the FedEx Cup -- which serves as the finale to the PGA Tour season -- as well as a check for $10 million.

"Sorry to rain on the parade, guys!" he joked.

"I would like to take this moment to congratulate Tiger. I think the world of golf is really proud of you right now."

Woods' displays so far in 2018 suggested he was finally over the injury problems that had plagued him in recent years.

He briefly led July's British Open at Carnoustie before finishing sixth and ended as runner-up behind Brooks Koepka at the PGA Championship in August.

Woods' stunning return to form has also seen him return to the Ryder Cup as a player for the first time since 2012.

US captain Jim Furyk selected him as a wildcard for the biennial match against Europe's top golfers, which starts Friday at Le Golf National on the outskirts of Paris.