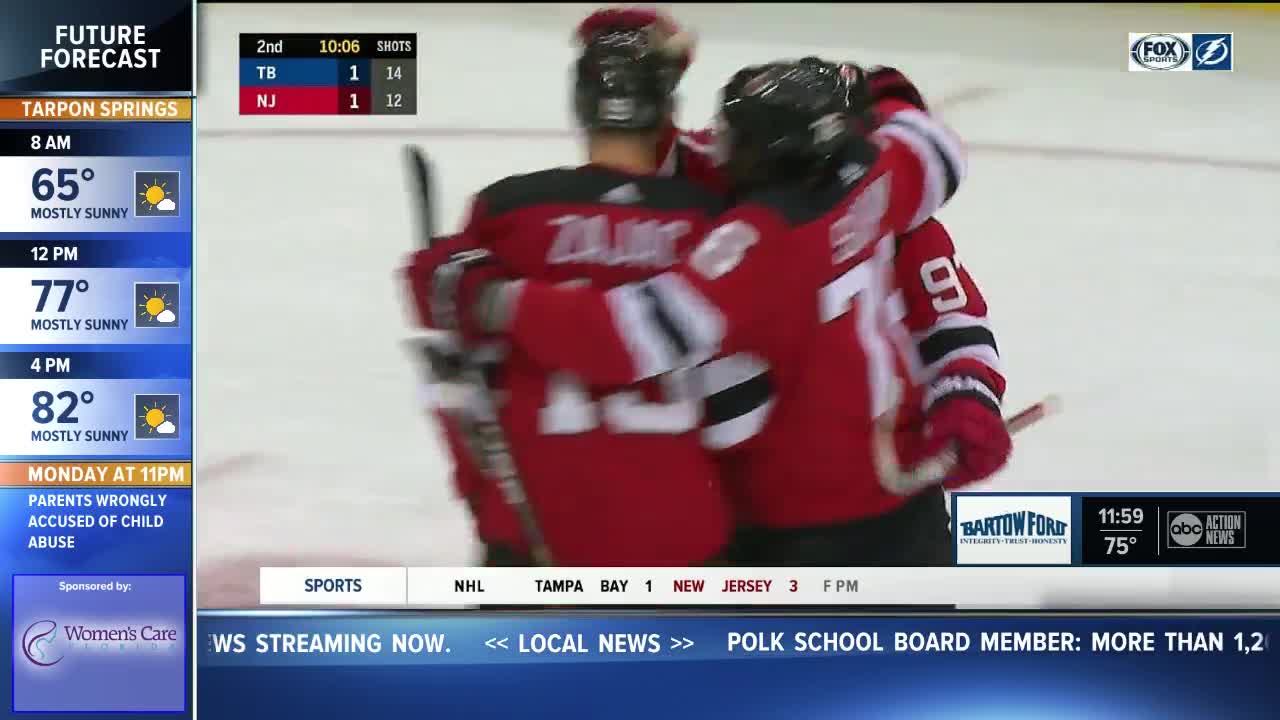 The New Jersey Devils are starting to play their best hockey of the season and it cost the Tampa Bay Lightning their franchise-record tying 10-game winning streak. The improved play wasn’t enough to save the job of Devils general manager Ray Shero. Louis Domingue stopped 26 shots against his former team as the Devils handed the Lightning their first loss since Dec. 21 with a 3-1 victory Sunday night. NEWARK, N.J. (AP) — The New Jersey Devils are starting to play their best hockey of the season and it cost the Tampa Bay Lightning their franchise-record tying 10-game winning streak.

The improved play wasn’t enough to save the job of Devils general manager Ray Shero.

Louis Domingue stopped 26 shots against his former team as the Devils handed the Lightning their first loss since Dec. 21 with a 3-1 victory Sunday night.

The Devils’ second win in two days — they beat Washington on Saturday — came with a bizarre twist. Shero was fired by owner Josh Harris earlier in the afternoon and most of the players didn’t find out until 90 minutes before the opening faceoff.

“You beat two of the best teams in the league back to back nights, prove to yourself you got what it takes in this locker room and that’s a lot of fun,” forward Blake Coleman said. “On the other side of the coin, a great leader isn’t with us anymore and he’s the reason we’re all in this room.″

Travis Zajac, Andy Greene and Miles Wood scored for the disappointing Devils, who made the playoffs once in Shero’s four-plus year tenure. They fired coach John Hynes in early December.

Tyler Johnson scored for the Lightning, who tied their consecutive wins record on Saturday with a 1-0 win over Philadelphia. Curtis McElhinney made 17 saves in getting the start in place of Andrei Vasilevskiy, who had shutouts in the last two games.

The winning streak was tied for the longest in the league this season. The Islanders also won 10 in a row.

“We’ve been playing some pretty good hockey,” Johnson said. “The schedule hasn’t been too kind to us. It’s up to us to throw those together and play complete team games. It says a lot about us. I think we’ve grown. Tonight wasn’t our night. Now we turn the page and hopefully start all over.”

Domingue, who was 21-5-0 with the Lightning last season before being shipped to New Jersey on Nov. 1, started both games during the weekend. He made a save on a Nikita Kucherov from the slot in the later half of the second period to preserve the lead.

“It’s such an important game for me.” Domingue said. “Not only am I playing against my old team, I am trying to stick in this league and show that I can play. It’s a daily thing. It’s not something you do over time. You have to do it every single day. A lot at stake tonight. I can’t even describe the feeling I have right now. It’s like winning my first game all over again.”

After a scoreless first period, the teams traded goals early in the second.

Zajac got the game winner, deflecting a shot by Nikita Gusev.

Johnson beat Domingue in close in the opening minute and Greene tied the game at 3:10 with a shot from the left point for his first goal of the season.

It also was the first goal allowed by the Lightning in 169:05. They had shut out Arizona and Philadelphia in their last two games.

Wood scored into an empty net with a second to play.

“I feel we have beaten a lot of good teams lately,” Zajac said. “Those games feel good when you do it. It just gives you confidence when you know you can play against some of these elite teams that are Stanley Cup contenders.”

NOTES: Devils recalled G Cory Schneider from Binghamton on Sunday. ... G Evan Cormier was sent to the AHL team. ... Lightning D Erik Cernak played in his 100th NHL game. ... No. 1 overall draft pick Jack Hughes returned to Devils’ lineup after missing five games with an upper-body injury and had an assist on Greene’s goal. ... New Jersey leading goal scorer Kyle Palmieri (16) was out with a lower-body injury. ... Lightning LW Pat Maroon was out with undisclosed injury. ...Gusev lost a third-period goal because Coleman interferred with McElhinney.