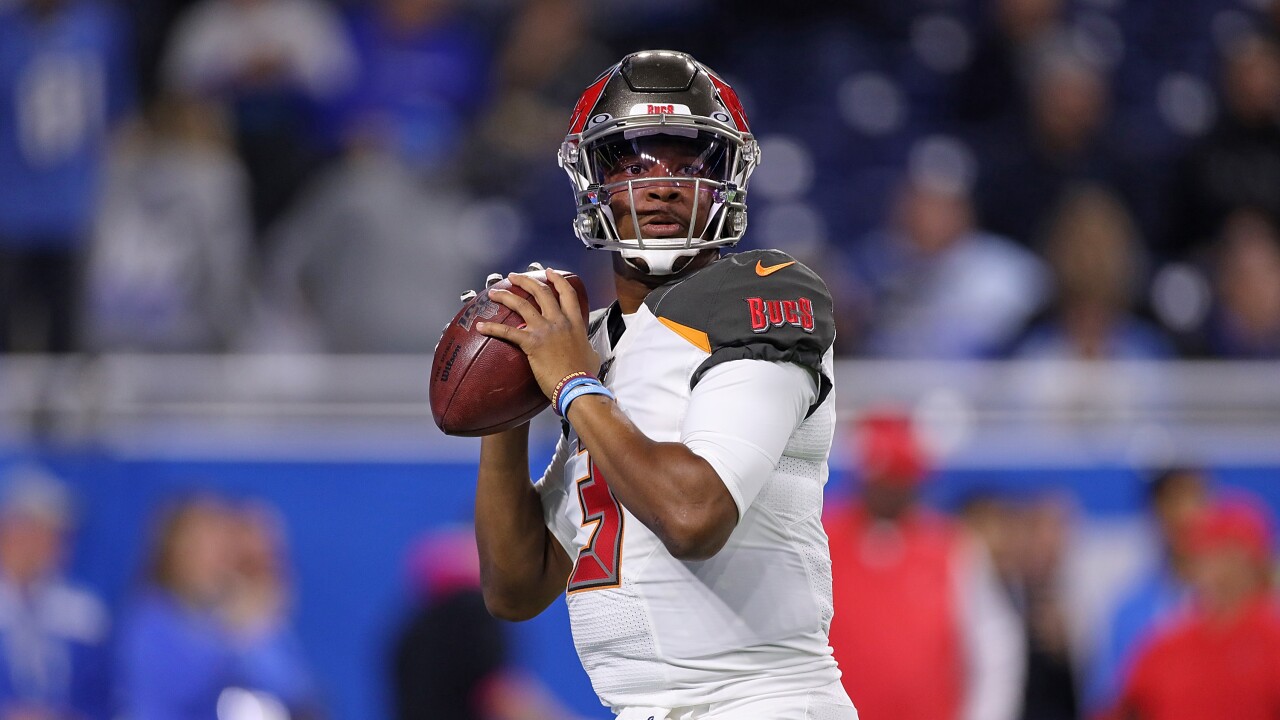 DETROIT (AP) — Jameis Winston is making quite a case to stay in Tampa Bay.

Winston became the first player in NFL history to throw for 450 yards in consecutive games, leading the Tampa Bay Buccaneers to a 38-17 win over the Detroit Lions on Sunday.

He threw three touchdowns in the first half — four overall — and a career-high 458 yards passing one week after throwing for 456 yards.

Even though both Tampa Bay and Detroit won't reach their goals this season, Winston made the most of his opportunity to show the Buccaneers they should give him a new contract when his deal expires following the season.

“I hope I helped myself because I definitely want to be here in Tampa," he said.

Winston, playing with a small fracture in his right thumb, completed 28 of 42 passes and set career highs with 221 yards passing in the first quarter and 308 yards by halftime.

The No. 1 pick overall from the 2015 draft did throw a league-high 24th interception on the opening possession, but he more than made up for the miscue.

The Buccaneers (7-7) have won four straight and five of six, but their surge started too late for them to get in the playoffs race.

“We’re trying to finish off on a very, very positive note," first-year coach Bruce Arians said. “It means a ton."

Detroit (3-10-1) has dropped seven games in a row and 10 of 11, increasing the scrutiny on embattled coach Matt Patricia.

The Lions looked like they were still competing for their coach, and themselves, after falling behind 21-0 in the first half. Rookie running back Wes Hills, who was signed Saturday, ran for a second TD early in the fourth quarter in his NFL debut to cut Tampa Bay's lead to 24-17.

“I think the one thing that is consistent is the team fights," Patricia said. “They work hard, really regardless of who’s out there.”

The comeback hopes ended with a thud.

Sean Murphy-Bunting returned an interception 70 yards for a score and a 14-point lead with 5:12 remaining.

“Ultimately, was kind of the dagger in the game," Detroit quarterback David Blough said after making his third straight start in place of injured quarterback Matthew Stafford.

Winston took advantage of time to throw to connect with Breshad Perriman for a 34-yard TD and Scotty Miller for a 33-yard score in the first quarter.

“He was dropping dimes as soon as we got out of the tunnel,” said Perriman, who set career highs with three TD receptions and 113 yards receiving.

Winston threw a 25-yard TD to Perriman in the second quarter, keeping the team's passing game clicking even with standout receiver Mike Evans out with a hamstring injury.

Winston's pace slowed in the second half in part because receiver Chris Godwin left the game with a hamstring injury in the third quarter. Godwin had five catches for 121 yards.

The Lions did not have a first down on offense without the benefit of a penalty until midway through the second quarter. Matt Prater had a 44-yard field goal late in the first half.

Blough finished 24 of 43 with two interceptions. Lions receiver Danny Amendola had eight receptions for 102 yards, briefly giving the Lions and their fans hope in the second half.

“When you don’t start fast, you’re going to be behind it from the start," Patricia said. “It’s going to be a play here or there, where if it doesn’t go your way, and you don’t make a play happen, then you’re right back into that tough situation.”

Tampa Bay's Shaquil Barrett had a sack, giving him 16 1/2 this season to match the franchise record set by Hall of Fame defensive tackle Warren Sapp in 2000.

“That’s a huge record," Arians said. “I don’t think we can overlook that one at all."

SON OF A LION

Perriman had the best game of his four-year, three-team career against the franchise his father, Brett, caught 25 TDs for from 1991-96.

“My dad got dementia, but he's doing good," he said.

Buccaneers: Miller went out with a hamstring injury after he scored in the first quarter. TE Tanner Hudson was evaluated for a concussion in the second half.