Who will be the next head coach for the Bucs? 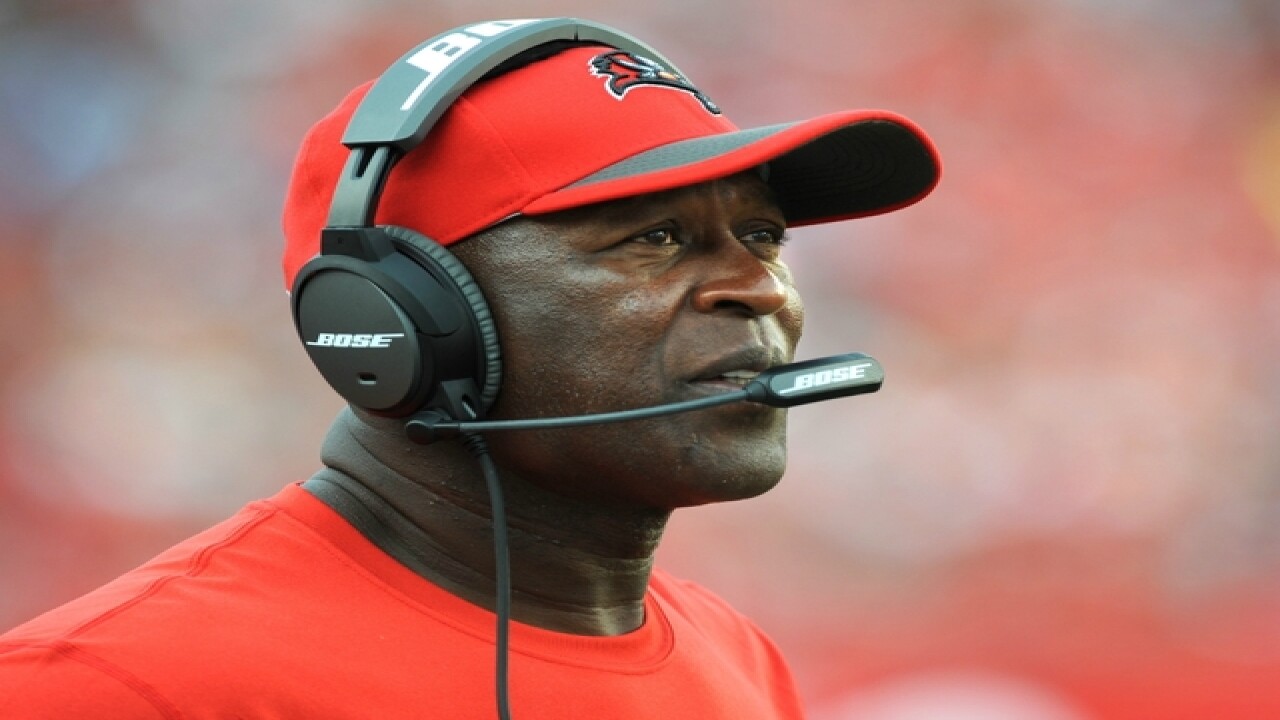 By: Sander Philipse, SBNation.com
Posted at 8:35 AM, Jan 07, 2016
The Tampa Bay Buccaneers are starting on their third head coaching search in five years, having just fired Lovie Smith. It's still early and there have been just a few hours since Smith was fired, so we don't have a good view of what the Bucs are looking for right now. Two years ago, they hired Smith without interviewing anyone else. In 2012, they hired Greg Schiano after a month-long coaching search. This one could go either way.

The only name to have been mentioned so far is Dirk Koetter's, but the Bucs will need to interview at least one minority candidate to adhere to the Rooney Rule. So let's take a quick look at most of the head coaching candidates and what their qualifications are.
Dirk Koetter
Bucs offensive coordinator
The Bucs' current offensive coordinator with whom most Bucs fans appear to be in love. Retaining Koetter would provide some much-needed continuity for Jameis Winston. He's also the only person to actually be linked to the job via reports so far.
Chip Kelly
Former Eagles head coach.
The Bucs tried to hire him in 2012, but he snubbed them. He's also won a lot more NFL games over the past three years than Lovie Smith. Then again, Jameis Winston isn't an ideal Kelly quarterback, and he did blow up half the Eagles roster leaving them arguably in a worse position than when he was hired. This hire wouldn't make a ton of sense, all things considered.
Josh McDaniels
Patriots offensive coordinator.
General manager Jason Licht is heading this coaching search and he has a long history with the New England Patriots. McDaniels made his name as the Patriots offensive coordinator (twice), bookending a disastrous and Tim Tebow-afflicted attempt to run the Denver Broncos. Meanwhile, McDaniels' name keeps coming up year after year as a head coaching candidate, most recently being linked to the Miami Dolphins. Getting an offensive guru would make some sense, though it would also likely mean saying goodbye to Dirk Koetter.
Noteworthy: hiring Patriots coaches or those endorsed by Bill Belichick hasn't exactly worked out for the Bucs in the past.
Hue Jackson
Bengals offensive coordinator.
Speaking of offensive gurus, how has Hue Jackson not gotten more opportunities to be a head coach? He was probably the most successful head coach the Raiders had in the decade prior to this season and has done a terrific job as an offensive coach wherever he's been. He's been linked to the Miami Dolphins and San Francisco 49ers openings.
Matt Patricia
Patriots defensive coordinator.
More Patriots! This time, their bearded defensive coordinator who looks more like an offensive lineman than an NFL coach. He's been with the Patriots since 2004, taking on the coordinator role in 2012 and has done a very good job with ever-shifting personnel. The Miami Dolphins and the Cleveland Browns have been linked to him.
Mike Pettine
Former Browns head coach.
Former Browns head coach and long-time Rex Ryan coordinator, he was fired for making a total mess of the Browns offense and quarterback position despite doing pretty well on defense, there. He hasn't been linked to any open jobs yet so the Bucs could also consider him as defensive coordinator.
Teryl Austin
Lions defensive coordinator.
The Lions defensive coordinator has been linked to the Miami Dolphins and Cleveland Browns jobs. He's done a good job in Detroit the past two years, and has a history as a secondary coach with the Arizona Cardinals, Seattle Seahawks and Baltimore Ravens since 2003, as well as a one-year stint as the defensive coordinator with the Florida Gators.
Sean McDermott
Panthers defensive coordinator.
The Panthers defensive coordinator since 2011, he's presided over one of the league's best defenses over that period. He was with the Philadelphia Eagles from 1999 to 2010 in various roles before moving to Carolina, where he must have met Jason Licht who was with the Eagles from 2006 through 2008. McDermott will be interviewed for the New York Giants head coaching position and is likely to get some more interest as well.
Adam Gase
Bears offensive coordinator.
This is the guy everyone wants to interview. He's had one interview with the Philadelphia Eagles with a second coming, he's scheduled to interview with the Miami Dolphins, and has been linked to the New York Giants. He rose to prominence after being Peyton Manning's quarterbacks coach and then offensive coordinator from 2011 through 2014, and helped Jay Cutler have arguably his best year ever in 2015.
Harold Goodwin
Cardinals offensive coordinator
Here's a name no one's mentioned before: the Arizona Cardinals' offensive coordinator. Spent time as an offensive line assistant with the Chicago Bears and Pittsburgh Steelers, and had one year as the Indianapolis Colts' offensive line coach in 2012. He's been with the Cardinals since 2013, which means Jason Licht had one year with him -- and the Cardinals have done an amazing job on offense over the past three years.
Pat Shurmur
Eagles interim head coach
Not likely to be available given that he's the front-runner for the Philadelphia Eagles job, but he has a long history as an offensive coordinator and was the Browns head coach from 2011 through 2012 where he went 9-23. Apparently rehabilitated his reputation by implementing Chip Kelly's scheme in Philly.
Dan Campbell
Dolphins interim head coach
Took over for Joe Philbin as Dolphins head coach in-season and went 5-7 this past year. Campbell was the Dolphins tight ends coach before being hired as their head coach, and was an NFL player from 1999 through 2009. Doesn't have a lot of experience, but the Dolphins are at least giving him a chance to interview.
Doug Marrone
Former Bills head coach
Hey remember the last time the Bucs hired a college coach with a mediocre resume and a reputation for being a shouty disciplinarian? Yeah, that's not happening again.
Ben McAdoo
Giants offensive coordinator
Has coached Aaron Rodgers and Eli Manning, so I'm sure he'd do well with Jameis Winston. He's interviewing for the Giants and Eagles jobs, so there's some interest out there for him. Not sure why the Bucs would hire him over Dirk Koetter, though.
Mike Smith
Former Falcons head coach
Is basically Lovie Smith with more recent NFL success. Interviewed for the Dolphins head coaching job.
Mike Shanahan
Former Broncos and Washington head coach
Still getting head coaching interviews for some bizarre reason.
This article originally appeared on SBNation.com and is used with permission. Follow author Sander Philipse on Twitter.
SBNation.com