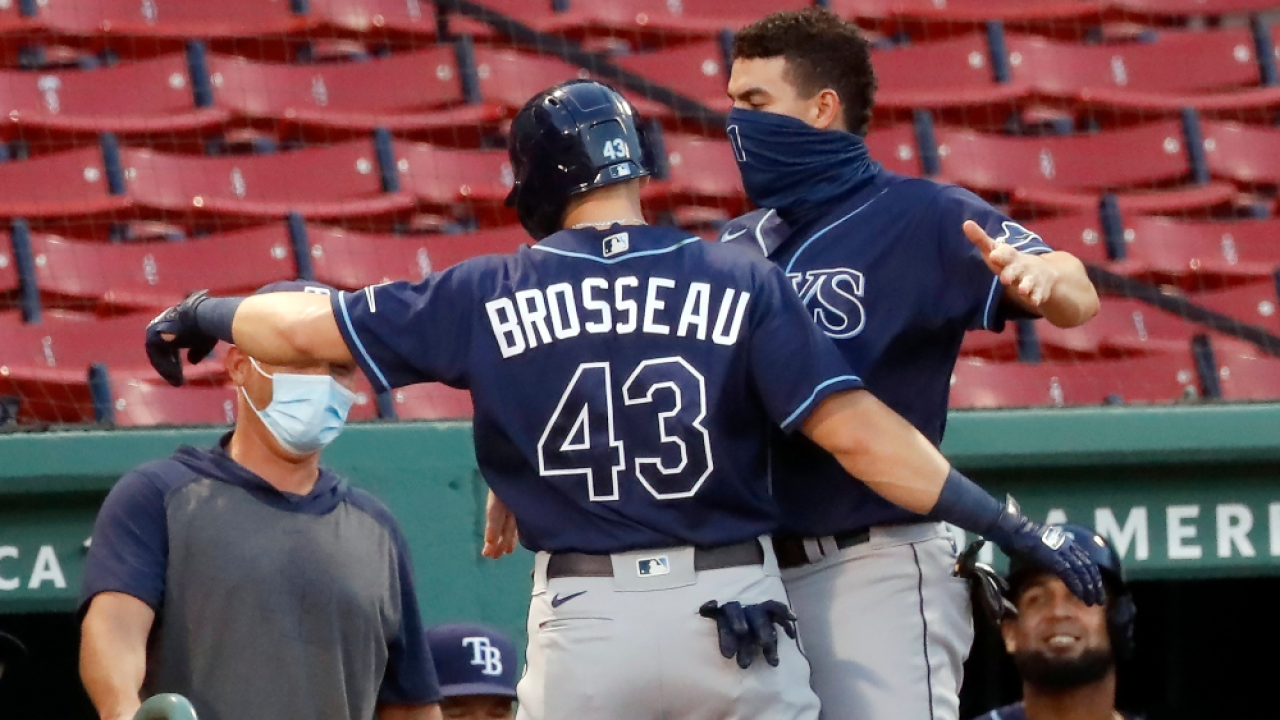 (Copyright 2020 The Associated Press. All rights reserved. This material may not be published, broadcast, rewritten or redistributed.)
AP Photo/Michael Dwyer
Tampa Bay Rays' Michael Brosseau (43) celebrates his solo home run during the first inning of a baseball game against the Boston Red Sox, Tuesday, Aug. 11, 2020, in Boston.

BOSTON (AP) — Mike Brosseau led off the game with a home run, Yandy Díaz and Hunter Renfroe each had two RBIs and the Tampa Bay Rays continued their offensive onslaught against the Boston Red Sox in a 8-2 win Tuesday night.

Brosseau hit Boston starter Martín Pérez’s sixth pitch of the game into the Rays’ bullpen in right for his first career leadoff homer.

“It’s a good feeling knowing the manager has the confidence to put you in the leadoff spot,” Brosseau said. “(Manager Kevin Cash) made a little joke with me prior to that first at-bat, about making him look good. I’m glad I was able to do that.”

Brosseau, Díaz and Manuel Margot had multihit games as Tampa Bay won its fourth straight game. The Rays had a season-high 16 hits in an 8-7 win to open the four-game series Monday.

Tampa Bay starter Andrew Kittredge exited with right elbow soreness after throwing only five pitches. Kittredge was pitching in an opener role after recording the final two outs for his first career save on Monday.

“It was something I’ve never felt before. But as soon as I came out of the game it started to feel better,” Kittredge said. “Feel great now, but the last pitch, just the forearm kind of tightened up there.”

Michael Chavis and Alex Verdugo each hit RBI singles for the Red Sox. Pérez (2-2) allowed two runs on three hits and struck out five in 5 2/3 innings after tossing five scoreless innings in a 5-0 win at Tampa Bay last Wednesday.

“We played a really good game for six innings,” Red Sox manager Ron Roenicke said. “We didn’t swing it again, but it was a good ballgame until then.

Boston has lost seven of its last 10.

“We’ve been struggling a little bit, but we still have games (left),” Pérez said. “Just (have to) turn the page and put all the pieces together to find a way to win.”

Willy Adames reached on a one-out single and was doubled in by Margot to begin a six-run seventh. Brandon Lowe pinch hit for Brosseau after Mike Zunino walked and lined an RBI double.
Díaz hit an RBI single, Lowe scored on a passed ball and Renfroe followed with a two-run double.

“We were able to get to their bullpen and just have big at-bat after big at-bat,” Cash said. “Put a crooked number up there in one big inning that gave us some breathing room.”
Chavis singled in the second and Verdugo singled in the eighth to produce the only Red Sox runs.

WE WANT THE CUP

The hand-operated Fenway Park scoreboard in left field hasn’t listed out of town baseball scores with no fans present, but “Carolina vs. Bruins” was displayed in support of the Bruins’ playoff series with the Hurricanes.

However, a yellow “P” was hung up on the board following the game’s postponement to Wednesday after the Tampa Bay Lightning and Columbus Blue Jackets played to five overtimes at the Toronto bubble.

Rays: Kittredge will be evaluated Wednesday and is day-to-day. … LHP Brendan McKay (undisclosed) was shut down for seven to 10 days due to shoulder irritation that dates back to last season. McKay was building up for a return when he began experiencing tightness. … RHP Yonny Chirinos (right triceps inflammation) played catch Tuesday and feels “really, really good,” manager Cash said. Chirinos is on track to throw a bullpen session in the coming days.

Red Sox: 3B Rafael Devers (left ankle) was not in the lineup for a second straight game. Devers hit in the cage, fielded ground balls and did some running Tuesday. “He’s doing way better,” Roenicke said. … 1B Mitch Moreland returned after tweaking his left knee Sunday against Toronto. … LHP Josh Taylor (undisclosed) could return in a week while LHP Darwinzon Hernandez (undisclosed) is slightly behind his timetable.

Red Sox: RHP Zack Godley (0-1, 3.97 ERA) will pitch on three days’ rest, but Roenicke said the plan is for him to make more of a conventional start.