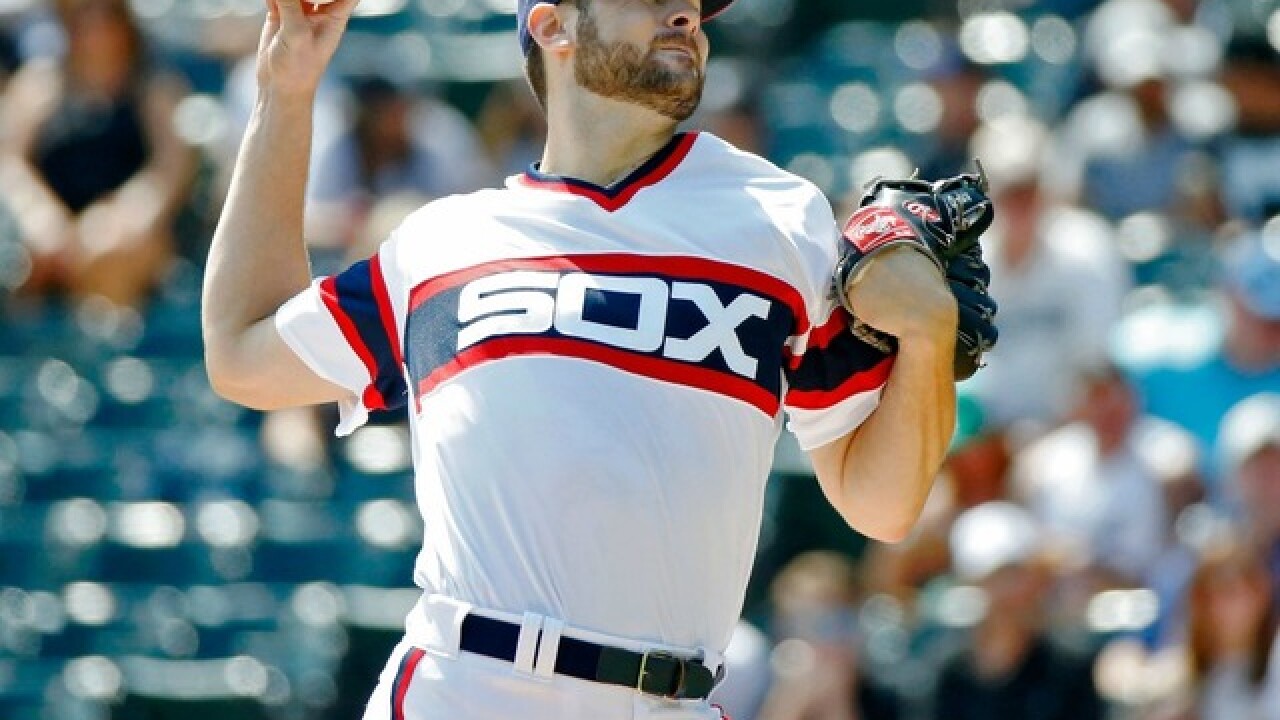 Image copyright 2017 Getty Images. All rights reserved. This material may not be published, broadcast, rewritten, or redistributed.
Jon Durr/Getty Images
<p><span>CHICAGO, IL: Lucas Giolito of the Chicago White Sox pitches against the Tampa Bay Rays during the first inning at Guaranteed Rate Field on September 3, 2017 in Chicago, Illinois.</span></p>

While the Chicago White Sox are going nowhere this year, Lucas Giolito is providing a bit of hope for their rebuilding project.

Giolito struck out 10 in seven sharp innings, Jose Abreu homered in his return to the lineup and the White Sox beat the Tampa Bay Rays 6-2 on Sunday.

The 23-year-old Giolito (2-1) allowed a run and three hits in his third start since being called up from the minor leagues last month. He pitched seven scoreless innings in his previous start against Detroit for his first major league win.

"You always want to win," said Giolito, who was acquired last December in a trade with Washington. "That is my goal every time I go out there, I want to give my team a chance to win and put up as many zeroes as possible. We have young talent starting to work together and build up together. It is really fun."

Tim Anderson added three hits, including his 15th homer, and drove in three runs as the lowly White Sox handed the Rays a setback in the AL wild-card race by taking two of three in the weekend series.

Abreu missed the previous three games with a right elbow injury and had to lobby to play in the series finale against Tampa Bay. He was not in Rick Renteria's original lineup, but the manager liked what he saw in the batting cage before the game.

Abreu responded with a two-run shot in the third inning that made it 3-0 White Sox. The 30-year-old first baseman leads the team with 27 homers and 82 RBIs.

Giolito struck out the side in the seventh before exiting with 103 pitches. Derek Holland and Gregory Infante got the final six outs.

"With a guy like that (Giolito), you don't expect him to command -- I mean, we've been watching video on him for the last week, and he hasn't commanded those two pitches, his changeup and curveball, all week long," Rays outfielder Steven Souza said. "So you come out here and for anybody in the league to throw three pitches for strikes, it's going to be a tough battle."

Matt Andriese (5-2) took the loss in his first start since June 10, allowing five runs and six hits in five innings.

Lucas Duda hit his 26th homer and Adeiny Hechavarria went 3 for 3 for the Rays, who remain four games behind Minnesota for the second AL wild card.

Tampa Bay slugger Logan Morrison came within a few feet of homering for the fourth straight game, but Adam Engel hauled in his fourth-inning fly ball at the wall in center field. Morrison has six homers in his past seven games, and 26 of his career-high 35 have come on the road.

The Rays called up right-handers Chase Whitley and Andrew Kittredge from Triple-A Durham. Both pitched in relief in the loss, combining for 2 1/3 perfect innings.

Whitley struck out each of his four batters.

Rays: RHP Chris Archer, who was removed as a precaution in the first inning on Saturday night, said his arm still felt "tight," but the Rays remain optimistic the injury isn't serious. He is expected to see team doctor Koco Eaton on Monday.

White Sox: INF Tyler Saladino (left hand) was scratched from the lineup. The injury occurred on a slide at second base on Saturday night. Renteria said Saladino could have played if Abreu wasn't ready.