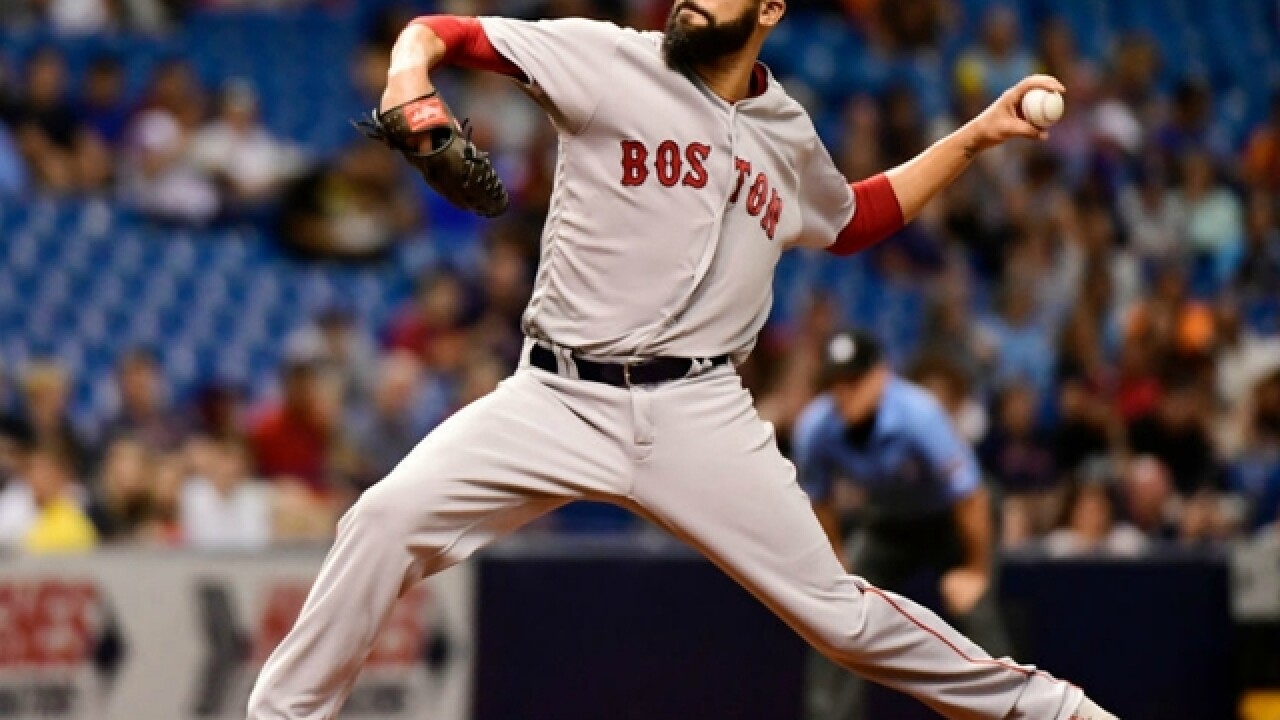 Image copyright 2018 Getty Images. All rights reserved. This material may not be published, broadcast, rewritten, or redistributed.
Julio Aguilar/Getty Images
<p>ST PETERSBURG, FL: David Price of the Boston Red Sox throws a pitch in the first inning against the Tampa Bay Rays on May 23, 2018 at Tropicana Field in St Petersburg, Florida</p>

The 4-1 win over the Tampa Bay Rays was accomplished with six strong innings from David Price and a three-run ninth sparked by an RBI double by Xander Bogaerts. The Rays, who have lost nine of 12 to the Red Sox this season, contributed an error, a wild pitch and a passed ball to the big inning.

"That's us coming together as a team," said Mookie Betts, whose three-run homer won Tuesday night's game. "Today we had great pitching. I don't think there were many good swings on (Price's) pitches. He did everything today."

Price pitched three-hit ball, allowing a run while striking out nine. Joe Kelly (3-0) got the win and Craig Kimbrel pitched the ninth for his 15th save.

It was 1-1 when Bogaerts got up to bat in the ninth after a throwing error by shortstop Willy Adames. Bogaerts doubled into the left field corner off Alex Colome (2-5) to drive in J.D. Martinez. After a wild pitch, Eduardo Nunez drove in a run with a sacrifice fly, and Boston tacked on another on a passed ball.

"You know it's my fault in the ninth making that error," said Adames, who was playing only his second major league game. "It's a tough for me with that error and getting the L for the team."

Adames had thrown out Nunez at the plate after a two-out double by Jackie Bradley Jr. in the fifth, preserving a scoreless tie.

The Rays did not get a runner into scoring position until the sixth, when C.J. Cron doubled off the center field wall, their third and final hit. That hit drove in Denard Span following a leadoff walk.

Price, who had won his two preceding starts, left after throwing 90 pitches in six innings.

"The last inning was a high-leverage, stressful inning and we felt good with the six," explained manager Alex Cora.

Christian Vazquez got Boston on the board in the sixth, singling off starter Chris Archer and later scoring when Hanley Ramirez bounced into a bases-loaded double play.

Archer has won only one of his last 20 starts against Boston. He gave up one run, four hits and three walks in six innings, striking out six.

The game featured eight hits and 24 strikeouts, including four in a row by Rays reliever Jose Alvarado.

With the loss of RHP Jake Faria to an injury and Wednesday's call up of LHP Vidal Nuno, the Rays are down to two starting pitchers on a 13-man staff, setting up the possibility of "bullpen days" for all three of the upcoming weekend games against Baltimore.

Last weekend, Romo became the first pitcher since 2012 to start on consecutive days.

Red Sox: A decision will be made on the status of 2B Dustin Pedroia (recovering from left knee surgery) after Thursday's game at Triple-A Pawtucket. Pedroia could be activated for this weekend's series at Fenway Park.

Rays: Faria went on the 10-day disabled list after straining his left oblique Tuesday night, and the Rays expect him to miss at least two months. ... C Wilson Ramos, who left Tuesday's game early with a left hand contusion, was available but did not start. ... RHP Nathan Eovaldi (loose bodies in right elbow) gave up eight runs on 10 hits in four innings in his fourth rehab start for Triple-A Durham. Eovaldi is eligible to come off the disabled list Monday.

RHP Rick Porcello (8-3, 2.43 in 13 careers starts at Tropicana Field) will pitch for Boston in Thursday night's series finale. Rays LHP Blake Snell (2-3, 4.13 in in six career starts against the Red Sox) has given up two runs or fewer in eight of his 10 starts this season.