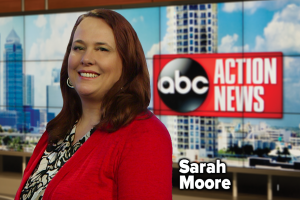 Tampa Bay area multimedia news provider. She was promoted from the

position of Assistant News Director and takes over the new position

Moore has held key leadership positions in newsrooms around the

country, including Indianapolis and Nashville. With a background of over18 years in journalism, she has personally won multiple Emmy and AP

awards, as well as being part of the leadership team awarded news

“Sarah is a proven newsroom leader. During her time at ABC Action

News, she has been key in helping create and execute content strategies,”

said General Manager Nick Nicholson. “She is the natural choice to lead

our news organization in this rapidly evolving news environment.”

Since 2010, ABC Action News has been singled out by other journalists

and named Florida’s “Best Overall News Organization” by the Associated Press six years in a row. The news station also received the prestigious

journalists,” said Moore. “We’ll continue to build on our success in