New Year celebrations from around the world 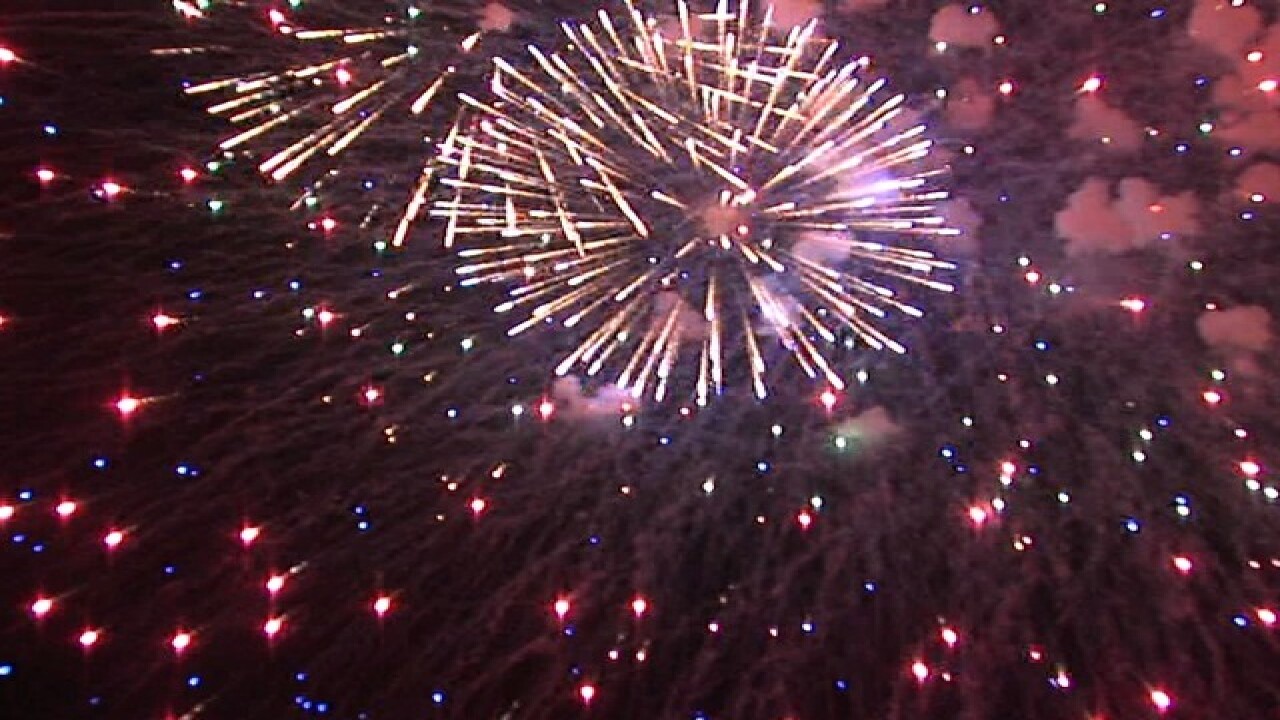 As the final hours of 2015 draw to a close, many are bidding a weary and wary adieu to a year marred by attacks that left nations reeling and nerves rattled. Still, most places are forging ahead with their celebrations as many refuse to let jitters ruin the joy of the holiday.

"We still have this fear but we need to continue to live," said Parisian Myriam Oukik. "We will celebrate."

A look at how people around the world are planning to do exactly that:

Australian officials, struggling to contain the threat from home-grown extremists, encouraged revelers to enjoy the evening and assured that thousands of extra police would be out patrolling the major cities.

"Don't change your way of life," Melbourne's Lord Mayor Robert Doyle recently urged residents of the nation's second-largest city, expected to gather by the hundreds of thousands despite blistering temperatures to watch nearly 11 tons of fireworks light up the sky. "Don't let events from around the world challenge the way that we live."

Melbourne's rival, Sydney, takes seriously its position as one of the first major cities in the world to ring in each new year and plans to celebrate in its typical showy fashion. More than 1 million are expected to gather along the famed harbor to watch a glittery display featuring a multicolored firework "waterfall" cascading off the Harbour Bridge and pyrotechnic effects in the shapes of butterflies, octopuses and flowers.

New Year's Eve is Japan's biggest holiday, and millions crammed into trains to flee the cities for their hometowns to slurp down bowls of noodles, symbolizing longevity, while watching the annual Red and White NHK song competition. As midnight approaches, families bundle up for visits to neighborhood temples, where the ritual ringing of huge bronze bells reverberates through the chill.

Tokyo is on special alert for security issues this year, with posters in subways and other public spaces warning people to keep their eyes open for suspicious packages or activities.

South Koreans will mark New Year's Eve with traditional bell ringing ceremonies, fireworks and outdoor music and dance performances. Thousands of people, including North Korean refugees, are expected to gather at a town near the border with rival North Korea to watch one of the ceremonies and wish for peaceful Korean unification.

In her New Year's message, South Korean President Park Geun-hye stressed again that her government is open to dialogue with North Korea but it will "resolutely" cope with any provocation by Pyongyang.

North Korea is expected to mark the new year with a speech by leader Kim Jong Un, which outside observers use to pore over for insight on the reclusive country's policy direction.

Security has been beefed up in Malaysia's biggest city, Kuala Lumpur, where fireworks will ring in the new year at a historical square as well as at the Petronas Twin Towers, one of the world's tallest towers.

Malaysian authorities have detained more than 150 suspects linked to the Islamic State group over the past two years, some of whom were allegedly plotting to launch attacks in strategic areas of Kuala Lumpur. In September, the U.S. Embassy warned of a potential terrorist threat at a popular hawker street and its surrounding areas in the city.

An official New Year's Eve celebration is planned near Beijing's Forbidden City with performances and fireworks, and one of China's most popular TV stations will broadcast a gala from the National Stadium, otherwise known as the iconic Bird's Nest.

For security reasons, Shanghai is closing subways near the scenic waterfront Bund because of a stampede last New Year's Eve that killed 36 people and blemished the image of China's most prosperous and modern metropolis.

Beijing's shopping and bar areas are under a holiday security alert that started before Christmas and has resulted in armed police standing guard at popular commercial areas. Police commonly issue such alerts during holiday periods to ensure safety.

No specific threats timed for New Year's revelries have been detected in the capital, Manila, or other major cities, although government forces are always on alert due to the presence of small but violent Muslim militant groups in the country's south.

Concern on New Year's Eve is instead focused on the use of illegal fireworks, which last year injured more than 850 people. Shopping malls and cities have organized fireworks displays to discourage people from lighting their own firecrackers. A huge religious sect, the Iglesia ni Cristo, will attempt to break the world record for the largest fireworks display and the highest number of sparklers to be lit in one place.

Less than six months after a pipe bomb killed 20 people at the Erawan Shrine in Bangkok, tens of thousands are expected to ring in the new year at the same intersection with live music and a countdown.

Up to 5,000 police will be in the area, with explosive ordnance disposal experts making a sweep ahead of time.

Noisier still will be the celebration along the Chao Phraya River, where tourism officials have promised spectacular fireworks over two of the kingdom's most iconic landmarks, the Grand Palace and Wat Arun — the Temple of Dawn.

Indonesia is on high alert after authorities said last week that they had foiled a plot by Islamic militants to attack government officials, foreigners and others in the world's most populous Muslim nation.

About 150,000 police officers and soldiers have been deployed to safeguard churches, airports and other public places.

More than 9,000 police are deployed in Bali, the site of Indonesia's deadliest terror attack, which killed 202 people in 2002.

Hotels and restaurants in and around New Delhi have been advertising grand party plans with live bands, dancing and plenty of drinks.

With security being a concern, police and anti-terror squads on Tuesday conducted mock terror-attack drills at a crowded shopping mall and food court. Witnesses, however, were unimpressed. Mona Arthur, a Delhi journalist who was in the mall at the time, dubbed the exercise a "mockery of a mock drill."

She and a friend were shopping when two police officers ran past them. Then a security official said two terrorists had entered the mall.

"The whole thing was comical," said Arthur, who was irritated that no information was given to shoppers on where to go or what to do.

In the megacity of Dubai, three separate firework displays are set to wow spectators. The show starts from the Burj Khalifa, the world's tallest building at 828 meters (905 yards). Already, organizers say the tower has been fitted with 400,000 LED lights and 1.6 tons of fireworks will be used in the display.

From there, fireworks also will light up the sky around the sail-shaped Burj Al Arab and later down near the Dubai Marina. Fireworks also will be on display in Abu Dhabi, the capital of the country of seven emirates.

The fireworks will end a year of challenges for the United Arab Emirates, which saw global oil prices drop below $40 a barrel and dozens of its soldiers killed in the ongoing Saudi-led war against Shiite rebels in Yemen. Meanwhile, the Mideast as a whole still reels from the onslaught of the Islamic State group.

Police in Kenya, which has been repeatedly attacked by al-Shabaab militants based in neighboring Somalia, are urging vigilance as many people prepare to celebrate in hotels and watch midnight fireworks displays. Unauthorized fireworks have been banned as a safety hazard "in view of the elevated threat of terrorism," police said.

"Kenyans should remain vigilant at all times and know that we are facing a real terror threat since the split of al-Shabaab into two groups, one supporting al-Qaida and another Islamic State," Inspector General of Police Joseph Boinnet told The Associated Press. "We are facing a real terror threat because these two groups are struggling to outsmart each other. This therefore is not a time to drop our guard, particularly during this festive season."

The French are still recovering from the Nov. 13 attacks that left 130 people dead in Paris, and authorities are preparing for a possible worst-case scenario on New Year's Eve. About 60,000 police and troops will be deployed across the country on Thursday.

"The same troops who used to be in Mali, Chad, French Guyana or the Central African Republic are now ensuring the protection of French people," said Defense Minister Jean-Yves Le Drian.

Paris has canceled its usual fireworks display and will instead display a 5-minute video performance at the Arc de Triomphe just before midnight, relayed on screens along the Champs Elysée.

In previous years, more than 600,000 French and foreign visitors gathered on the famous avenue for New Year's Eve. This year, it will be closed to vehicles for just one hour instead of the usual three.

Paris mayor Anne Hidalgo said the "noble and decent" show will be aimed at "sending the world the message that Paris is standing, proud of its lifestyle and living together."

The decision came one day after authorities arrested two men in connection with an alleged plot to unleash holiday season attacks against police, soldiers and popular locations in Brussels.

Mayor Yvan Mayeur said it would be impossible to screen the thousands of revelers who would otherwise be gathering in Brussels to ring in the new year.

Rio de Janeiro's main soiree on Copacabana Beach will have dual themes: the 100th anniversary of samba music and the kickoff to the Olympics, which the city will host in August. More than 2 million people are expected on the beaches Thursday.

Police say more officers will be on hand this year than the 1,600 deployed for last year's bash. Capt. Ivan Blaz, spokesman for Rio's police force, told The Associated Press that they have received no reports of terrorism.

The partying will happen at a time when Brazil is mired in crisis. The economy has plunged, the opposition is pushing to impeach President Dilma Rousseff and a host of financial and government scandals have soured Brazilians.

Around 1 million people are expected to converge on New York City's Times Square for the annual celebration. The party begins with musical acts, including Luke Bryan, Charlie Puth, Demi Lovato and Carrie Underwood, and ends with fireworks and the descent of a glittering crystal ball from a rooftop flagpole.

This year's festivities will also be attended by nearly 6,000 New York City police officers, including members of a new specialized counterterrorism unit.

People usually begin filling the square and adjoining blocks before sundown for the televised spectacle. Everyone arriving gets screened for weapons with a metal-detecting wand.

Officials are urging revelers to leave bags, backpacks and strollers at home as police ready for hundreds of thousands of partiers to flood the Las Vegas Strip. It's not a first-of-its-kind request, but it's getting extra emphasis following deadly attacks in Paris and San Bernardino and, more recently, a driver in Las Vegas who witnesses say intentionally plowed into pedestrians, killing one person.

Nearly 1,000 uniformed officers and an undisclosed number of undercover officers will be posted along the popular 4-mile-long, casino-filled corridor.

Schedule below is subject to change, and all times are EST