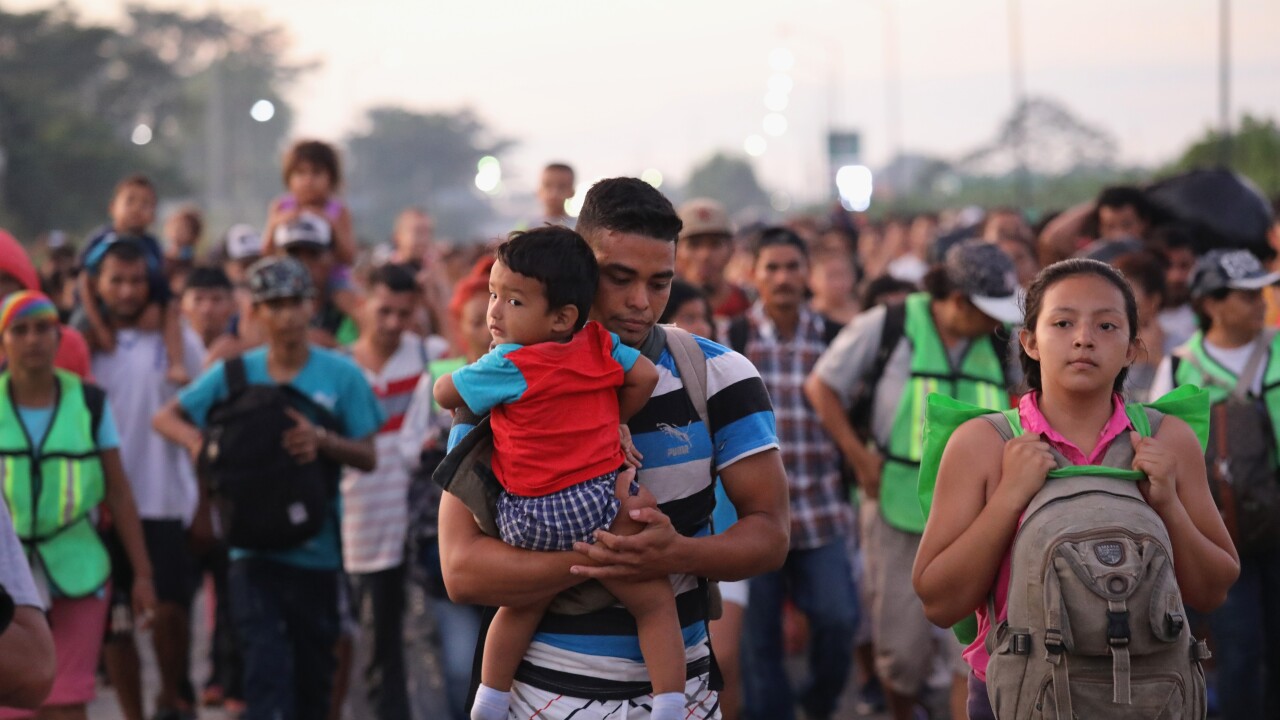 John Moore/Getty Images
CIUDAD HIDALGO, MEXICO - OCTOBER 21: Members of a migrant caravan walk into the interior of Mexico after crossing the Guatemalan border on October 21, 2018 near Ciudad Hidalgo, Mexico The caravan of Central Americans plans to eventually reach the United States. U.S. President Donald Trump has threatened to cancel the recent trade deal with Mexico and withhold aid to Central American countries if the caravan isn't stopped before reaching the U.S. (Photo by John Moore/Getty Images)

MEXICO CITY (AP) — Mexican police, soldiers and National Guard are raiding hotels, buses and trains to round up migrants, creating scenes of weeping Central American mothers piled into police vans along with their children and overflowing detention centers with deplorable conditions.

Such scenes have caused an outcry in the United States, but in Mexico there has been little backlash against the government of President Andrés Manuel López Obrador even though his country has historically had a deep sympathy for the plight of migrants.

This sympathy has been eroded by the migrant caravans of late 2018 and early 2019, which left a bad taste in the mouth of Mexicans and caused deep divisions among pro-migrant groups. López Obrador’s reputation as a popular leftist has also muted the response to the crackdown. Add to this the disruption caused by migrants in Mexican border cities and threats of border closures or tariffs from U.S. President Donald Trump, and it has all led many Mexicans to see the waves of migrants as a problem.

Polls say López Obrador’s approval rating has held steady at 66% to 72% despite the crackdown and reports of brutal conditions at the huge Siglo XXI migrant holding facility on Mexico’s southern border and other centers.

When the first caravan got a warm welcome in October, Mexicans were almost evenly split on whether Mexico should stop migrants from other countries from entering without proper documents, according to an El Universal survey which polled 1,000 people June 3-7 with a margin of error of 3.5 percentage points.

Eight months later, 61.5% supported stopping them and only 33% opposed it, according to the same poll. Even more dramatic was the reversal on giving migrants asylum in Mexico. In October, nearly 48% favored it, while 38% opposed. By June that had flipped, with 57% opposed and 37% favoring.

Even for Mexicans who don’t think Central Americans take jobs from Mexicans or cause increased crime — accusations routinely heard, especially in southern Mexico — there is a sense that too many migrants have come.

“The truth is that it is a problem for everyone. It’s better that they be sent back to their countries,” said Jorge Parada Leon, a Mexico City message delivery worker. “Crossing Mexico the way they do is dangerous, a lot of them have died ... they should fix the problems they have in their home countries.”

Many Mexicans are also angered by the idea that Mexico would contribute money for development aid in Central America.

López Obrador “should focus on the people instead of being compassionate with the migrants who come from other countries,” said Argelia Miranda Vazquez, a government employee. “He should support the (Mexican) people. And the others? Well, let their governments take care of their own people.”

Some have criticized the crackdown. The head of Mexico’s National Immigration Institute, Tonatiuh Guillén, resigned when the crackdown was announced in June to head off Trump’s threat of tariffs on Mexican products. Porfirio Munoz Ledo, the congressional leader of López Obrador’s Morena party, said that “it is morally unacceptable that on one hand we demand they (the U.S.) open the doors for us, but we close them in the faces of Central Americans, in order to do the United States’ dirty work.”

López Obrador acknowledges the crackdown was implemented to avoid U.S. tariffs on Mexican imports threatened by Trump in late May.

“A few days ago we were able to overcome a possible economic and political crisis, by means of an immigration agreement that requires us to be stricter in enforcing immigration laws,” he said. “We have established a relationship of respect and friendship with the people and government of the United States and this has allowed us to avoid confrontation that wouldn’t benefit anyone.”

Even some of the most outspoken defenders of migrants are defending López Obrador’s crackdown on the porous southern border, where migrants from across the world simply wade or ride rafts across rivers marking the border.

Rev. Alejandro Solalinde, who runs a shelter for migrants in the southern Mexico and has fiercely criticized past administrations, said that “someone had to impose order on the border ... everyone was crossing there without the slightest problem.”

Solalinde, who is close to López Obrador, added: “Let’s be clear about this. This isn’t what Andrés Manuel’s administration wanted; it is what it was able to do” in the face of Trump’s threats.

Solalinde blamed a series of four or five immigrant caravans that brought thousands of migrants in 2018 and early 2019 that overwhelmed border cities and wore out an initially warm welcome.

“They were irresponsible in bringing migrants to the northern border and exposing them to risks in such a brutal way. They herded the migrants up to the border and caused a big international problem between the two countries,” Solalinde said.

But Mujica, who was briefly arrested at the start of López Obrador’s crackdown, thinks there was a campaign in the press and on the internet to smear the migrants.

“This was the contribution of the news media,” Mujica said. “For example, when they said the Central Americans are forcing their way in, when in fact they had opened the door to them. Saying they had burned the Mexican flag, or they left garbage behind, or depicting them as ungrateful.”

The activist thinks that in the long run, the crackdown will force migrants into more dangerous routes, and eventually become a political embarrassment for López Obrador.

“This won’t be a definitive political cost for his administration, but it will continue to damage him,” Mujica said. “This situation is going to continue to get worse, and that will mean more kidnappings, more human rights violations, more extortions. This will mean more deaths of migrants ... this is definitely a blow to the credibility he had.”

López Obrador himself has acknowledged that one of his biggest fears is a massacre of migrants like the one in which a drug cartel killed 72 mainly Central American migrants in 2010 in San Fernando, a town in the northern border state of Tamaulipas.

Still, most Mexicans have been willing to overlook the mistakes of the new administration, which took office Dec. 1.

“The president has called for reaching a balance between national security and human security, that is, human rights,” said Solalinde. “I think we are going to find a way to strike the balance.”