Copyright 2018 Scripps Media, Inc. All rights reserved. This material may not be published, broadcast, rewritten, or redistributed.
Ulet Ifansasti
PALU, INDONESIA - OCTOBER 03: Destroyed buildings after the earthquake and tsunami on October 03, 2018 in Palu, Central Sulawesi, Indonesia. The death toll from Fridays earthquake and tsunami has risen to at least 1,347 according to Indonesias disaster response agency as aid supplies are beginning to arrive and survivors are increasingly growing desperate for food, fuel, and water. A tsunami triggered by a magnitude 7.5 earthquake slammed into Indonesia's coastline on the island of Sulawesi as tensions are running high and the police have begun guarding shops against looters while humanitarian relief convoys entering the city are being escorted by soldiers and police. (Photo by Ulet Ifansasti/Getty Images)
By: ABC News
Posted at 4:07 PM, Oct 03, 2018

The powerful earthquake and tsunami that devastated an Indonesian island last week has left more than 1,400 people dead, according to the country's national disaster agency.

The official death toll from the twin disasters, which climbed to 1,407 on Wednesday, was expected to rise further as rescue crews continue searching for people trapped beneath the wreckage of collapsed buildings on Sulawesi, a large island east of Borneo. Thousands of people were injured and some 70,000 were displaced from their homes, said Sutopo Purwo Nugroho, a spokesman for Indonesia's National Agency for Disaster Countermeasure.

Still, the damage to the region's roads and infrastructure has made it difficult to deliver much-needed humanitarian relief and supplies to survivors in hard-hit areas.

"Moving around the streets the destruction is everywhere," said Zubedy Koteng, child protection adviser for Save the Children Indonesia, who is in Palu, one of the worst-hit cities. "It’s hard to recognize where some buildings once stood, such is the scale of damage. Reaching communities in Sulawesi is really challenging due to its remoteness coupled with the devastation that the tsunami has wrecked, cutting off transport links, which makes children separated from their families even more vulnerable." 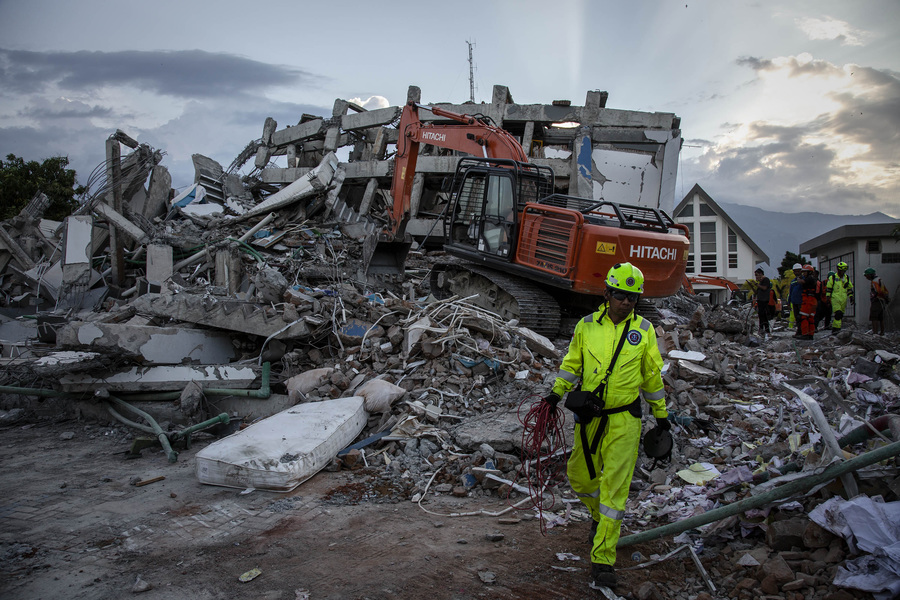 Hundreds of children were among the dead and another 46,000 are in urgent need of humanitarian assistance, according to Save the Children Indonesia.

"I’m particularly worried about children who’ve been separated from their families or are now orphans because their parents have lost their lives in this tragedy," Koteng said. "Many of these children are sleeping on the streets because they simply have nowhere to go. It’s hard to imagine a more frightening situation for a child."

On Monday, the bodies of at least 34 children were discovered by Indonesian Red Cross officials inside a church that was buried by a landslide in a remote northern region of Sulawesi.

A 7.5 magnitude earthquake struck Central Sulawesi at a relatively shallow depth of 10 kilometers last Friday and triggered a tsunami that slammed into Palu, with waves as high as 20 feet that flooded the coastal city and swept away homes and buildings.

On Wednesday, a volcano erupted on another part of the same island some 585 miles northeast of the quake zone, spitting volcanic ash thousands of feet into the sky.

Earthquakes, tsunamis and volcanic eruptions are common in Indonesia, which is situated on the Pacific Ring of Fire, a seismically-active hot spot encircling the Pacific Ocean. In late 2004, a magnitude 9.1 earthquake off the island of Sumatra triggered a tsunami that killed hundreds of thousands of people in various nations around the Indian Ocean.