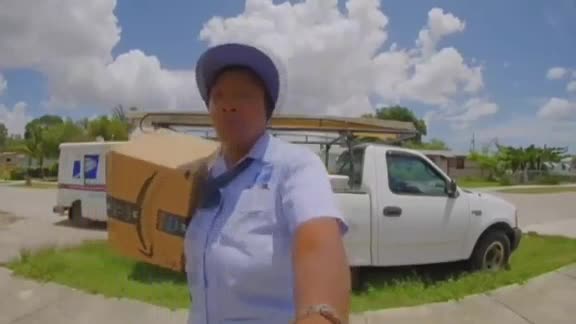 A post office worker was caught throwing packages over the fence, breaking its contents.

FLORIDA CITY, Fla.-- A U.S. postal worker was caught on camera throwing a family's Amazon packages at their front door Tuesday afternoon, not once, but twice.

"The mail lady throw away the package like she was playing baseball," Andres Gonzalez said.

Inside, one... a diaper dispenser. Cracked and broken.

"We've got a baby on the way so we expect some stuff from Amazon," Gonzalez said.

The postal service, stopped by Gonzalez's home Thursday to apologize.

The postmaster also issued a statement which read, in part: "Our employees take great pride in their work, delivering for the American public. This is clearly unacceptable behavior that does not reflect the efforts of the thousands of professional, dedicated carriers in our workforce."

Gonzalez says he doesn't want the woman reprimanded or fired. He just wants his packages delivered a bit more carefully. "What I would really like is they they told her to don't do it again because I don't want nobody to lose their job because everyone has a family."

The family says Amazon gave them a full refund and will be replacing the broken diaper dispenser.