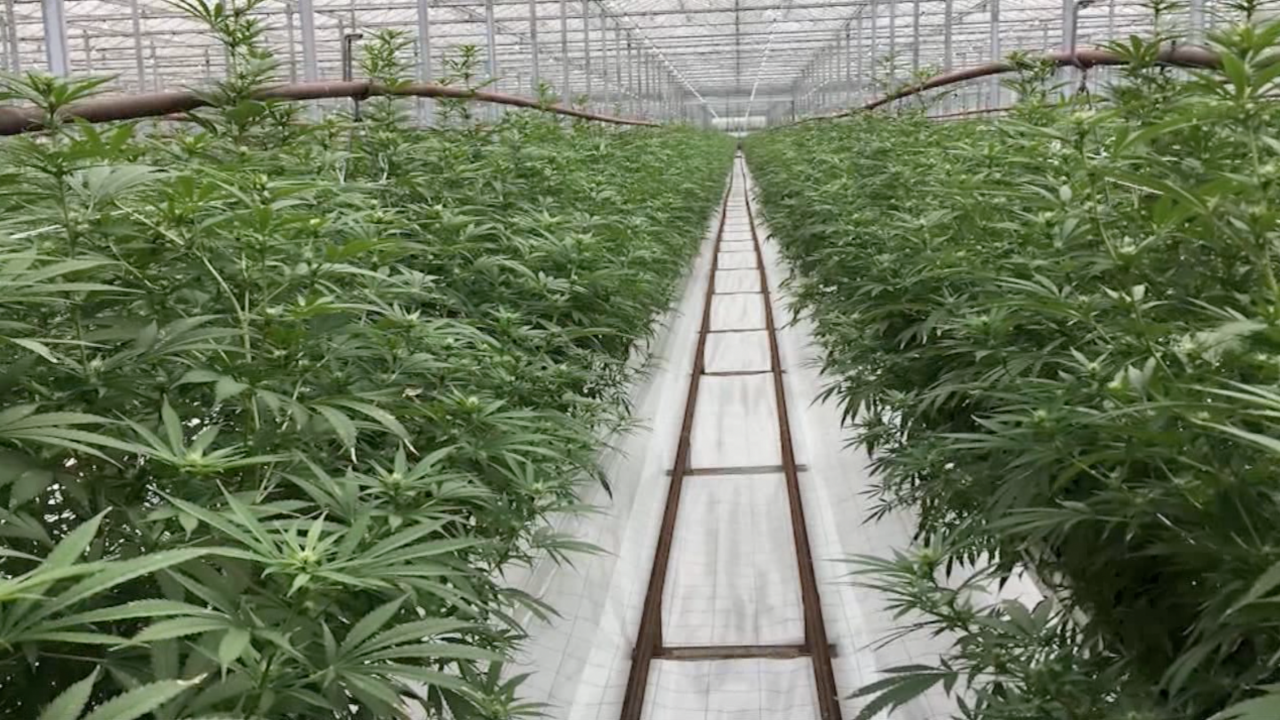 FORT LAUDERDALE, Fla. (AP) — Customers are raving about the new slices at Pizza City in Fort Lauderdale — especially the marinara sauce, which is infused with cannabidiol, aka CBD oil, the trendy but controversial compound commonly found in marijuana.

At Foxworth Fountain in Delray Beach you can order ice-cream floats, sundaes and milkshakes speared with syringes of CBD oil. Three weeks ago at Colada, a cafe north of downtown Fort Lauderdale, employees began spiking shots of Cuban cafecito with the oil.

South Florida restaurants are buzzing over CBD in recent months, touting the oil’s ability to treat everything from chronic pain to anxiety.

Here’s the problem: Some CBD-laced foods contain trace amounts of THC (tetrahydrocannabinol), the psychoactive substance in marijuana that produces a euphoric high. THC is illegal in Florida for those without a medical marijuana card.

″(CBD oil in restaurants) is dangerous to consumers,” says Hyman, a business consultant at the law firm. “You don’t know where the oil is coming from. The FDA clearly states that it’s unlawful to introduce CBD into food or dietary supplements. Period, end of story. What these restaurants are doing is a marketing ploy.”

The FDA declared CBD products illegal as a food additive in a Dec. 20 statement after President Trump signed into law a big farm bill that reclassifies hemp — which is cannabis containing 0.3 percent or less THC — from a narcotic to an agricultural product. The bill effectively legalizes hemp, with one big caveat: Hemp-derived oils, such as CBD, must first pass FDA approval.

Regardless, CBD oil has gained a foothold in Florida, where it’s widely available at markets and vape shops in glass bottles and bath bombs, dog treats and gummies.

Also complicating matters: CBD’s dubious health benefits. While detractors compare it to over-hyped snake oil, proponents describe CBD as a salve, treating ailments as wide-ranging as acne and cancer. So far Epidiolex, used to treat seizures, is the only CBD-laced pharmaceutical on the market approved by the FDA.

Because of the current government shutdown, attempts to contact an FDA spokesman this week were unsuccessful.

“Selling unapproved products with unsubstantiated therapeutic claims is not only a violation of the law, but also can put patients at risk, as these products have not been proven to be safe or effective,” FDA commissioner Scott Gottlieb wrote in the statement. “Cannabis and cannabis-derived products ( . . . ) are considered new drugs or new animal drugs and must go through the FDA drug approval process for human or animal use before they are marketed in the U.S.”

That hasn’t stopped Dave Nardi, the owner of Pizza City, from infusing his New York-style pies with CBD. Pot-leaf cartoons and the phrase “CBD infusion” decorate the windows of his Las Olas Boulevard pizzeria.

In October, Nardi says a Hollywood-based CBD supplier, Third Day Collective, approached him with the idea to lace his pizzeria’s products with CBD oil. He started with fruit smoothies, and in early December debuted CBD pizza, his marinara sauce loaded with about 100 milligrams of CBD oil.

Customers have told him it’s a hit, Nardi says, but admits he’s been peppered with questions about CBD and its health benefits.

“Mostly I’ve been getting, ‘Will this pizza get you high?’ and of course the answer is ‘no,’ ” Nardi says. “I tell customers that the (CBD) flavor is as mild as extra virgin olive oil. People are telling me they’re happy that, finally, Las Olas is becoming more progressive. But I’m still getting lots of people who don’t know what CBD is.”

Nardi says he didn’t contact the FDA for permission to serve CBD pizza. It wasn’t necessary, adds Rafael Alvarez, whose company Third Day Collective extracts CBD from hemp grown on a farm “somewhere in Oregon,” he says. Moreover, his strain of oil contains about .3 percent THC, which Alvarez says is “within the legal limit allowed by law.”

“We didn’t have to inform the FDA before we served this pizza. (Hemp) is not illegal,” says Alvarez, adding that his oil was tested for impurities at a Davie-based laboratory called EVIO Labs. “I’ve read the (new farm bill) in depth, and it’s clear. The FDA is trying to regulate this so people don’t get high on accident. Our CBD is as pure and clean and organic as a cannabis plant can be.”

Still, Nardi says, he only sells CBD pizza to customers 21 and older, and wouldn’t recommend pizza-lovers try it before a job interview.

“If you have to take a drug test, although it’s on a micro-level, you may test positive for THC,” Nardi says.

There are trace amounts of THC — about 0.3 percent — in the milkshakes and sundaes at Foxworth Fountain in Delray Beach, chef and co-owner Rhyan Dildine says. Dildine’s soda fountain opened in March, sharing space with Delray Shores Pharmacy, which her father-in-law started in 1975.

Served on Foxworth’s 21-and-older “adulting menu,” which also offers craft-beer milkshakes, sweet treats include CBD’s Nuts, a sundae topped with organic almonds, peanuts and CBD-infused whipped cream, plus a drizzling of more CBD oil; and Daddy, Chill Out, a milkshake in a fudge-lined glass with a 25-milligram syringe of mint chocolate chip-flavored CBD oil.

“I’m a true believer in CBD,” says Dildine, whose husband is the owner-pharmacist at Delray Shores Pharmacy. “There’s a woman who comes here three times a week with a lot of pain from cancer. She gets a root-beer float with three doses of CBD oil, and she’s as happy as a clam.”

Florida voters legalized medical marijuana use in Florida in 2016 for those with a medical marijuana prescription card, but recreational marijuana is still illegal. Hyman says the disconnect for local restaurants about the legality of CBD oil boils down to a “misinterpretation of the law.”

“People thought (the farm bill) would open the floodgates for legalizing CBD,” Hyman says. “But the FDA still requires approval.”

Hyman suspects enforcement of CBD oils will fall to local agencies. “Does the FDA have funding to come down here and try CBD on a pizza?,” he says. “No, they’ll go after bigger fish.”

“As it was described to me by one of our detectives, CBD oil alone is not illegal in the state of Florida. That is, unless the product contains THC,” Liening says. “If THC is suspected, we, the Police Department, must be made aware in order to begin an investigation.”

In mid-December, Colada founder Alex Recio hopped on the CBD oil bandwagon with CBD coffee, seizing on the interests of the “health-conscious young clientele” living in the Flagler Village high-rises behind his hipster-friendly coffeehouse. Colada doses its coffee with CBD like a shot of espresso, squeezing 30-milligram drops into fresh-poured java.

“That’s was my first question before doing this: ‘Doesn’t CBD oil defeat the purpose of coffee?’ ” Recio says. “But I’ve had customers say the coffee makes them jittery but the oil mellows them out. There’s no THC in it whatsoever. It’s completely legal.”

Miami baker Courtney Kohout started selling CBD-infused organic vegan cookies in September through her namesake cookie company, Courtney’s Cookies, which distributes to shops in Miami and Fort Lauderdale. Her offerings: the Chill Out, a vanilla-flavored cookie with 25 milligrams of CBD oil, and Nighty Night, a 50-milligram cookie with 3 milligrams of melatonin, a sleep supplement.

“You’ll start feeling a bit sleepy after 20 to 30 minutes,” Kohout says. “It’s all organic, gluten-free and no corn syrup. We’re doing this for health. It’s a preventative measure.”

“A customer here told me he ordered CBD pizza and a CBD smoothie at the same time,” Murray says. “I really, really hope he didn’t have any errands to run that day.”