Department "not gonna tolerate this... behavior" 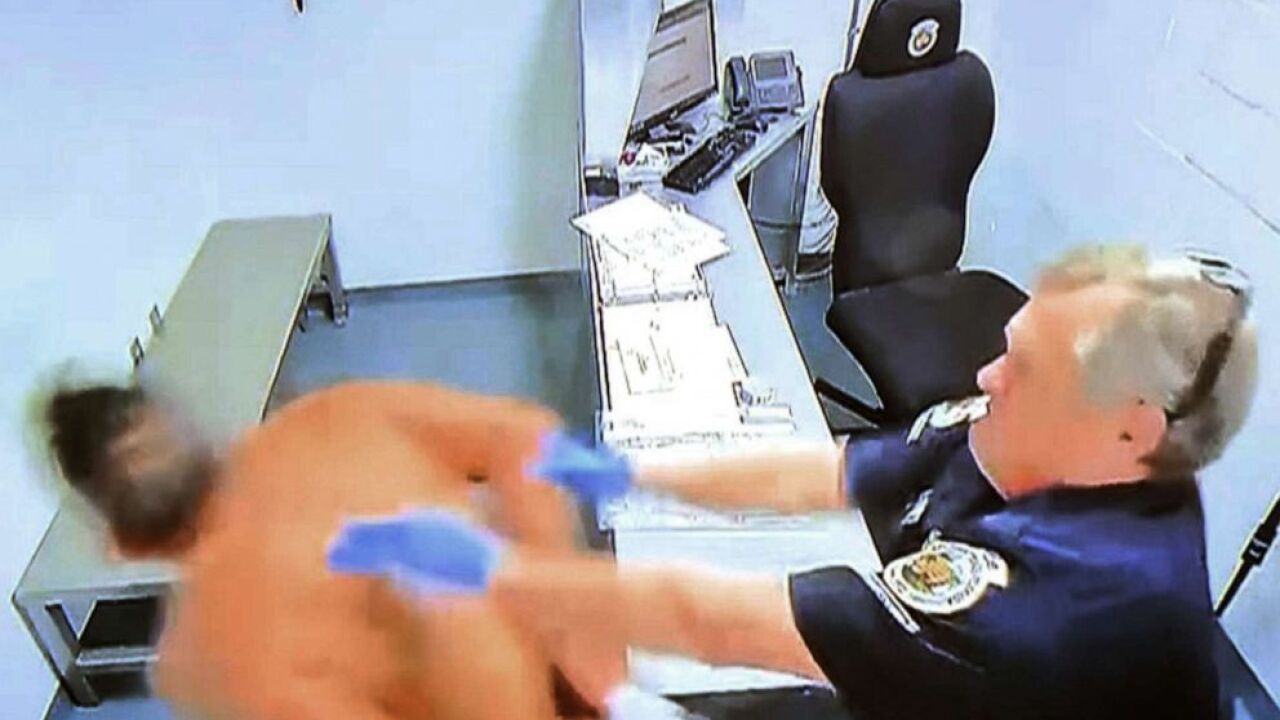 A Miami-area officer has been charged with felony battery and official misconduct after video showed him pushing an inmate head-first into a concrete wall, after which he allegedly lied about the incident in his report.

Surveillance video taken at the Homestead Police Department shows officer Lester Brown, 51, using two hands to forcibly shove the inmate, Jose Garcia, into the opposite wall as soon as he is led into the booking room.

Garcia had been arrested in the early morning hours of Dec. 1 for disorderly intoxication and resisting arrest without violence, both misdemeanors, Miami-Dade State Attorney Katherine Fernandez Rundle told reporters at a news conference Wednesday afternoon.

In the video, a shirtless, handcuffed Garcia was led into the station by the arresting officers before Brown took hold of him without incident, the arresting officers trailing behind them as they walked into the booking room. Within seconds, Brown pushes Garcia, who hits the head on the wall and falls to the ground, blood trickling down the left side of his face and onto his torso.

The on-call supervisor shift commander was notified within minutes of the incident occurring, Rundle said, and Homestead Police Chief Alexander Rolle Jr.'s office and Rundle's office were alerted soon after that.

In the incident report, Brown allegedly wrote that he "heard a commotion" as the arresting officers led Garcia into the station, and that when he left the booking room, he found a "combative subject," Rundle said.

Brown allegedly wrote that as he led Garcia into the booking room, Garcia "pushed back" and "started to turn his head in [an] attempt to attack the officers," Rundle said. Brown also allegedly wrote that Garcia fell forward as the two were pushing up against each other, causing his head to hit the wall.

The investigation and surveillance video contradicts Brown's statement of events from that night, Rundle said, adding that there is "no question" that Brown's actions "resulted in the injury of Mr. Garcia."

Brown was arrested Wednesday morning and was later released on $10,000 bail, Rundle said. He did not immediately respond to ABC News' request for comment.

Brown’s defense attorney, C. Michael Cornely, told the Miami Herald that his client was justified in pushing the inmate because the man was drunk, unruly and appeared to be about to attack. “From the get-go, he was uncooperative,” Cornely told the Herald. “I think the case is totally overcharged.”

The force Brown allegedly used to push Garcia was the reason behind the felony battery charge, Rundle said. Both charges against Brown are third-degree felonies, Rundle said.

Brown is a reserve officer but was acting as a receiving correction officer, Rundle said. He has been relieved of duty without pay pending termination, Rolle told reporters.

Rolle condemned Brown's alleged actions, stating that the department is "not gonna tolerate this kind of behavior."

"I've been here 21 years as police chief, and we have our integrity with our police department, and we're not gonna stand for any abuse of our citizens in our community," he said.

When asked whether the department has experienced problems with Brown before, Rolle answered "yes," but would not elaborate on what those issues were.

Rundle described Brown's alleged actions as "abhorrent," stating that it "evaporates" the "great work" that's been done to foster a good relationship between Homestead police and the community.

Garcia is a migrant worker and is about 50 years old, Rundle said, adding that the reason why the investigation took so long is because authorities couldn't immediately find him.

He was not convicted of the charges against him, Rundle said, adding that she believed the charges were dropped by could not confirm that they were.