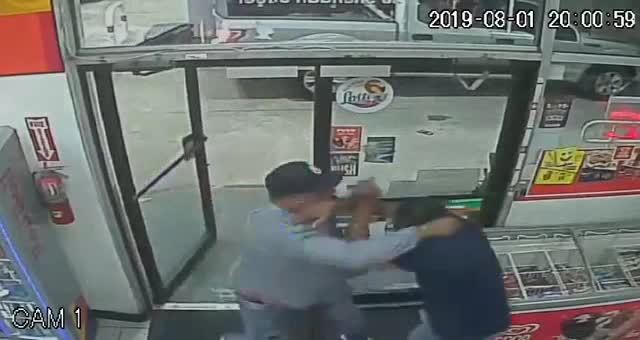 Hollywood, Florida, police are looking for the man.

No beer for you!

A man who was denied the sale of alcohol trashed a Hollywood, Florida, convenience store and battered the clerk.

The incident happened on Aug. 1, when two men entered the Exxon gas station and attempted to buy alcohol. Believing the two were already intoxicated, the clerk refused to sell them more.

That's when one of the suspects starts to vandalize the store, causing more than $1,000 in damages.

After knocking over all manner of merchandise, the suspect exits the store and gets in a pickup truck and the victim goes to the door to try to get a license plate.

The suspect then jumps out of the truck, forces his way in and begins to punch the victim.

The suspect vehicle was a newer model silver Ford F-150 with a paper tag. A sticker on the passenger door says “Sonia’s Roofing” and a large sticker on the rear window shows a phone number starting with 786.

Detectives are asking anyone who may have information on these suspects to call the Hollywood Police Department at 954- 764-4357(HELP) or 954-967-4411. Tipsters can e-mail or text to hollywoodpdtips@hollywoodfl.org. Information can also be given to Broward Crime Stoppers at 954-493-8477(TIPS) or www.browardcrimestoppers.org.

This article was originally published by WPTV.