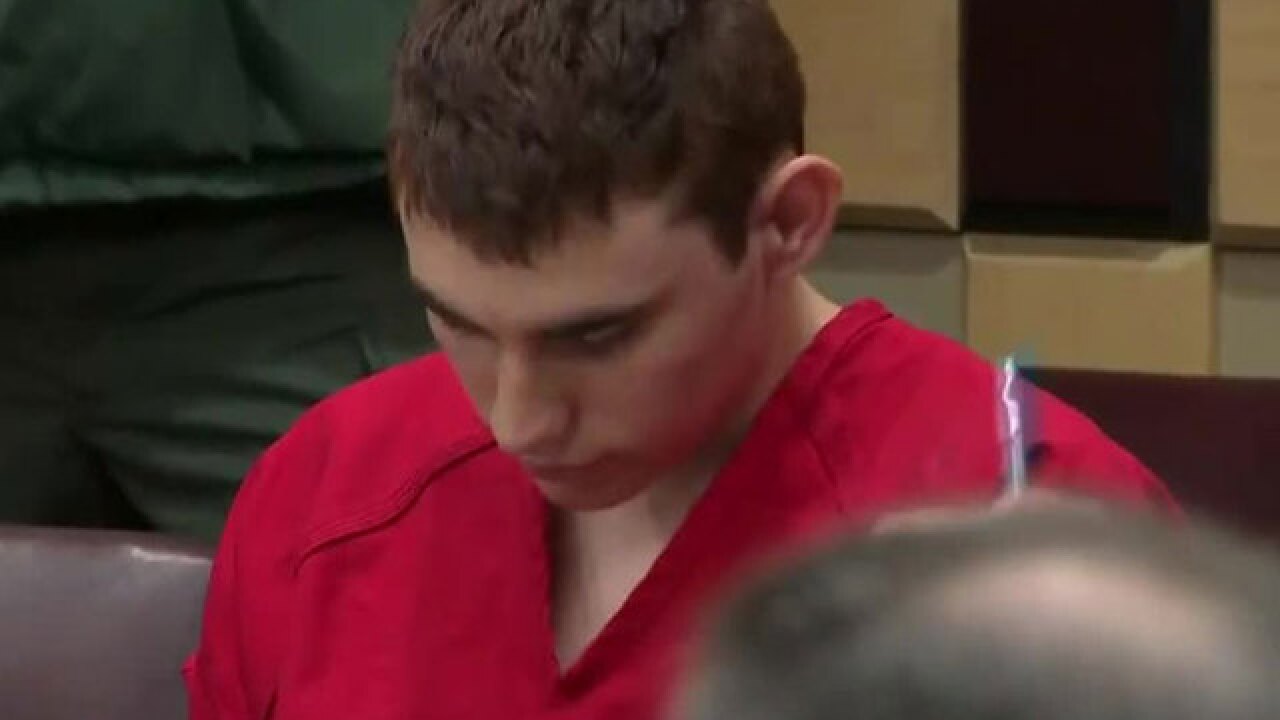 PARKLAND, Fla. (AP) — A Tuesday morning hearing in the criminal case against the suspect accused in the Florida high school shooting has been canceled.

Prosecutors are seeking to obtain hair samples, fingerprints, DNA and photographs of Nikolas Cruz, 19. The hearing was removed from the court docket and no explanation was immediately available.

Cruz, who has been charged with 17 counts of murder, was not expected to appear in court because he waived his right to attend the hearing. He is being held without bail at the Broward County Jail.

In a separate court matter, Cruz’s lawyers are seeking to disqualify a judge from presiding over the case. The defense says in court papers that Circuit Court Judge Elizabeth Scherer is biased in favor of prosecutors, threatening Cruz’s right to a fair trial.

Cruz signed an affidavit in a barely legible printed scrawl that resembled the writing of a young child.

As the case moves through the courts, it has fueled a debate over gun control in the halls of the Florida Capitol in Tallahassee, hours from where the shooting took place at Marjory Stoneman Douglas High School in Parkland.

On Monday, a state Senate committee approved a bill Monday to raise the age for buying a gun from 18 to 21 and imposing a three-day waiting period for all gun purchases. The bill would also allow teachers to carry guns in schools if their school district approves and the teachers undergo law enforcement training and are deputized by the local sheriff’s office.

About 300 gun safety advocates packed the room and dozens pleaded with senators to include an assault weapons ban in the bill. That idea was rejected on a 6-7 vote.

A similar House bill was going to be considered by a committee Tuesday.

Students are scheduled to return to school Wednesday, for the first time since the Feb. 14 shooting.

Broward Schools Superintendent Robert Runcie told the Sun Sentinel that the district’s hands were tied by federal law after Cruz turned 18 and refused to let the school system continue providing him with crucial mental health and other services.

“You can’t make someone do something when the law says they have the right to make that determination,” Runcie told the newspaper.

Cruz was transferred to a school with programs for emotionally and disabled students when he was in eighth grade but wanted to be mainstreamed back into his home school, Runcie said.

“He often perseverates on the idea that his current school is for students that are ‘not smart’ and that he can now handle being in ‘regular’ school,” according to a Broward school system report from June 2015, the end of his ninth-grade year.

Starting in January 2016, Cruz was allowed to spend half his day at the alternative school and half at Stoneman Douglas to ease him into the less-structured environment.

In August 2016, he started back to Stoneman Douglas, but “the situation had deteriorated” by November, Runcie said. That’s when Cruz, who had turned 18 in September 2016, refused the mental health services offered by the school. Runcie said Cruz had the support of his mother.

He remained at the school until February 2017, when school officials finally decided to remove him after unspecified behavior issues. He was told his only option was an alternative school.

Runcie said he would like to see the aged raised to 21 for students to be allowed to refuse such services.

“The Legislature has just proposed raising the legal age by which you could purchase firearms to 21. Maybe 21 should also be the age they can refuse services,” he told the newspaper.

In Tallahassee, the Florida House is expected to subpoena records from Broward County Sheriff Scott Israel and several agencies that interacted with Cruz. Florida Gov. Rick Scott’s office has asked the Florida Department of Law Enforcement to investigate the police response, and the agency confirmed it would begin the probe immediately.

Also Monday, the attorney for the sheriff’s deputy assigned to guard the high school said that his client never entered the building to confront the suspect because he believed the gunfire was coming from outside.

Scot Peterson has been called a coward and worse for failing to stop the massacre. The criticism intensified as President Donald Trump blasted the deputy and other officers who were there, saying they “weren’t exactly Medal of Honor winners.”

Peterson’s attorney issued his first public statement about the attack, saying it was “patently untrue” that the deputy failed to meet sheriff’s department standards or acted with cowardice at the scene of the Feb. 14 assault. He resigned after Broward County Sheriff Scott Israel said he felt sick to his stomach over his deputy’s failure to intervene.