A Chinese man with stage 4 cancer and his wife were detained on Monday after the Carnival cruise they were on docked at a port in Florida, according to the couple's family.

After Cui had his stomach removed and endured up to eight rounds of chemotherapy, McDevitt and his wife had invited her parents to come stay with them in the U.S. so the dying grandfather could get to know his grandchildren during his final months, McDevitt said. 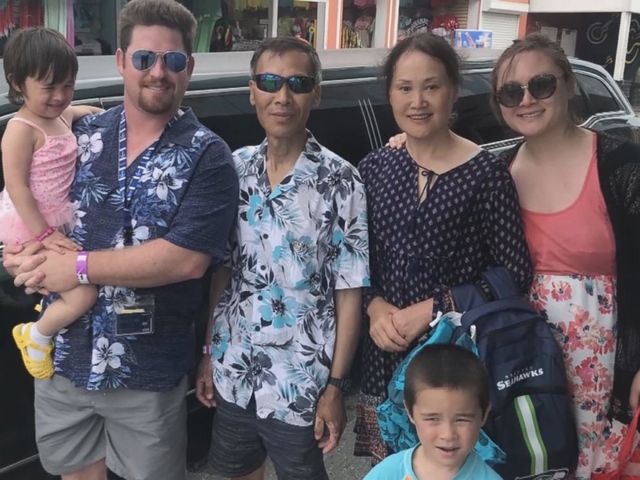 The family, who are from the Ozarks region of Missouri, had an "awesome" time on their cruise aboard the Carnival Elation, which departed Jacksonville, Florida, on Thursday and returned on Monday after traveling to the Bahamas, McDevitt said.

But, in hindsight, McDevitt realized there were some red flags, he said.

When they first got on the boat, there was an "issue" with the family's paperwork, but they were finally allowed to board after about an hour, with the attendant ensuring them that "if there were any problems, they would fix them en route," McDevitt said.

Then, during the trip, McDevitt was called up to the front desks a total of four times to show cruise personnel their paperwork, he said, adding that Carnival employees "knew something" was wrong.

"They should have never let us on the boat," McDevitt said. "I would have rather lost my money on a cruise than my family."

Once the cruise docked in Jacksonville on Monday, the family was the first off the boat after they were deemed "persons of interest," McDevitt said.

They brought the family to the front, fingerprinted his wife's parents, separated the family, and threatened to arrest them, he said.

McDevitt's children, ages 3 and 4, remained with his wife, while he and his wife's parents were placed in separate rooms. McDevitt then requested to be released because he "was being detained for no reason," and called an attorney once he got out.

"Eventually, my wife was released, and my kids, and we never saw her parents again," he said.

Since then, the family has been holed up in a Florida hotel room for two days as they try to figure out what happened to his wife's parents, McDevitt said. They have had no indication of what happened to them since they last saw them on Monday, he said.

McDevitt, a U.S. citizen, is a business owner and active duty member of the Army National Guard, ABC affiliate station WJXX in Jacksonville reported. His wife gained citizenship through marriage.

His wife's parents did not have any money or keys to their home in China when they were detained, McDevitt told WJXX.

The family's immigration attorney, Susan Pai, described the couple's detention as "illegal" in a letter sent to federal officials, according to WJXX. Pai said that the couple "did not voluntarily or knowingly withdraw their application for admission under their ten-year B1/B2 visas" and said they were forced to sign a paper with contents unknown to them because they only understand Chinese, WJXX reported.

Pai hypothesized that the recent green card applications filed by Wang and Cui were invalidated when they left the country on the cruise, according to WJXX. But the valid travel visa should have guaranteed the couple's return, she told the station.

Officials told McDevitt that Carnival would pay for his in-laws' plane ticket back to China, according to WJXX. Both Cui and Wang are in their 60s, WJXX reported.

A spokesperson for Carnival Cruise Line did not immediately return ABC News' request for comment.

In a statement, a spokesman for U.S. Customs and Border Control said the agency "welcomes more than a million passengers arriving in the United States every day," and that border patrol officers are "charged with enforcing not only immigration and customs laws" but also enforcing more than 400 laws from 40 other agencies.

"Under U.S. immigration law [Section 291 of the INA [8 USC 1361] applicants for admission bear the burden of proof to establish that they are clearly eligible to enter the United States," the statement read. "In order to demonstrate that they are admissible, the applicant must overcome ALL grounds of inadmissibility."

The statement did not comment specifically on the couple's case.