A Tampa high school almost lost their yearbook until a group of kids stepped in.

Chamberlain High School almost didn’t have a yearbook until a group of students from two other schools offered their help.

Students from Newsome and Strawberry Crest High Schools found out last week that kids at Chamberlain would not have a yearbook after their advisor left.

“It’s not really possible to not have a yearbook,” said Strawberry Crest senior Anna Benvenuti.

Benvenuti helped lead the charge by getting almost a dozen students from two other high schools to go to Chamberlain late last week and create a yearbook in one day.

“I never would have thought we could pull that off,” she said.

The students didn’t have much to work with so they took photos, went and interviewed students, and put together dozens of spreadsheets to make a yearbook with over 100 pages.

For her, it would be her last yearbook.

That is until Chamberlain needed help, “they were like amazed that we were helping them through this entire thing,” she said.

Chamberlain should have their yearbook printed in time by the end of the school year, and students at Strawberry Crest hope it’s enough time to push advertising and selling the books. 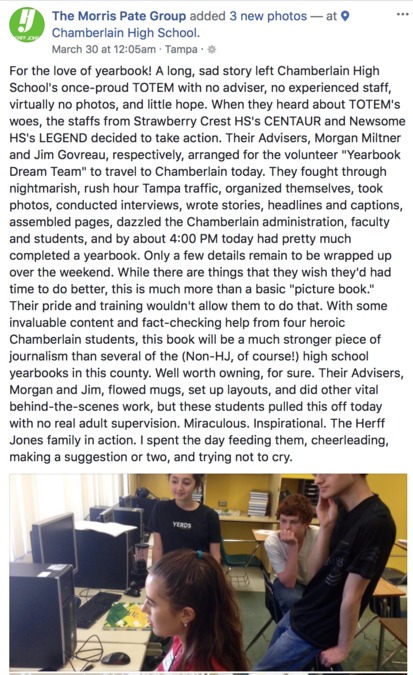 The Morris Pate Group shared this Facebook post about how inspiring the kids were — and how they pulled this off with almost no adult supervision.