TAMPA, Fla. — Thousands of students marched throughout Tampa Bay as part of the March for Our Lives movement on Saturday.

RELATED: March for Our Lives: Students hold events in support of gun control across US

The March for Our Lives movement took over the streets of Washington D.C. and several local areas — one of them being Curtis Hixon Park. 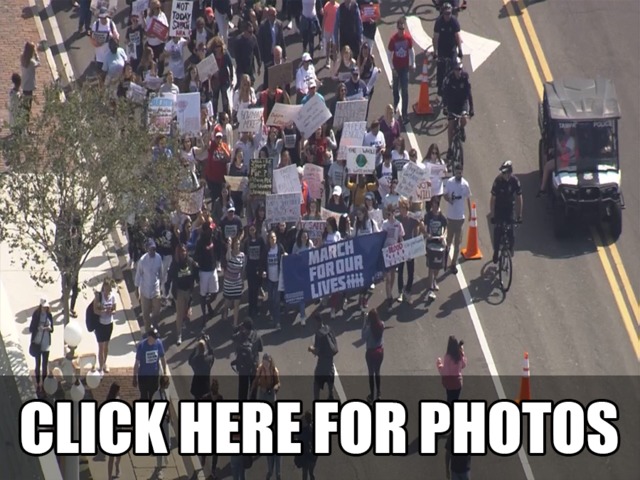 “We shouldn't have to fight with and scream with our elected officials for them to support our lives over guns,” Bella Cruz-O’Grady, a student, said.

There has been a noticeable movement since February 14 when a gunman killed 17 people at Stoneman Douglas High School in Parkland, FL.

RELATED: Florida school shooting marks one of the deadliest in US history

“Gun violence effects us all despite our backgrounds. As students, I think we’ve been silenced for so long by just an inactive government that has not been listening to our demands,” Macie Lavender, a student, said.

"I’m tired of the NRA and corporations running our country. We are the people. We run our country," said grandparent Mary Badham.

A Stoneman Douglas High School Survivor shared her story with the crowd.

"Everybody just froze we had no idea what was going on. Now it’s quiet but loud at the same time like you feel the tension in the air. When you’re walking by the freshman building it's closed off but you know why it’s closed off. You feel it," said Susana Matta Valdivieso, Stoneman Douglas High School Survivor.

Organizers said Saturday's march was a nonpartisan event and their ultimate goal is getting assault rifles banned.

“Right now we are pushing for smaller changes that we feel are nonpartisan that we can all come to a compromise upon,” student Brooke Shapiro said.

March for Our Lives Tampa Bay said students from more than 50 schools in Hillsborough, Pinellas, and Pasco counties took part of Saturday's march.

"People question what we’re doing. They don’t see a purpose in it but if you look back through history every protest of this type ends up being on the right side of history," said Sam Scarf, Plant High School Junior.

“We are marching Saturday to keep the conversation about gun violence alive because the moment we let people forget about what has happened we return to silence and lose the fight,” Parisa Akbarpour, a student, said.

The events throughout the Tampa Bay area included:

RECOMMENDED: Obamas: Parkland students 'helped awaken the conscience' of US on gun violence

“I can sympathize with them. I understand where they’re coming from. They’re frustrated . They’re tired of going to school and feeling like they’re always under that pressure that something could happen to them, but that’s where we have to look at school safety and the things that we can do to secure our schools to make our children feel safer,” said Paul Schaller, a former gun shop owner eho does not believe the solution is gun control. “I really wish the kids would concentrate more on school safety, school issues. Gun control is such a small part of it and if you take a look back in history and you try to use control to take care of the problem that’s not the solution.”

“If the teachers feel like that’s what they want to do and they pass the background checks and everything, they should be allowed to,” Schaller said.