St. Pete Police are investigating a video showing officers using force on an alleged suspect and using a taser on him while he was on the ground.

ST. PETERSBURG, Fla. — St. Pete Police are investigating a video showing officers using force on an alleged suspect and using a taser on him while he was on the ground.

The video was recorded on Friday night and has been shared thousands of times on Facebook.

Daphnie Odom recorded the video once the man was already on the ground as three officers surrounded him.

Police tell ABC Action News that officers responded to a service call for a vehicle left running at the gas station of 34th Street South. A spokesperson for the department says when they arrived they saw the man slumped over the steering wheel, passed out.

Officers reportedly woke the man up to ask for identification, but the suspect handed him a different drivers license.

Police identified the man as Lamonte Stephens from St. Petersburg.

While Stephens is on the ground, the video shows officers deploy a taser on him and one officer can be seen throwing a punch towards the man.

He is heard screaming for help and shouting "I wasn't driving."

A spokesperson for SPPD says Stephens was resisting arrest and was warned twice that he would be tased if he did not comply.

Police released a photo of Stephens in the back of the police cruiser after the altercation that was caught on video. Police say it shows Stephens did not suffer any injuries to his face. They also released a picture of stolen property they say they found inside the vehicle he was in. 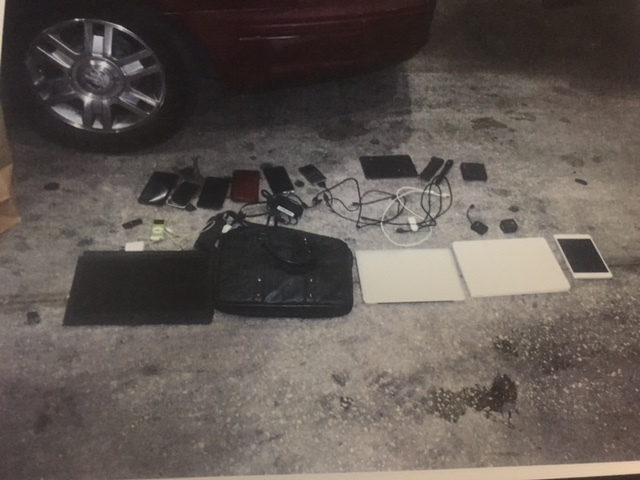 He was arrested on several charges including resisting an officer, burglary and possession of marijuana.

Odom, the woman recording the video, says she wishes she hit record sooner because it appeared Stephens was cooperating with police until an officer snatched him by his arm.

it was hard for her not to help him while screaming, "getting excessive and taking someone who is already on the ground, it kind of just becomes inhumane," she said.

"When did we start treating humans like this," she asked.

The NAACP plans to conduct an independent use of force investigation.

The officers will remain on duty during the police department's investigation.