Parkland parents in St. Pete fighting to get assault weapon ban on ballot

Parkland parents are desperate for change, this time taking their fight for school safety to St. Petersburg. A busload of Marjory Stoneman Douglas parents and teachers spent the day on U.S.F.'s St. Pete’s campus Tuesday urging the Constitution Review Committee to put a ban on assault rifles on the November 2018 ballot.

ST. PETERSBURG, Fla. — Parkland parents are desperate for change, this time taking their fight for school safety to St. Petersburg.

A busload of Marjory Stoneman Douglas parents and teachers spent the day on U.S.F.'s St. Pete’s campus Tuesday urging the Constitution Review Committee to put a ban on assault rifles on the November 2018 ballot.

The ban would prohibit the sale or transfer of assault weapons. Senate Democratic Leader Chris Smith filed an amendment Monday with the Constitution Revision Commission which, if the voters agree, would ban assault weapons across Florida.

Pam Scopino was one of several parents in St. Pete pushing for the ballot measure. Her 15-year-old son survived the mass shooting, but it’ll haunt him forever, she says.

"He has nightmares. He hears gunshots when he sleeps. He doesn’t want to go to school and he doesn’t feel safe," Scopino explained pushing back tears.

Scopino says that's why she is fighting for change. She wants her son and daughter, and thousands of kids just like them, to never have to worry.

“I had students who were throwing themselves literally over the fence and also trying to jump into the canal to get away," she said, exasperated.

The Parkland parents and teachers believe a ban on assault weapons could have saved 17 lives. Now, they’re hoping the Constitution Review Committee, which meets every 20 years,  could step in where legislators left off. 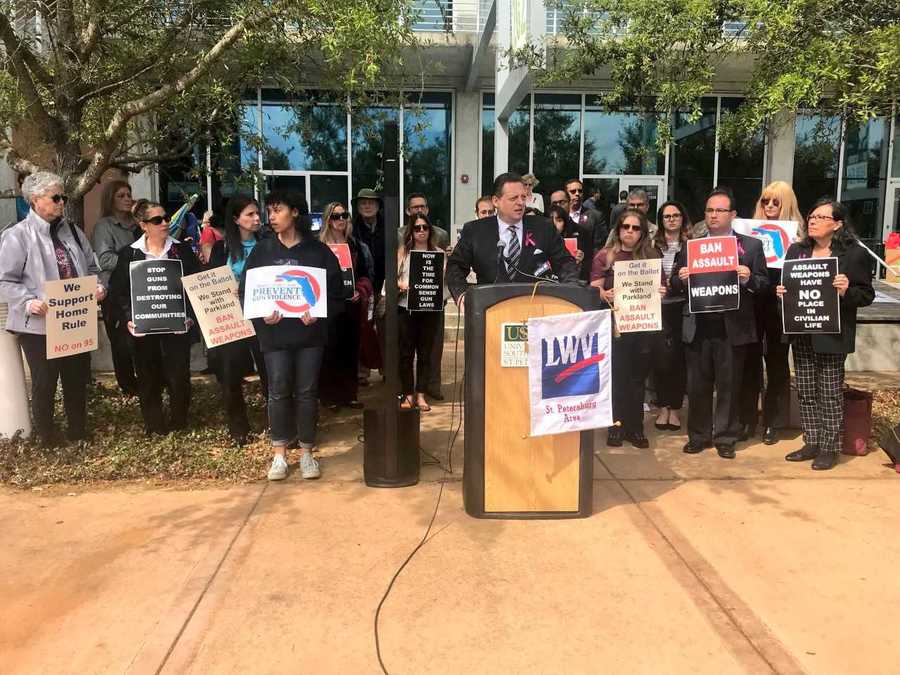 First, the Constitution Review Committee has to put the assault weapon ban on the ballot. Then, if 60% of voters approve it this November, guns like the AR-15 used in the Parkland shooting, would be illegal to sell and transfer.

John Willis, another Parkland father attending Tuesday's hearing explained they're not fighting to ban all guns, just "weapons of mass destruction", as he calls them.

“We and our kids are not asking to do away with the second amendment. We're not asking to take away guns or anybody's ability to hunt. What we're saying is these weapons that do nothing but tear human beings apart, and which killed our kids, teachers and coaches do not belong in civilian hands,” Willis said.

Parkland parents say for their kids, that would be life-changing.

“They will be safe in school, we’re going to make sure they are," Scopino said.

The constitution review committee should decide within the next few months if the assault weapon ban will be on the November ballot.

Next: Game 5 is Tampa Bay at Colorado. Watch Friday at 8pm on ABC.