Deputies: Registered sex offender traveled across counties to have sex with 11-year-old

A registered sex offender from Plant City was arrested by the Sarasota County Sheriff's Office after they say he traveled to the county to have sex with an 11-year-old girl.

SARASOTA COUNTY, Fla. — A registered sex offender from Plant City was arrested by the Sarasota County Sheriff's Office after they say he traveled to the county to have sex with an 11-year-old girl.

Deputies say 30-year-old Stephen Roa met the girl through social media and told her he was 19. He drove from Plant City to meet the victim on her way to school, deputies say. The victim told deputies when she met up with Roa she told him her age then performed a sexual act on him.

"Our children are our future; they are our priority and they should be protected from predators like this man," Sarasota County Sheriff Tom Knight said. "Now more than ever parents need to look at their child’s phone, learn passwords, demand answers and always contact law enforcement if something doesn’t seem right."

Roa is a registered sex offender after a 2011 arrest for lewd or lascivious exhibition on a victim under 16. He was given ten years probation, but it was terminated in 2016, according to the sheriff's office.

The investigation into Roa was launched on August 23 when deputies in Sarasota were told by a parent of the 11-year-old that she had exchanged sexually explicit photos with Roa through social media.

Roa met his victim through a live-streaming video app called, "Bigo Live" before they began communicating through the app, "SnapChat."

Roa is facing four felony charges including lewd or lascivious molestation on a victim under 12; traveling to meet a minor for sex; seduce, solicit, lure or entice a minor and failure to provide internet identifies within 48 hours of sex offender registration.

A sex offender must register a new address with their local sheriff's office with 48 hours of relocation, and must also provide their email address and social media information — including usernames. That's according to the Florida Department of Law Enforcement.

The sheriff's office has re-issued its “Nine Apps Parents Should Know About” campaign that highlights mobile apps frequently downloaded by children that can be utilized by predators for purposes of exploitation. Among those nine apps, SnapChat is one of the most popular. 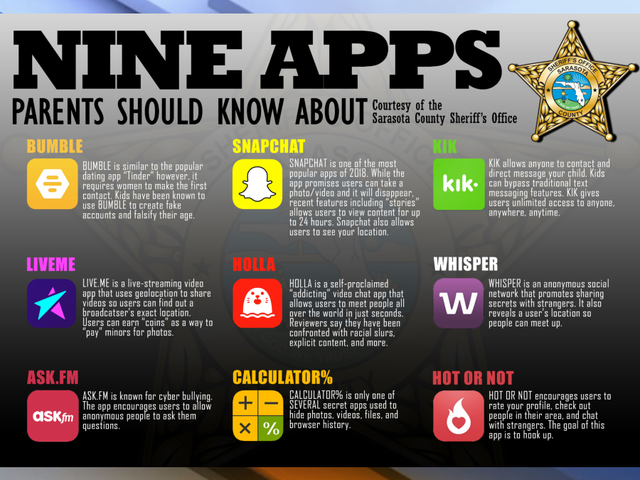