As former Lakeland City Commissioner Michael Dunn sits at home on house arrest, the city commission has voted to fill his seat temporarily until they can hold a special election in January.

LAKELAND, Fla -- As former Lakeland City Commissioner Michael Dunn sits at home on house arrest, the city commission has voted to fill his seat temporarily until they can hold a special election in January. 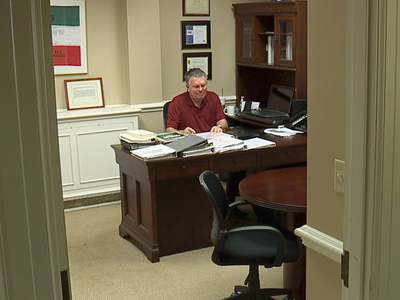 "You can put this in the archives, I have no intention of running for this seat,” Selvage said, confirming he is only serving the city because he was asked to and will go back to being retired when he isn’t needed any longer.

Candidates have already come forward to fill the empty seat.

"Historically running for commissioner has not always been as popular a position and subject to criticism,” said Mayor Bill Mutz.

He says so far, 8 or 9 people have shown interest although Mutz wouldn’t say who they are in case they change their minds.

Selvage says he has mixed emotions about filling in but says he wants to help the city and community out.

"I wish this had never happened. Like a lot of people in Lakeland, I think we’re sort of numb about what’s happened in the last few weeks,” he said.

The state attorneys office chose to charge Dunn after they say he shot and killed a man that attempted to steal a hatchet from his military surplus store. The security video has made national headlines -- he dodged reporters as he bonded out of jail Thursday night.

A special election will be held on January 15th. It’s will cost $65,000 and will come out of the city’s reserve fund.

ABC Action News stopped at Dunn’s house just down the street from the City commissioners office. Dunn's wife answered and politely told us they have no comment until they discuss things with their attorney.