The victim's family was too distraught to speak on camera, but they watched as deputies collected evidence in their neighborhood.

SUGGESTED: Fla. boy stabbed to death at a sleepover on his 13th birthday, mom says

"This child was brutally murdered by a 16-year-old with a baseball bat. There is no reasonable excuse for this. Zero. None. It should never have happened," Sheriff Judd wrote in a press release.

During a news conference Tuesday morning, Sheriff Judd said that 16-year-old Dillen Murray texted his friend, 15-year-old Giovanni Diaz, to meet in the wooded area near Caloosa and Lake Boulevards to smoke marijuana.

Watch the full news conference below:

When both teens arrived, Murray had an aluminum t-ball bat with him.

Sheriff Judd said that Diaz began telling Murray about "relations" he had with a girl that Murray was apparently "in love with" — this caused Murray to get angry and point his bat at Diaz.

With the bat pointed at him, Diaz said, "What are you going to do? Hit me with that bat?," and that is when Murray started beating Diaz with the baseball bat, according to Sheriff Judd.

A witness in the area saw Murray emerge from the woods, he allegedly told the witness, “I hit my friend with a baseball bat.”

The witness reportedly told Murray to go home and dial 911. When he called 911, he told dispatchers that he had hit his friend with a baseball bat, and he thought he was dead.

Deputies responded to the area just before 3 p.m. When they arrived, they located Murray and he told the deputy that he “whaled on Giovanni with a bat in self defense,” according to Sheriff Judd.

When deputies went out to the wooded area where the crime happened, Sheriff Judd said, "it was more than evident, that Giovanni had been absolutely murdered."

Sheriff Judd said initially Murray elaborated on his story of self-defense and stated Diaz had hit him in his arm with the bat and punched him in the face, but when deputies pointed out that he lacked defensive wounds he confessed.

"Dillen admitted to hitting Gio at least 9 times in the head and face with the bat," Sheriff Judd said. "During his confession, he admitted that Gio never attacked him, never hit him and that he, in fact, was the only one who did any hitting." 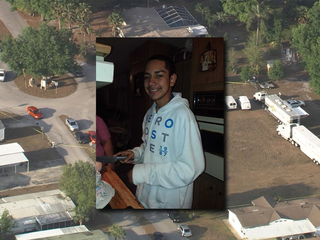 Sheriff Judd added that Murray told a witness, "I wonder what it's like to murder someone" two days before Diaz was found beaten to death in the woods.

The two boys lived in the same neighborhood, Murray referred to Diaz as his friend.

"I certainly don't think the victim's family would see it that way now," Sheriff Judd said.

Diaz was an 8th-grader at Frostproof Middle School, according to the Sheriff's Office.

"When you're talking about beating your best friend to death with a baseball bat, you have to take that in the context in which it's presented," Sheriff Judd said. "And in the position, he is right now, he has a lot of explaining to do. You cannot successfully explain that away."

Deputies say that Murray was arrested two years ago for two counts of battery, also against Diaz. He was also arrested last year for battery against his own father.

Murray was booked into the Juvenile Assessment Center Monday night. He was charged with first-degree murder, possession of marijuana and possession of paraphernalia

We stopped by Murray's home, but his family declined to comment.

It will be up to the state attorney's office if Murray is charged as an adult, Sheriff Judd stated they will be requesting that he is.