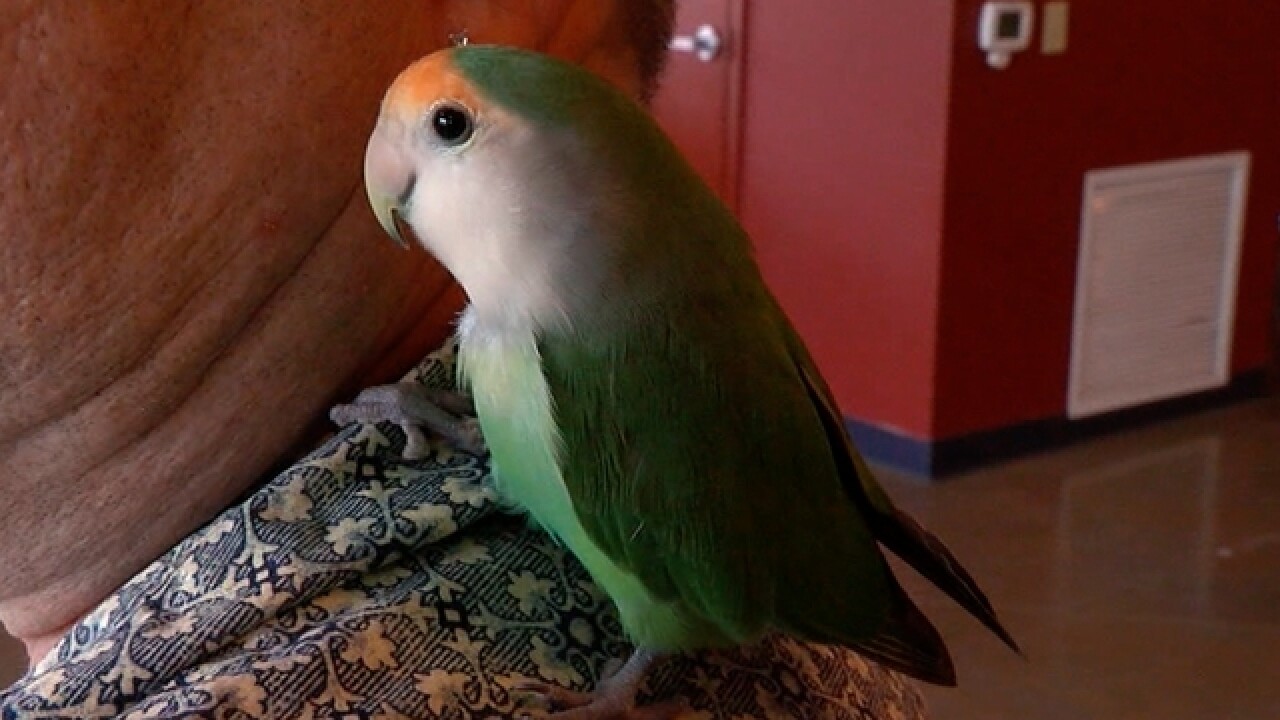 CLEARWATER, Fla. —  “He was lost in the woods of South Carolina! He’s not coming back!”

Mark Briggs was freaking out. Driving back to Florida on a business trip with his traveling companion "Little Tony", a lovebird, by his side, the Tarpon Springs man stopped at a South Carolina rest stop.

The bird, a bit agitated from the trip, flew away. That was two years ago.

Mark spent a couple hours looking for him. He finally gave up, but not before turning around at the Florida state line and driving back to find him to no avail.

Mark figured he would never see "Little Tony" again, who very well could have been a snack for a bigger animal.

But a year later, driving past that same rest stop, Mark stopped in. On a whim, he approached a maintenance worker and asked him if he had ever seen a little green bird with white puffy cheeks.

“The guy says, ‘Oh yeah, that little green bird. He used to climb up my leg and I’d feed him.’” said Biggs.

Mark couldn’t believe it. All the guy knew was that a woman had taken him.

That is when Clearwater marketing firm PostcardMania  got involved.

Mark had been a client in the past. When he told them the story, they were heartbroken but intrigued.

Mark spoke with Jennifer Taylor, who was the absolute right person for the job.

“I was wearing a T-shirt with my dog’s face on it,” said Taylor laughing, “so yeah, we were gonna help him find that bird.”

PostcardMania would eventually pay the whole freight to have almost 4,000 flyers, complete with a reward offer and a handsome picture of "Little Tony," mailed to veterinarians and animal shelters all over the Southeastern U.S.

It was a longshot, but about a week later Mark Briggs got a phone call.

It was from a vet in the deep woods of South Carolina. He knew a woman who had a bird who looked a lot like "Little Tony."

“He was out in the woods,” says Mark. “I’m surprised he was even on the mailing list!”

Mark drove to South Carolina. The bird “was a little sketchy at first” but then, after a few awkward moments, started nibbling on Mark’s nose.

“It was a miracle!” says Biggs.

PostcardMania also wound up paying the reward for "Little Tony" and to celebrate his long-awaited return donated $2,500 to the Pet Pal Animal Shelter.

“This company really just stepped up to the plate,” says Mark, as "Little Tony" tweets happily in his ear.