Nine dogs were found stuffed in a small dog crate that was tied shut and left in an alley in St. Petersburg Monday night.

Nine dogs were found stuffed in a small dog crate that was tied shut and left in an alley in St. Petersburg Monday night.

Jaime McKnight, found of the nonprofit tells ABC Action News the dogs are breeder dogs and were left in awful condition.

McKnight sent us pictures that show the dogs in the crate, with a type of rope on the outside. 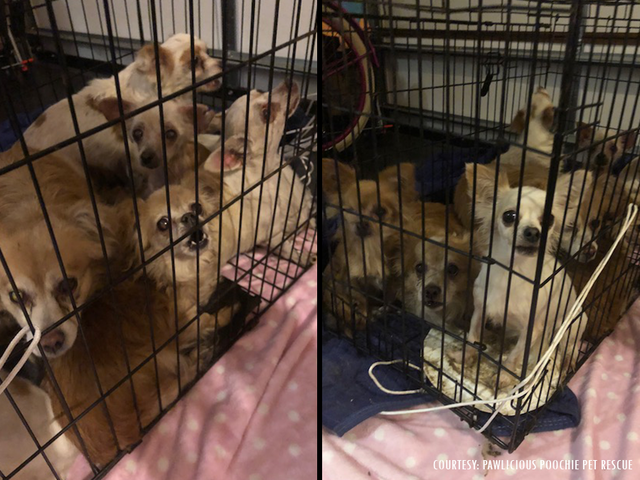 The dogs were covered in feces and fleas. One dog is missing an eye, and the dogs are suffering from a skin condition -- McKnight also believes some of the dogs may be pregnant.

The St. Petersburg Police Department is investigating the case as animal cruelty.

A spokesperson for the department tells us that the dogs were found dumped in an alley off 15th Street North.

Yolanda Fernandez tells ABC Action News the officer who responded could not get ahold of animal services to come retrieve the dogs because it was after hours, so the officer worked until he found a rescue that would take them in.

"This officer went out of his way," she said.

McKnight's non-profit is working to cover their veterinarian costs. She estimates each of the nine dogs will cost over $1,000 to save. They are being treated at Partridge Animal Hospital in St. Petersburg.

On Wednesday morning, McKnight gave ABC Action News a look at the dogs. She says they're doing much better. The dogs are barking, wagging their tails, and even biting -- which in her eyes, is a good sign.

This Saturday, one veterinarian will perform surgeries on all nine dogs. The five males and four females will be spayed or neutered and undergo oral surgery. They'll lose most or all of their teeth, but it won't affect them too bad, the dogs will just have to eat soft dog food.

McKnight says the dogs will be profiled on her Facebook and up for adoption by this weekend.