Gasparilla 2022: Everything you need to know about the annual Pirate Fest
NewsPasco County

A family is now pleading for help after their daughter was hit and killed crossing a dangerous Pasco state road on New Year’s Eve.

PORT RICHEY, Fla. — A family is now pleading for help after their daughter was hit and killed crossing a dangerous Pasco state road on Saturday night.

People who live and work near the crash site say there’s already been some dangerously close calls.

A memorial now marks the spot where Angel St. Pierre-Calafiore died Sunday running across the street.

Employees say St. Pierre-Calafiore was at Cricketers, a Port Richey smoking lounge when she wanted to go across the street to the gas station for cigarettes.

But a 2004 Dodge hit her, killing her as she ran across the Westbound lanes of SR-52 in the dark.

“Her life was cut too short,” said Renee Piehl, who spent her shift talking and joking with St. Pierre-Calafiore. “It really was.”

St. Pierre-Calafiore died shortly after Piehl left the lounge when her shift ended around 7:30 p.m.

She was not in a crosswalk — that means the driver is not at fault.

Others say they’ve made that same run across the street many times but now say it’s just not worth it.

ABC Action News found there have been more than a 150 injury crashes in the .3 mile stretch surrounding the crash site within the last five years.

Not including Saturday night’s crash, there have been five bicycle/pedestrian related crashes from 2013-2017 along the half mile stretch between the signalized intersections of SR 52 and US 19, and SR 52 and Zimmerman. See below for yearly breakdown, Saturday’s crash was the only one in 2017, according to FDOT.

Of the five other crashes, 80% occurred during daytime hours, according to FDOT.

The majority of crashes involved right-turning vehicles out of side-streets/driveways colliding with bicyclists/pedestrians traveling along the sidewalk, according to FDOT.

“I don’t want to see anyone else dead because they’re crossing the road,” said Romeo St. Pierre, the victim’s father.

Angel’s father says the disabled nurse couldn’t walk down to the corner to get the crosswalk after several spinal injuries.

He’s seen other pedestrians putting themselves in danger as well.

“While my daughter was lying in that road for five hours, six people crossed right here while she was lying in the road. That’s why it’s dangerous and people don’t realize how dangerous it is,” St. Pierre says. “I need a crosswalk.“

Florida Department of Transportation now says they will do a traffic study near the crash site to see if it meets the criteria for a crosswalk.

Florida Highway Patrol troopers are still investigating the crash and are examining whether the driver was drinking.

Services have not yet been announced for St. Pierre-Calafiore. 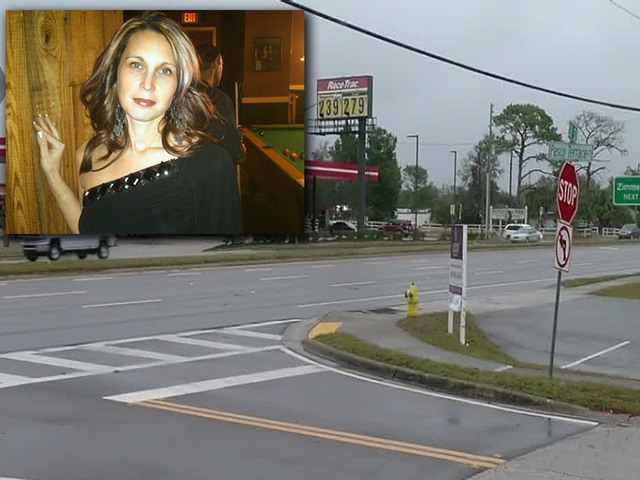