Home surveillance video shows a young father in Pasco County crash into a diesel truck after the truck driver ran a stop sign and took off.

PASCO COUNTY, Fla. — Home surveillance video shows a young father in Pasco County crash into a diesel truck after the truck driver ran a stop sign and took off.

Video shows the truck run a stop sign at Starkey Road and Alico Pass before the driver of a small 99 Honda Civic was forced to drive into the truck going 45 miles per hour.

Zachary Bennett was rushed to the hospital shortly after crashing into the unidentified white Chevy diesel truck.

"By the time I got out of my car, they gunned it," he said. "They just floored it and took off and then I knew they were running away."

Bennett was driving to work at 12:30 a.m. on June 12 to install IP cameras and a networking system for a company in Tampa.

The self-employed computer technician was asked to work after business hours, forcing him to drive in the middle of the night.

"They left me, not knowing anything about the accident, other than my car was totaled," said Bennett. 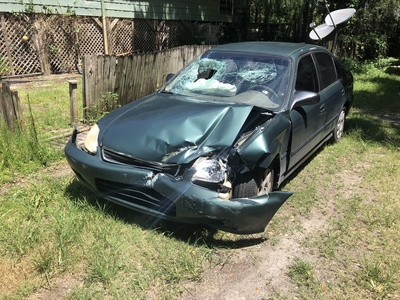 Bennett said the green Civic is the family's only mode of transportation for work and family needs.

The computer technician has two young boys he provides for, a one-year-old and a two-year-old with Down Syndrome.

"Our car is gone," said Bennett. "My son has a lot of medical appointments."

Bennett was hospitalized with broken bones in his hands. He has not been able to work since the crash since he relies on his hands in the computer industry.

"We are going to lose everything because of this selfish person behind the wheel of that Chevy diesel truck," said Bennet's wife, Jessica.

A spokesperson with Florida Highway Patrol tells us they are investigating the crash, but they have not been able to find the truck that took off.

Bennett hopes someone can help identify a similar style truck with damage to try and get answers and help for his family.

In the meantime, the family tells us they are trying to find a new means of transportation to help get to work and medical appointments.