DOVER, Fla. — Two suspects who Hillsborough County deputies say stole a truck are in custody after running from law enforcement officers and shooting a neighborhood dog.

At about 1 p.m. Thursday, Dec. 14, a deputy on routine patrol spotted a possible stolen vehicle near Milagro Court and Blackjack Road in Dover.

The deputy was turning around to try to pull over the vehicle when it took off, sheriff's officials said. The fleeing vehicle ran a stop sign and eventually slowed down, so two people could jump out and run from the scene.

Both suspects, Thomas Nolasco and Jonathan Lozada, ran through several fenced yards and encountered several dogs in one of the yards. One of the suspects fired a shot and hit one of the dogs.

Ryans wasted no time chasing after the suspects, forcing them into a nearby cow pasture.

The suspects ran and hid in a nearby swamp until they were found by Hillsborough sheriff's canine deputies and taken into custody.

Nolasco is charged with grand theft of motor vehicle, resisting officer without violence and three counts of probation violation.

Hillsborough County Pet Resources will assist in providing treatment for the dog who was shot. The family expects to learn more about the dog's condition Friday morning.

Deputies have recovered a gun from the scene. 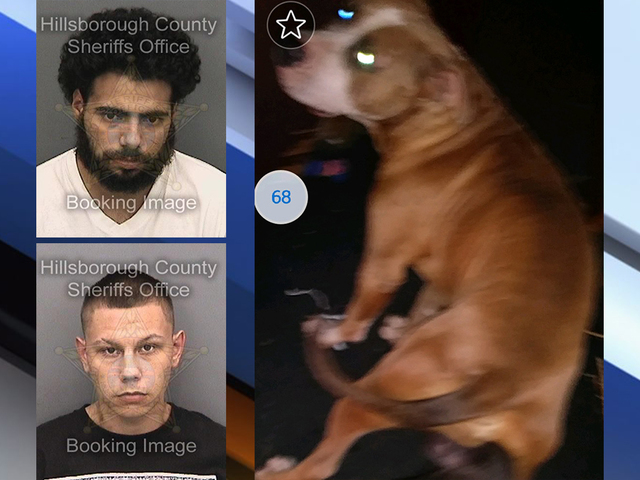